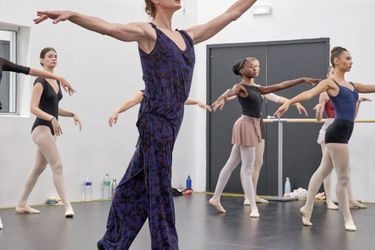 The former star of the Paris Opera ballet joins the jury of “Dancing with the stars”. Meeting with a very non-academic personality.

Back to school day in Tinqueux, a town in the Reims suburbs. Right in the middle of a shopping area, between the optician and the hairdresser, stands a red brick building called Académie des sacres. A name that has something to dream about, and, behind it, a real talent factory: around 70 students, teenagers and young adults selected on the shutter, are trained there by the best teachers in all styles of dance, and much more . Singing, theatre, tap lessons… “I wanted to make it my ‘Fame’”, jokes Marie-Agnès Gillot, who is the artistic director.

In the studios, budding artists are already bustling about, performing tricks and capers, although the paint is still fresh. A stupid delay in the delivery of the stairs prevents Marie-Agnès Gillot from receiving us in her office… It doesn’t matter, the star, who left the Paris Opera in 2018, drinks her coffee at the local PMU, with ease. For her, this month of September promises to be busy: in addition to the Academy of coronations, she is the new juror of “Dancing with the stars”, on TF1, and publishes her autobiography, “Sortir du cadre”. A formula which she has long made her mantra.

What’s next after this ad

Paris Match. You join the jury for the twelfth season of “Dancing with the Stars”. Why did you accept this new challenge?
Marie-Agnes Gillot. It’s no secret that the production of the show has been after me for a long time. But as long as I was a dancer at the Paris Opera, I had my head too high and not enough perspective to judge others. While you have to know how to take distance to succeed in this exercise. And then, in truth, I especially wanted to please my mother, who died last year. She liked this program and regretted that I did not participate in it. During bonuses, I will obviously think of her.

What’s next after this ad

Were you a loyal viewer of the show?
Yes, from the first season. I watched it at my mother’s because, at the time, I didn’t have a television at home. I have one now, because my son, Paul, was asking for one. I have no snobbery about it. On the contrary, I like the idea of ​​democratizing dance on television. I had even already been a juror in “The best dance” broadcast in 2011 on W9 then on M6. The bet was risky, because it was a show launch.

Which judge will you be? Benevolent or on the contrary very severe?
I will be like a teacher. I want to see them evolve, metamorphose. At the first prime, I will see their level and then judge their progress in ten weeks. Also, the candidates will not be my buddies. I don’t want to know their life, to be completely objective. They’re all adding me on Instagram right now, but I don’t want to follow them back. [Elle rit.]

Did you know your fellow jurors?
Bilal Hassani, I met him at a party. I find it great! Chris Marques, I haven’t really had the opportunity to meet him before. Obviously, François Alu was at the Paris Opera with me, we danced together. But more than fifteen years apart separate us, so I still see him as a baby. [Elle rit.] He was recently crowned star, I congratulated him.

Are ballroom dancing, at the heart of this show, not too far removed from your universe?
At the dance school of the Paris Opera, when you are a child, you start by learning what is called folklore, that is to say waltzes, minuets, bourrées… These ancient dances are the basics of today’s ballroom dancing. So I know them and will have no trouble judging them. Besides, it makes me want to get back to it. If TF1 offers me to dance a tango or a salsa, I will do it without hesitation.

In 2018, Patrick Dupond had agreed to be a juror of “Dancing with the stars”. Disappeared in 2021, he meant a lot to you. Again, this weighed in your choice to accept?
His death affected me a lot. Patrick was my grandfather. I was only 14 when he took me under his wing. He was open-minded and good-natured, which is not so common in this environment… Yes, I wanted to follow his path.

You multiply the projects and are always where you are not expected. This jack-of-all-trades side is even your trademark.
At the Paris Opera, my nickname has always been “the UFO”. A reputation that made me suffer when I was a child, because it’s an age where you don’t like to be considered different. But today, I assume it completely and have no career plan. I follow my desires. I paint, I write… Maybe in some time I would like to make a film. Who knows?

Maurice Béjart said that a dancer was “half nun, half boxer”. A definition that suits you perfectly?
I recognize myself, yes. The “nun” side is entering into faith with her art. The boxer is the inner combat, humble, as with the samurai. When you throw a punch, you know you’re going to kill. In both cases, nun or boxer, there is a real spirituality.

If TF1 offers me to dance a tango or a salsa, I will do it without hesitation

On September 15, you release your autobiography, aptly titled “Sortir du cadre”. We immediately perceive your taste for words. Would you have liked to be a poet if you hadn’t been a dancer?
Why choose? You have to have several lives in one. I’ve been writing poems since I was little. Besides, you know what my mother said to me one day? “Marie, you write better than you dance.” Nice! I who have struggled to dance for forty years. [Elle rit.]

In this book, you trust a lot. Like it was some kind of therapy. You recount a significant episode: your father abandons you when you are only 4 years old.
I wrote this book during confinement, so it may be a form of outlet. I needed to remember my thirty-three years at the Paris Opera, but also my childhood. The abandonment by my father led me to undergo psychotherapy when I was 19 years old. Without it, I don’t know what I would have become. I still have this image of me, in the legs of my mother, and my father yelling at him… A trauma.

After that, you wanted to adopt the surname of your mother’s new companion, Jean-Paul Gillot.
It was he, my stepfather, who raised me. He was a cook in my school. I was a fan of his. Every noon, he went from table to table to ask the children if they had liked lunch. One day I asked him if he didn’t want to meet my mother. He agreed, I took him home and it worked. I played Cupid.

You joined the corps de ballet at the Paris Opera when you weren’t even 15 years old. Didn’t you become an adult too soon?
I too quickly lost the carelessness of childhood. At 15, I already had my apartment, my bank card. I remember I was scared. I had the head and the body of an adult, the look of an adult, so I was considered as such.

In the harsh world of dance, have you learned to toughen up?
I had a competitive spirit but I was never a nuisance. Later, Brigitte Lefèvre [directrice de la danse de l’Opéra de 1995 à 2014] told me that I was the only one who had never criticized others in front of her. While most of the girls would go to his office to swing on me and try to steal my roles. Me, I always stayed straight in my boots.

One has the impression that the career of a dancer is akin to a long quest for perfection. Have you ever reached it?
I touched it sometimes, but it only lasts a few seconds. During a performance of “Cendrillon”, I experienced a moment of infinite suspension: I had achieved the perfect gesture, I could have remained in this position for hours. A truly exceptional moment.

Your farewell to the Paris Opera on March 31, 2018, are also an unforgettable memory?
That evening was nothing exceptional for me: you can’t dance, one last time, so I danced as if I was going to come back to this stage the next day. It is only at the moment of salvation that one becomes oneself again. There, there was certainly emotion, but no heartbreak. I don’t like to say goodbye. So, after twenty minutes of standing ovation, as the applause didn’t let up, I left the stage… I didn’t want to break the standing ovation record. [Elle rit.]

At the Opera, as a child, I suffered from being nicknamed “the UFO”. Today, I completely assume my desires!

Do you ever get nostalgic about your years at the Paris Opera?
I’m super proud of what I’ve done, but I wouldn’t like to go back. Or perhaps as a guest dancer, or even as a teacher, but for a few rare occasions.

Would you see yourself taking over from Aurélie Dupont as dance director?
One day maybe, but in a very long time. I know my old house: it’s a real basket of crabs. And this position is the worst place. Power is often a poisoned gift, it doesn’t interest me. In the past, you were appointed director of dance, but today you have to apply yourself. I hate applying, I prefer to be picked up.

From now on, you devote yourself to teaching, with the dance school that you run, here in Tinqueux. A true calling?
Whether in a show on TF1 or in a school, I simply like to transmit. The idea of ​​this academy was born thanks to a couple of enthusiasts, Célia Dehauteur and Cédric Gobancé, who came to make this proposal to me three years ago. I immediately signed. I accompanied them during the realization of this project and, today, I teach there several days a week. My career at the Paris Opera was difficult, with abuse, trauma, but I consider, despite everything, that I was spoiled rotten. So I want to give back a hundredfold what I received. At the Academy of coronations, there will not be this pressure and these humiliations that I have known, student. But on the contrary, a lot of kindness and encouragement. Which takes nothing away from hard work and success.

Your passion for dance, do you share it with your son, Paul?
He says he wants to be a footballer-dancer. Funny job! [Elle rit.] He has just started lessons at Houlgate, in Chantal Ruault’s class, where I started. So the loop is closed. I didn’t necessarily want him to dance, but it’s innate to him. Maybe it’s genetic?

Marie-Agnès Gillot in “Dance with the stars”: “The candidates will not be my friends”