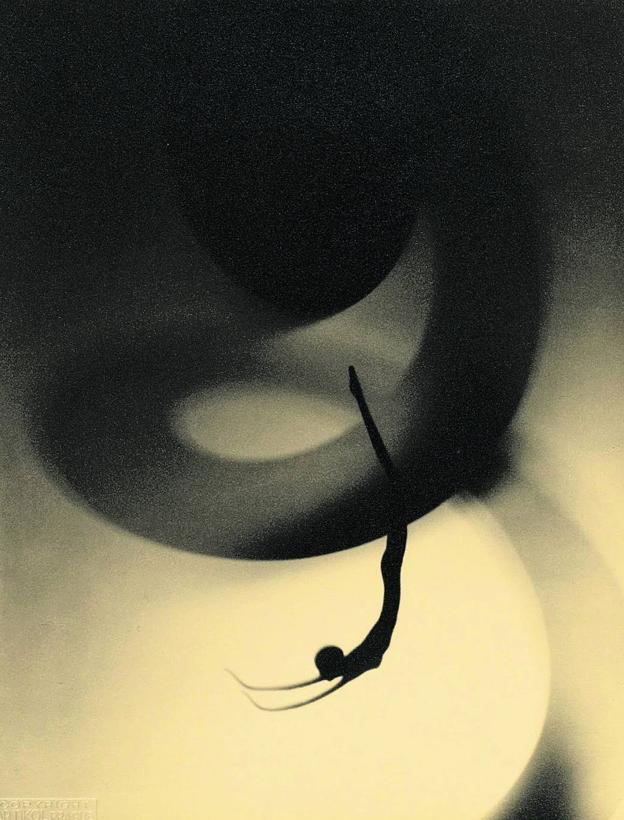 One of the most famous images of the photographer Frantisek Drtikol.

Czech photographer František Drtikol (1883-1961) brought a breath of renewal to photography with his terrifyingly lyrical images, where shapes, light and shadow come together in a soulful dance. Drtikol was born in 1883 in a mining town called Príbram, in what was then the Austro-Hungarian Empire, and grew up with a desire to draw and paint. After a period of military service, he moved to Munich to study art.

At the turn of the century, the capital of Bavaria offered an incredibly fertile creative environment. It was the time of Art Nouveau and, there, he focused mainly on drawing and photography. After studying at the Lehr und Versuchsanstalt fur Photographie, and after working in important photographic studios in Germany, Switzerland and Bohemia, he moved to Prague where he opened a photographic studio. He quickly achieved a great reputation as a portrait painter. His clientele included many of the most notable public figures of the day, ranging from captains of industry and political figures to famous artists and musicians. Tomáš Masaryk, the first president of Czechoslovakia; the composer Leos Janacek, and almost all the artists who lived in or near Prague were among his clients.

Within a decade, his studio spread his fame throughout Europe, mainly thanks to his portraits. It was that genre that allowed him to lead a comfortable life. However, Drtikol built his reputation as an artist through his approximation of the nude. The portrait of him was elegant and refined, but the nude studies of him were daring and innovative. The epitome of the avant-garde. Obsessed with the female body, believing it to be the genesis of the soul and beauty, his nudes, poetic and dramatic at the same time, demonstrate his mastery in the art of the play of light and shadow.

Drtikol demonstrated his willingness to incorporate any element that might make his nude studies more powerful. Thus, in addition to the inclusion of Art Deco details, he used lighting techniques developed for silent films and integrated elements of modern expressive dance. She “frequently contrasted the suppleness of the female body against solid, inflexible geometric forms.” Despite those differences, she highlighted the strength found in both forms, the human and the geometric. It is a photograph ahead of her time in which the body is shown with great naturalness, beauty and elements typical of futurism, such as movement, or of cubism, geometry. The use of light, shadows and plasticity are some of the characteristics that made her nudes a reference in her time, as critics remind us, with very thin, almost subtle and abstract bodies.

Indeed, František Drtikol’s early nudes are influenced by Art Nouveau and Symbolism. However, and under the growing influence of the photographic avant-garde, his style radically changed around 1923, when he began to conceive of nude bodies not as mere receptacles of the soul but as forms endowed with aesthetic significance. Geometric decoration and cast shadows were replaced by painted backgrounds and dreamy models gave way to dancers. He intensifies the dynamics of the composition, prioritizing lighting and movement in his work. And little by little, in his images the pictorialist and symbolist style give way to modern compositions closer to cubism. The composition allowed for a new geometry, the lighting was contrasted and the nude was fragmented.

Drtikol took very careful and serious care of his photographic sets. Lighting and geometric shapes such as waves and circles are used as backgrounds and at the same time, they merge with the female bodies and play with them, “paining for the purity of lines and beauty”, as some scholar has written. And it is that Drtikol was a photographer intrigued by light. He sought in it to give more meaning to the human body by rediscovering its aesthetics, while endowing his photographs with a timeless rhythm and plasticity with a mystical aura. For Jan Menec, his work reflects “the intimate tear of his search for the absolute.”

Scholars of his work have said that the desire for beauty and dissatisfaction with reality always coexisted in him. For this reason, in the mid-1930s, human forms began to cease to satisfy him and his impetuous search for the perfection of beauty led him to a drastic decision. In that period, his interest in the world of spirituality allowed him to approach painting, meditation and Eastern religions, moving away from photography. In his biography he wrote: “I returned to my old love, to painting … I devoted myself to Western and Eastern philosophy, to Christian, Greek, Indian, Tibetan and Chinese.”

Drticol embodied the Czech spirit of the interwar period and the vitality of the Prague scene. There he was the famous portraitist of the fashionable elites, and in Paris, where the publication of his nudes established his international reputation, he established a decidedly innovative photography thanks to his masterful technique, his originality and his conceptual depth. Theirs are nudes more of the soul than of the body.