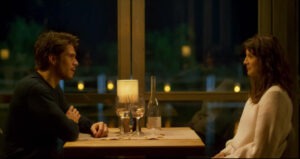 Doing a listless zapping among the cinematographic proposals of a famous platform, I come across a film with a promising trailer: sure, the title is a bit dull, the length is considerable, but it’s worth a try.

The evergreen soundtrack is captivating “Dancing in the moonlight”, song from 1973 by King Harvest.

Let’s get to the story.

become inseparable, cultivate their respective talents over time: with more luck he, who will rise to a brilliant career as a fantasy storyteller thanks to the intervention of his wife, who will send his initial works to a publishing house, more quietly she, who will finish to settle for giving piano lessons to kids.

At the height of success Raphael, increasingly absent as a husband, torn between social life and self-celebration, to give a twist to his fantasy saga will decide to “kill” the character of Shadowcompanion of the hero Zoltan protagonist of his books and built on the image of his wife.

The ideal assassination will lead him into a space-time paradox where his life will have taken place in a different way: unmarried, professor of literature in a suburban high school, he will work with tragicomic implications to regain his lost life through the recovery of Olivia’s lovewho in her current dimension is a successful pianist about to marry her agent.

The two will strike up a new sentimental conversation “with reversed roles” which will lead us almost to the end of the film, but when Raphael realizes that the recovery of the submerged reality would not be resolved in favor of the happiness of his beloved, this time he will be ready to sacrifice his own desires in favor of her realization finally catching the sense of the true nature of love and thus accepting to remain consigned to the new life on the sly.

The surprise ending will draw a turn that will lead us down the corridor of the ineluctability of fate.

His friend Felix is ​​an excellent sidekick, the only one to support the protagonist’s crazy beliefs on the basis of questionable insights, as a science professor, of Einsteinian theories on parallel dimensions, at stake in the sequence of events that overwhelms the castin the manner of French cinema, but not too much: to him the task of lightening the romance atmosphere with an attitude divided between the demented and the talking cricket of the context.

The protagonist in turn of a sentimental sub-plot which will turn for the better thanks to the intercession of the ethically come to his senses Raphael, will play the role of facilitator in the arc of transformation of our main character, gaining the sympathy of the viewer for its dimension between the carefree and the reflective.

In the constant background Serenade Of Schubert, from the unripe execution of the young Olivia to her return in the four-hand sonata of the two protagonists, just to keep the amorous atmosphere alive.

Smooth? I don’t know: I spent a pleasant two hours.