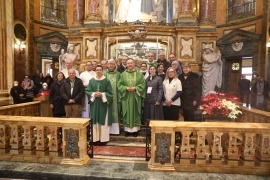 (ANS – Turin) – The Spirituality Days of the Salesian Family 2023 ended on the morning of Sunday 15 January. The Mass presided over in the Basilica of Mary Help of Christians by the Rector Major and Father and Center of Unity of the Salesian Family, Fr Ángel Fernández Artime, represented the spiritual summit and community of this appointment, while the subsequent closing session allowed to pull the strings of the event and to project this great movement of people dedicated to the salvation of young people towards a new year to be lived in a spirit of mission and service towards the great human family.

During the Eucharist, the Rector Major began by emphasizing the value of a celebration that sees the whole Salesian Family represented in the place where it all began, and exclaimed: “Beloved Father Don Bosco, your family is here with you today ”.

Then, continuing his reflection on the day’s readings, the X Successor of Don Bosco addressed the invitation to be light for one’s neighbor – “an easy phrase to say, even if the difficult thing is to experience the darkness”. Therefore, he exhorted to be open to one’s neighbor and the ability to transmit humanity and positivity, in the awareness, as Don Bosco taught, that in everyone there is a seed of good that needs to bear fruit.

Looking at the great human family, made up of many people and many who seek to do good, Fr Á.F. Artime added again: “We believe in Christian humanism and we have a Salesian optimism by inheritance; for this reason we believe that we can be a leaven, simple and humble, for many people. And this is the Gospel, this is the building of the Kingdom”.

Finally, he recalled how the Salesian Family born with Don Bosco was a true gift of the Spirit, which has sustained it for over 163 years; for this he reminded to always rely on the Holy Spirit and to follow what He inspires, warning against trying to promote oneself or one’s activities.

After the Mass, which ended with a moment of gathering among all the Managers, Coordinators and Representatives of the various groups of the FS around the remains of Don Bosco, the approximately 300 participants in the GSFS 2023 divided themselves into small groups to summarize the work carried out in the previous days, and then met one last time in the Teatro Grande of Valdocco for the final session of the Days.

Opening the session, the Central Delegate of the Rector Major for the Secretariat for the Salesian Family, Fr Joan Lluís Playà said: “We have lived many moments in these Days, this is the moment to say what we carry in our hearts, and to express more interesting and urgent aspects for our group and the whole Salesian Family, to live and bear witness to this social dimension of the Salesian charism”.

Co-responsibility, pastoral integration between religious and laity, joint and calibrated formation for the different identities, greater mutual knowledge, removal of certain presumptions of superiority, being “salt”, as well as leaven, in the great human family, ability to get one’s hands dirty, presence among young people, strengthening of the sense of belonging, outgoing Salesian Family, educational responsibility of the laity, shared planning, care for relationships, networking… As the various secretaries of the groups took to the stage, a large number of ideas have been shared, to trace a whole path to be lived, together, at least for a whole new year.

“All of this is fine gold. Let’s do it and we will live. There is nothing else to add” Don Playà said by way of conclusion.

Before declaring the GSFS 2023 definitively closed, there was still time to launch two major events open to the whole Salesian Family: the second edition of the Salesian film festival “Don Bosco Global Youth Film Festival” (13-14 October 2023) and the World Congress of the Association of Mary Help of Christians (29 August – 1 September 2024 – Fatima, Portugal).

Italy – “Beloved Father Don Bosco, your family is here beside you today”. The 2023 Salesian Family Spirituality Days have ended

“Towards Venice” the music of Antonio Fresa in a glass
When Extinction Rebellion opens up to spirituality
Thérèse of Lisieux, the offering of love | RCF
Tweet
Share
Share
Pin