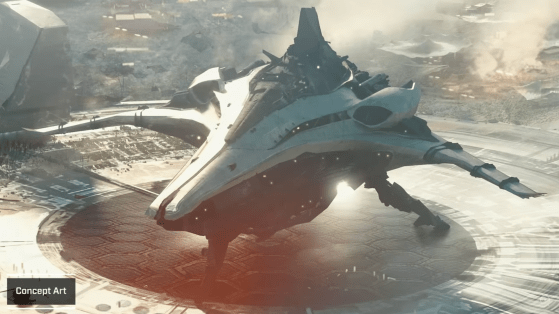 This episode of Inside Star Citizen is all about the Merchantman, the most iconic ship produced by the Banu aliens. As the ship is still in the production phase, everything presented in the video may still be subject to change.

The Merchantman is currently in the greybox phase for the exterior, while the interior is a little less advanced. The challenge for the developers is to fit everything that should be in the ship.

Here is the information we retain in this video on the exterior of the ship:

Inside, the developers show us some of the pieces.

The bridge, located above the ship, is huge both horizontally and vertically. It has a large canopy which allows the crew to have a panoramic view of the exterior. As the Banu work as a family, they do not have a captain. So there is no special seat for this role. On the other hand, there is indeed a seat for the pilot and others for the operators of the remotely operated turrets. The seats use Xi’an technology and can gain height by magnetic levitation.

Aft of the bridge there are changing rooms and escape pods. You can also climb to the entrance of the main turret. The latter is in a huge room decorated with stars. The gunner’s seat elevates and the top of the ship opens to give a wide field of view (this opening animation has not been shown).

Going down behind the catwalk, we find a room called the Sanctuary. The Banu are very spiritually oriented and this coin is supposed to bring them good luck in their business.

On one side of the sanctuary is a medical room, with a medical bed and two recovery beds which have the particularity of being in liquid or even gelatinous form. A storage room for medicines is adjacent to the medical room.

The crew has quarters with a common room all round, and in a very refined style.

The ship has a hangar that can accommodate a secondary ship, presumably a Defender or other device of comparable size.

Customers and guests have a special entrance, which takes them to the market or trading room.

The market is an oval-shaped room on two floors, with alcoves for displaying goods all around.

The negotiation room is a meeting room with a large table and seven seats. Two delegations of three people can take place on each side, and a mediator can be installed at one end. Next to this room there are rooms for important guests.

The cargo bay, which can be seen from the trading room, is huge and containers can be stacked several dozen meters.

Since it’s a Banu ship, the developers wanted it to be welcoming and understandable to all races, but at the same time fit the size and customs of the Banu. Because they are a bit taller than humans, the rooms and openings are taller than on a UEE ship.

To reinforce the extraterrestrial aspect, the developers built the ship curvaceously, and revisited common concepts: for example the doors look like doors, but open in an unusual way for humans. The use of Xi’an technologies also contributes to this atmosphere.

Inside Star Citizen: Inside the Merchantman