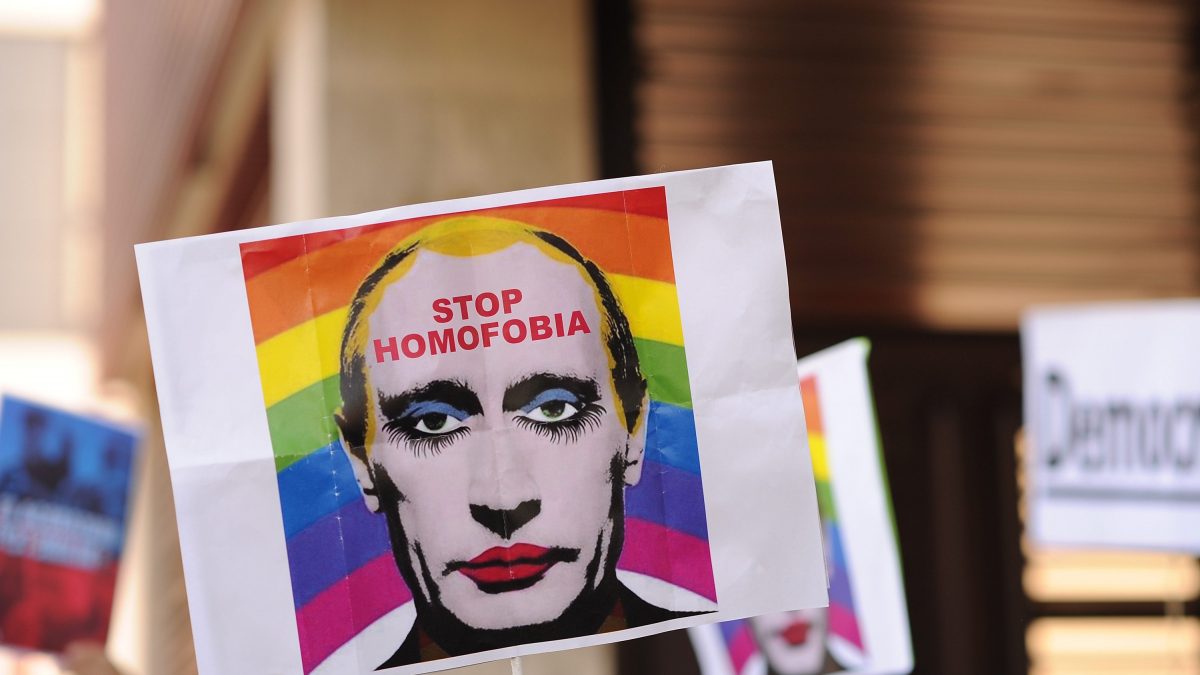 In Russia, LGBT+ gags. Also forbidden to talk about it. Fines of up to 80 thousand euros for “propaganda of non-traditional relationships. The new law follows a decree on “spiritual and moral values”. The regime perfects the ideology in support of the war. Demonizing an entire social group.

A law just approved by the Duma, the equivalent of our House, effectively prohibits mentioning the LGBT+ community in the country of Vladimir Putin. It’s not just a way to discriminate against queer people. It is one of the initiatives taken by the regime to codify Putinism in the light of alleged traditional values. In order to have an ideology for the “existential war” between Russian civilization and the “decadent” West. The Kremlin gears up for perpetual conflict. And it involves gays. The new legislation prohibits, among other things, “propaganda of non-traditional relationships” and any information about LGBT+ people directed at people of all ages through the media, the internet, advertising, literature and films.

A sentence to silence

In Russia, a controversial 2013 law already banned “gay propaganda” against minors. Now the prohibition concerns everyone. The fines go up to 5 million rubles, just under 80,000 euros, if the offense is committed by an organisation. “The law is obviously discriminatory,” he tells Fanpage.it Dilya Gafurova, director of the Sphere Foundation — which defends the rights of the LGBT+ community in Russia. “Full discretion is left to the authorities, as is typical of the repressive rules of our government. Anything could be ‘propaganda’. For us it is a condemnation to silence. But the provision will have serious effects on the whole of society: bookshops, cinemas, theaters and other businesses that could even involuntarily promote ‘non-traditional relationships’ will suffer. Gafurova speaks to us via Telegram from St. Petersburg. Her organization continues to operate more or less covertly but was formally shut down by the Ministry of Justice two months after the invasion of Ukraine: it undermined “the moral foundations of Russia,” according to the relevant decree. Putin’s regime has its own coherence.


“Putin is no longer aiming to win, he is stalling”: this is why Russia withdrew from Kherson

“The most disturbing element in the new law is that it is highly symbolic”, underlines the director of Sphere. “The state seems to be saying that LGBT+ people are an invention of the West, the result of outside interference.”

Indeed, Duma Chairman Vyacheslav Volodin wrote in Telegram: “The provision will protect our children and the future of the country from the darkness that comes from the United States and European countries”. Words in tune with the accusations of “Satanism” that now not only propagandists but also those with high political responsibilities are addressing the West.

But if the tone is pseudo-religious or moral condemnation, the substance is warlike: “The LGBT community today is an element of hybrid warfare”, MP Alexander Khinstein, one of the initiators of the law, told Reuters. “And in this hybrid war we must protect our values, our society and our children.”

Last November 9, Vladimir Putin signed a decree making a list of “traditional spiritual and moral values” of Russia, “to be preserved and strengthened”. At the same time, the president established a compulsory ideology course for universities. Until now, indoctrination stopped at schools. The course will include history lessons in Putin’s reinterpretation that mythologizes the homeland, others on traditions and values ​​and a part on “Russia and the world”, to justify isolationism and opposition to the West.

The proposed vision is based on the conflict between “us good Russians” and “them”. It requires a mobilization of society in support of the ruler. It delegitimizes anyone who does not conform to the national idea and the values ​​it proposes. Like the LGBT+ community.

“Scientific Putinism”, the political scientist Andrei Kolesnikov defined it ironically, comparing it to the “scientific Communism” that he had to study in the days of the USSR”. It has little scientific, if only because it is anti-modern and is based on nationalist, imperialistic and messianic notions dear to the tsars. But it is essential to motivate the ongoing war. The regime’s commitment to systematize its ideology suggests that it is counting on a long period of conflict. However it ends up in Ukraine. Meanwhile, ideology demonizes an entire social group.

“Clearing a negative attitude towards LGBT+ people by law will lead to an increase in society’s hostility and stigmatization towards us,” he complains Dilya Gafurova. “Our community should not be used as a tool of ideological opposition”. But that’s exactly what’s happening. It is true that many Russians do not think like the government and do not care about the sexual orientation of others. Trade associations such as that of film producers and cinema owners complained during the debate that preceded the launch of the new provision. The pounding propaganda, however, convinces more and more people that the West is evil and non-conformist citizens are its fifth column.

Some recent episodes would almost make you laugh, if they weren’t quite worrying. In Makhachkala, the capital of the Russian republic of Dagestan, the designer Elnara Askerova was sued for “propaganda of non-traditional values” against minors for having two young men wearing make-up on the catwalk. A passerby from a window took photos and videos of the event and posted them on social media. Hence the accusation of disseminating LGBT+ content to which even minors could have access. Yet it was not she who filmed the fashion show but another person. The video-sharing application Tik Tok was fined three million rubles, around 48,000 euros, last month for promoting “gay-themed videos”. And the Russian media guarantor has asked the publishing groups to withdraw all books containing “LGBT propaganda” from sale.

The specter of Stalin

“The fear is that the next step is the criminalization of homosexuality, as in Stalin’s times,” says Gafurova. At the moment the sanctions are only administrative, even if increasingly harsher. During the discussion of the new law, two deputies from the Communist Party – which in theory is in opposition but in practice always votes together with Putin’s party – had asked that “propaganda of non-traditional sexual relations” became a real crime, governed by the penal code and punished with several years in prison. The proposal did not pass. The condemnation to silence remains.

“There is nothing wrong with who we simply are,” explains Dilya Gafurova. “And yet they gagged us”.

In Russia it is now forbidden even to talk about homosexuality: “Putin is demonizing us”