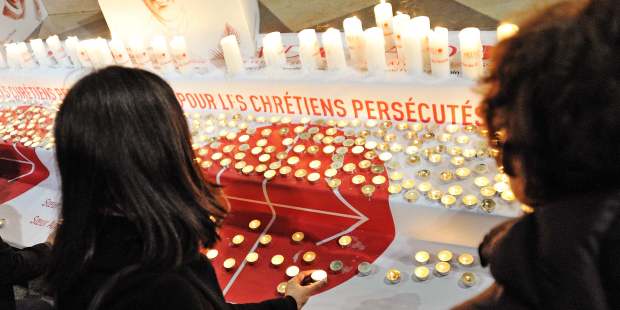 Aid to the Church in Need (ACN) is organizing its fourteenth Night of Witnesses from January 21 to 27, 2023. Five prayer vigils are planned in five cities in France, to pay tribute to the martyrs for their faith. Among the exceptional witnesses invited, Father David Michael de Penha, originally from Burma where the persecutions against Catholics are raging.

“My name is David Michael from Penha. But having a Christian name is a real problem in Burma”. Father Penha, Maung Maung Htun in Burmese, is 48 years old. Ordained in 2004 within the Salesian community of Don Bosco after training in theology and philosophy, he spent his first years of priesthood in Shillong, in the northeast of India. He then spent most of his priesthood in Burma, where he became a direct witness to the ordeal endured by Christians. Arrived in the United States on December 8, 2013, he is in charge of three parishes, all located in the state of Kansas (Midwest): Saint-Jean in the city of Iola, Saint-Joseph in the city of Yates Center, and Saint-Martin in the town of Piqua. He is also the communications director for the non-profit organization Burmese American Catholics for Peace and Justice, which provides financial assistance to the Catholic Church. in Burma. Burma, a military dictatorship where Christians are undesirables, is rocked by an endless civil war provoked by the military junta’s coup on February 1, 2021. In addition to burning villages, churches are regularly desecrated and destroyed, the priests arrested, and the Christians sometimes savagely murdered. Several abuses have been recorded against this minority already victim of discrimination even before the coup.

Father Penha will bear witness to the situation of Burmese Christians during the Night of Witnesses, organized by Aid to the Church in Need from January 21 to 27, 2023. This major spiritual event will honour, alongside Burma, two other countries: Chad and Haiti. Five vigils are planned in five different cities (Saint-Germain en Laye, Lille, Lyon, Paris and Nice). A great moment of spiritual communion during which Christians are invited to pray, sing and meditate on the fruits of martyrdom thanks to the testimonies, full of hope, of those who have seen and experienced suffering. This year, twelve priests and three nuns lost their lives to defend the message of Christ. A concrete way to remember Christians persecuted for their faith, which continues to gather thousands of faithful every year.

Aleteia: How does violence against Christians manifest itself in Burma? Father David Michael de Penha : Persecution does not always take the form of physical violence. Initially, it is a policy of discrimination against Christians and all other religious minorities which has been applied since 1962. This date marks the coming to power of General Ne Win and the nationalization of Catholic schools. For example, when the famous film The ten Commandments was screened and the movie theaters were packed, the socialist government realized the influence that the Christian religion could exert on the population. He therefore banned Christian films in cinemas. On the other hand, the State prevents by totally unjust laws the acquisition of land or the construction of churches for Christians. Parishes do not have bank accounts, so land, churches or parsonages are registered as private possessions.

Churches are bombed. Children have died seeking refuge in a church after their village was bombed. Villages with a Catholic majority are burned.

Do Christians also experience this discrimination in their personal lives?

Yes, Christians are not considered normal citizens. For example, in the army, if your personal file attests that you are Christian, you will never manage to exceed the glass ceiling put in place by the power which will block any possibility for your career to progress. Even before the 2021 coup, the government was inflicting different treatment on ethnic and religious minorities. For example, when he set up development aid plans, Christians found themselves without help for the education of children, or even to have access to care and health, to obtain suitable means of transport… All of these injustices have a considerable effect on people’s daily lives. Today, since the junta’s coup, the whole country is affected: as soon as one is considered an enemy, one is stigmatized.

Is the junta behind the 2021 coup specifically targeting Christians?
Today, Christians are directly attacked by the military. Certain dioceses are particularly targeted, such as the diocese of Loikaw, the archdiocese of Mandalay and the dioceses of Kalay and Harkha, located in the north of the country. Churches are bombed. Children have died seeking refuge in a church after their village was bombed. Villages with a Catholic majority are burned. The soldiers of the junta accumulate war crimes, including a particularly terrible one which consists in burning alive children, women and men. I learned one day that the brother of a friend of mine had been burned to death in his car. He had married only a month before this tragedy. My grandparents’ villages were also attacked, and many people I know lost everything they owned, starting with their homes. My own mother shelters in her house three families including five children.

Our priests manage to help people somehow, sometimes at the risk of their lives. Many give the sacraments to the People’s Defense Forces.

Do the dioceses manage to mobilize to help the people affected by these tragedies?
Yes, especially the Archdiocese of Mandalay which provides considerable help to families in distress. Some of its parishes take care of entire families to house them and provide them with a minimum of comfort. Nearly 500 people are displaced from their homes. They have been living in tents for months, and manage to feed themselves with two meals a day thanks to the volunteers of the diocese. Our priests manage to help people somehow, sometimes at the risk of their lives. Many give the sacraments to the People’s Defense Forces (self-defense groups against the Burmese junta, editor’s note). Church leaders, on the other hand, try not to take sides. They are afraid of aggravating the enmity with the army.

Are Christians Losing Hope? Do they manage to keep the faith despite the suffering endured?
Christians, especially Catholics, feel abandoned by the clergy at the head of the Burmese Church. But they do not feel abandoned by God. I have not yet known of anyone who has lost hope to the point of denying their faith. Despite everything, it is obvious that the cries of the Christian people of Burma are not heard enough. Neither from the media, nor from the world, nor from the Catholic Church. However, it is the whole Church that should realize what is happening at the moment to the Church of Burma, which is one of the most suffering and forgotten in the world. Since I have been living in the United States, things are gradually changing. I see that people organize events to talk about this conflict and the persecutions suffered, or even fundraisers. I am amazed at this generosity, which helps us to fight. Testifying through Aid to the Church in Need is also an extraordinary way to make our voices heard, and to cry out not to forget us.