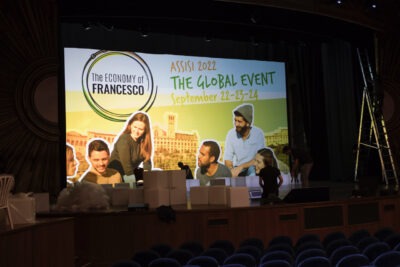 The city is ready to welcome the thousand young economists, entrepreneurs and change-maker who will be in Assisi from 22 to 24 September to celebrate their shared commitment to change the economy which will culminate on Saturday September 24thin the signing of a pact with Pope Francis.

There three days of EoF will develop between lyrick theatre and the Shovel events in Santa Maria degli Angeli and the historic center of Assisiin 12 villages, relating to the topics on which young people have worked in these three years. “Finally here we are: thank you and welcome young people to The Economy of Francesco – say the members of the organizing committee – . We are sure that, here in Assisi, you will be able to feel the Franciscan spirituality and allow us to know and appreciate the fruits of your work which will form the foundations of this new economy that the Holy Father has called us to build”.

The arrival of the first young people

Rich the program of the initiatives for The Economy of Francis which finally takes place in presence.

The September 22, at 9.30 at the Lyrick L’opening of the event and the EoF harvest: young people meet with sessions, discussions and roundtables to present ideas and projects, address economic issues and contemporary challenges. Followed by “The only just war is the one we don’t fight”, a reflection on the prevention of armed conflicts. From 11.30 at the Pala eventi: EoF Hogar, a space for meeting and dialogue, in the afternoon at 5 pm the plenary session with the EoF ambassadors with Vandana Shiva, Jeffrey Sachs, Kate Raworth, Gael Giraud, Sabina Alkire, Sister Helen Alford, Vilson Groh, Stefano Zamagni and Leonardo Becchetti.

Following the staging of show by the young people of the Seraphic Institute of Assisi The dream.

Friday 23rd at 9 o’clock Face to face with Francis – Paths in the footsteps of St. Francis (visits to places related to the life of the Saint), followed by 11 the young participants will meet in the various villages. At 6 pm, conferences open to all are scheduled, with young economists and entrepreneurs in dialogue with international speakers on the main topics of the event.

At the Pro Civitate Christiana the Economist Gael Giraud will speak on the theme “The Economy of Francesco: a new economy built by young people”, at the Sacro Convento Francesco Sylos Labini on “Meritocracy, evaluation, excellence: the case of universities and research”, at Monte Frumentario Vandana Shiva will speak on “Economics of Care, Gift Economy. Reflections on St. Francis: ‘It is only by giving that we receive’”, in the Sala della Conciliazione Vilson Groh will address the theme “Paths for a new educational and economic pact: building bridges between the center and the periphery”. And again at the Seraphic Institute, Sister Helen Alford will discuss the theme “Universal Fraternity: an idea that could change the world”, in the Basilica of Santa Maria degli Angeli the economist Stefano Zamagni will speak on the theme “The already evident dangers of of society. What is the contrast strategy?”. In the evening at 21 guided visits to the Basilica of San Francesco and the Basilica of Santa Maria degli Angeli.

The three days ends on Saturday September 24thwith the meeting of the participants with the Pope at the Lyrick Theatre where is it the Pact with young people will be signed. The meeting will be in live on Rai Uno, streamed on the EoF YouTube channel and on VaticanNews in seven languages, plus sign language. Also streaming on the same platforms on the 22nd.

Villages in the Franciscan places, one also in the protomonastery of Santa Chiara

As said, they are 12 villages of The Economy of Francesco, between the historic center and Santa Maria degli Angeli. Particular places will also open their doors to the public, such as the Protomonastery of Santa Chiara which will host the Economy is a Woman village, and Monte Frumentario with Agriculture and Justice and Finance and Humanity. Life and lifestyles and Work and care will be hosted at the Papal Basilica and Sacred Convent of San Francesco, Vocation and Profit at the Sanctuary of Stripping, Management and gift at the Basilica Santa Maria degli Angeli, Policies for happiness at the Episcopal Archive of San Rufino , Business and Peace at the Pro Civitate Christiana, Energy and poverty at the Palazzo del Comune, Companies in transition at the Santa Maria degli Angeli Pastoral Center and CO2 of inequality at the Seraphic Institute.