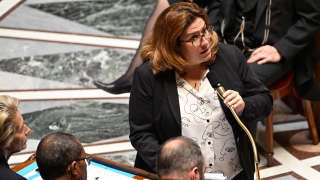 (Secretary of State Sonia Backès at the National Assembly on October 25, 2022)

SECTE – From a simple personality test to a sectarian regimentation of several decades. Responsible in particular for subjects such as fight against sectarian aberrationsthe Secretary of State for Citizenship, Sonia Backès, was invited to BFM TV Wednesday evening, November 2, and she returned to her personal experience to tell how her own mother became a Scientologist.

On the set of “22H Max”, opposite Maxime Switek, the Secretary of State explains that it all started while her parents were in the process of divorce. In the street, someone offers his mother to take a personality test. as found in women’s magazines “, she specifies. A simple way to analyze flaws find the weak point of potential targets. ” There is a common point to all sectarian excesses : it is to play on the vulnerability », explains Sonia Backès.

Here, the context of the divorce played an important role, we understand. After analysis of the personality test, Sonia Backès’ mother was offered training to compensate for its alleged flaws ». Thus begins the process of sectarian recruitment.

” We get in that way, it obviously starts to pay off, and then little by little it generates an extremely strong confinement “, analyzes the Secretary of State who evokes a ” particular vocabulary » used to create a « comfort zone inside this space and a discomfort zone outside”.

At that time, Sonia Backès was nine years old and naturally followed her mother, who had become director of the school of Scientology, since closed by the state. After two years of schooling, she passed her lie detector exams. ” I saw the process of entry, the process of influence and then at the exit I was helped by a comrade who saw the logo (of the Church of Scientology, editor’s note) on an envelope and who told me “Be careful, it’s a sect”. Not for a minute had I imagined that “.

The trigger for a process of questioning that will culminate shortly before her thirteenth birthday when she decides to ” throw everything away “. His mother, on the other hand, remained a Scientologist until her death a few months ago.

Miviludes warns of the increase in sectarian aberrations

Sonia Backès, by telling her personal story, hopes to raise public awareness of sectarian aberrations. This, while, two years after the start of the health crisis, these are the subject of one “significant increase” referralsaccording to the Interministerial Mission responsible for combating these phenomena (Miviludes).

The latter received 4,020 referrals in 2021, an increase of 33.6% compared to the previous year and nearly 50% compared to 2015, according to this organization which published its annual report on Wednesday.

Next to “multinationals of spirituality”such as the Church of Scientology, Anthroposophy or Jehovah’s Witnesses, also thrive on “gurus 2.0”who are at the head of groups “Mobile, changing and impalpable”characteristics of a sectarian phenomenon “in gaseous state”according to her.

“The excesses related to health are among the most worrying”, told AFP Sonia Backès. In 2021, 744 referrals concerned this subject. Thus, “Assizes of sectarian aberrations and conspiracy” will be organized “early 2023” to bring together the players in the fight against these phenomena and come up with a roadmap for the years to come.

See also on The HuffPost:

“I saw the process of influence”: This secretary of state recounts her childhood with her Scientologist mother