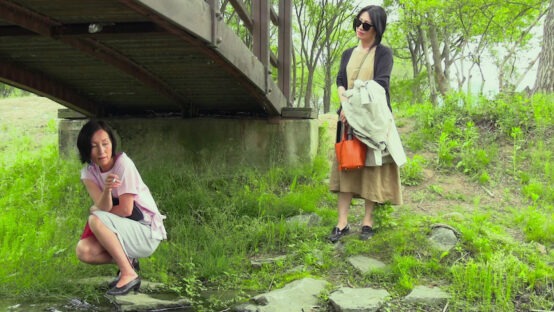 A new film by Hong Sang-soo will hit screens this Wednesday, September 21.

Something particularly striking stands out. themes of illness and death. And this, even if they were already present in what we consider to be the best works of the filmmaker since this great success that was Alone on the beach at night (2017): death for Hotel By The River (2018), the disease for Introduction (2021).

The protagonist, San-gok, is a former film actress living in the United States and who is passing through the capital of her native South Korea, to meet a director who would like to (re)shoot her. She temporarily stays with her sister Jeon-gok.
By small touches, implicitly, Hong Sang-soo puts us on the track of what this woman ofa certain age – Lee Hye-young, the actress who plays him, was born in 1962 – hides from those closest to him and will reveal to the filmmaker to justify his refusal of the proposal made by him. She is ill and, according to her doctors, would only have a few months to live.

A few gestures immediately put the chip in the ear or confirm what is heard. They turn out to be significant, a posteriori or not… San-gok’s light massage of one of his probably numb legs, the pressing of a hand on his stomach as if to calm a pain. There are also past events and a recent way of life, which she talks about and which could be linked to a psychological or physical ill-being, as cause or consequence: a renunciation or an impossibility to pursue her career as an actress, a alcohol addiction, a modest and solitary existence in the United States…

There is also this internal voice of San-gok which is heard – episodically, but from the start of the story – and which expresses a feeling, a desire, which consists of an imploration. The internal voice does not always accompany a plan showing the former actress, it is sometimes as if suspended. These are moments when the protagonist evokes, among other things, the importance of the present and the immediate enjoyment of moment lived – the famous seize the day, to quote the Horacian formula -, a form of positive, saving rejection of the past and the future. Contemplating a beautiful landscape, flowers in a park, provokes this joy, this deep well-being. Enjoy a good coffee, smoke a cigarette too…
Let’s talk about a attempt of rejection of the past and the future, because still shines through – and the viewer feels here all the richness and subtlety of the acting of the real actress Lee Hye-young, who, by the way, appears for the first time in a film of Hong Sang-soo – a concern of San-gok with regard to what is likely to happen, and a desire, difficult to dismiss, to remember what she has experienced, to find places of the past.
While waiting for her appointment with the director and after having discussed for a long time with her sister in a café, then having met her son, the former actress visits the garden and the house of her childhood. There she meets a little girl. The dialogue between the two characters and the way the child is filmed suggest that it is an image of herself that the adult San-gok has before – under – her eyes. A moment when the concrete present is mixed with another level of temporality and reality. San-gok takes the child in his arms for a few moments. An affectionate gesture that resembles the embrace with his nephew, shortly before. And which recalls the three amorous or friendly embraces, obviously invigorating, which each concluded the three parts ofIntroduction.
But San-gok then speaks of “heavy memories”, therefore painful, and regrets having come – which reinforces the idea of ​​his will to live fully. in the present.

This somewhat suspended voice that we are talking about sometimes really has the dimension of a plea, or of a response to what is considered to be obtaining a favor. At one point, San-gok thanks his imaginary interlocutor for – kindly – ​​“granting” him “peace” and – kindly – ​​“avoiding” him suffering. There is something here that refers to an immanent spirituality. The protagonist names no one, no transcendent being. At one point, we even wondered if she was talking to her nephew from a distance, who gave her a present – ​​a purse and some money – and whom she may consider a benefactor.
The very enigmatic words of the acupuncturist at the beginning ofIntroductionwhen he insistently asked a concretely non-existent interlocutor to give him a “second chance”… perhaps with his new companion – his medical secretary – who is not the mother of his young son Young-ho. 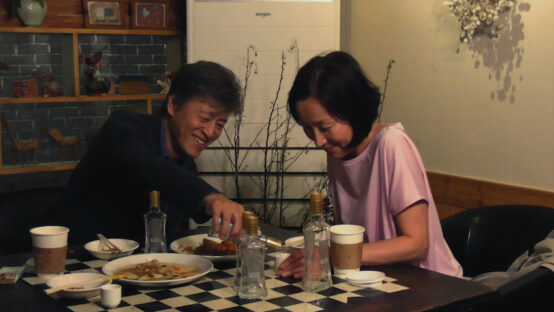 During the discussion between San-gok and the director Jae-won, reflexive winks are made: he tells him of his admiration for the charisma of this actress who had marked her in the early 90s – we have not had the opportunity to check, but it could be that there are mentioned films in which the real actress Lee Hye-young acted; San-gok, for her part, explains that she has looked at the works he has produced and which seem to her more like “short stories” than “novels” – this is obviously a reference to thewriting and some formal choices by Hong Sang-soo.
San-gok therefore evokes her illness, but also the way she lives from day to day, how she overcomes the apprehension linked to her impending death. She exposes her personal philosophy which can bring to mind both thelove fati Nietzschean and Epicurean wisdom. Jae-won says he admires the “strength” (and the “humanity”) of his interlocutor. It’s interesting and amusing to note that he doesn’t have the same reactions as her at all: he looks devastated, almost in tears, talks about “life female dog”. It is she who, paradoxically, tries to comfort him, to reassure him: by stroking his hair, for example. She says, “I believe that heaven is somewhere in front of our faces.” The French title of the work presented in this article is quite explicit: one must not look elsewhere, imagine finding happiness and beauty in another world (a hinterland ?). It is enough to open your eyes and to understand, to admit that all this is in front of you, very close and in face, within sight and touch. But the original title means In front of your face. The term “face” is essential, and is a leitmotif. Director Jae-won talks about the actress’s memorable and touching “face” in the films she starred in and remembers. She, for her part, explains that she wanted to commit suicide during her adolescence and gave up when she realized that the “world” was “beautiful”, that the “faces” of people were “splendid”. She recounts having seen the “face black with filth” of a worker and having wanted to “lick it” so much she found it “sparkling with beauty”. As soon as we understood that this word was going to be repeated, we thought of Emmanuel Levinas… and it happens that after a while, San-gok pronounces the term “epiphany” – in any case it is him which appears in the French subtitles… An interesting observation even if the philosophy and ethics deeply developed by the author of Totality and infinity cannot frankly be compared with the few concise formulas launched by the protagonist.

right before your eyes is aesthetically beautiful, intellectually pleasing. But the turn of events gives it a bitter and ironic dimension. We feel a hope in the actress San-gok when the filmmaker Jae-won proposes to her to shoot, no longer a feature film, but a short film – like a portrait painted quickly -, and agrees to do the love with her, confirms his desire to do so. It’s obviously a satisfaction for San-gok who feels he is aging, who talks about his wrinkles. A great satisfaction for her to always feel photogenic, desirable. The pink sweater that this woman wears during the day that Hong Sang-soo recounts symbolizes this desire for youth and fulfilment, this project of (re)birth; a naive purity, a burst of love and altruism.
But Jae-won exhibits the symptoms of cowardice, culpable inconsistency, lying. He does not keep his promises. We imagine – without, however, having proof of it – that the owner of the bar where he finds the actress, whom he says is a friend and is absent, is in fact his wife.

When San-gok learns of Jae-won’s relentless defection, it’s as if grim reality hits him in the face. She is also wearing a red bodice at this time and no longer pink… a color that echoes her evil and her disastrous destiny.
As at other times in the film, San-gok laughs. But this laughter here is ambiguous. Obviously, strongly, nervousness, which could be a terrible realization, and despair show through. This laugh pushes the heroine, who turns and hides in the hollow of the sofa on which she is lying, on the verge of tears as on the edge of an abyss.
This whole day narrated by Hong Sang-soo could be a dream, an illusory hope of San-gok. A novel she got told – the diegetic name of the bar where she meets Jae-won is called Novel. The viewer who knows Hong Sang-soo knows the importance of seemingly dreamlike moments in many of his films, and the doubt that the director likes to leave in the mind of the viewer as to what is real – at the level of the characters – and what comes from their dreamlike projection… Think of the awakening after falling asleep of the film actress Yeong-hee in Alone on the beach at nightto that of Young-ho, aboard a car, in Introduction… The waking scenes obviously suggest that certain other scenes, sometimes immediately preceding, have or could have a dreamlike dimension. Or even color the entire film concerned with this dimension.
At the start of the story of right before your eyes, in the morning, on waking, Jeon-gok, San-gok’s sister, tells her that she had a dream which is like a happy omen, but that, by superstition, she will only be able to tell him about it. in the afternoon. We won’t see her tell him. In this afternoon, the actress is with the director. The next morning, after hearing the bad news while lying on her sofa, she stays by her sleeping sister’s bed in her bed and asks her, “Are you having a dream? “. We perceive Jeon-gok as we perceived the little girl we talked about above. As a symbolic image representing San-gok herself. San-gok facing herself, presents under his own eyes.

© All rights reserved. Culturopoing.com is an entirely voluntary site (Association of law 1901) and respects the copyrights, in the respect of the work of the artists whom we seek to develop. The photos visible on the site are for illustrative purposes only, not for the purpose of commercial exploitation and are not the property of Culturopoing. However, if a photograph had nevertheless escaped our control, it will be removed immediately. We count on the kindness and vigilance of each reader – anonymous, distributor, press officer, artist, photographer.
Please contact Bruno Piszczorowicz (lebornu@hotmail.com) or Olivier Rossignot (culturopoingcinema@gmail.com).

Hong Sang-soo – “Right Before Your Eyes”