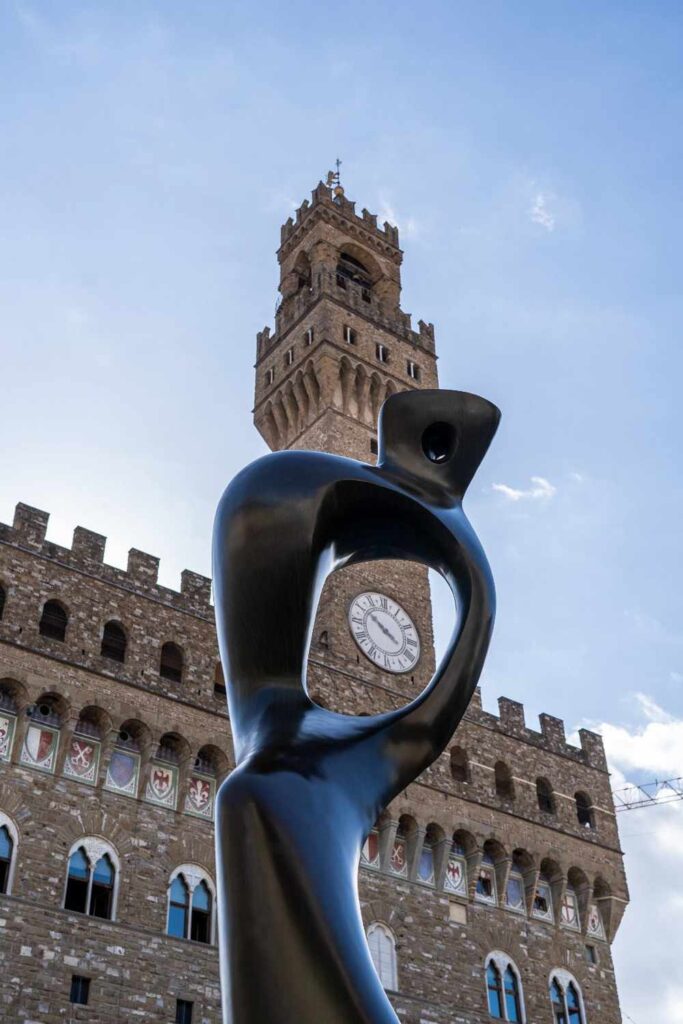 FLORENCE – The city of Florence pays tribute to Henry Mooreon the occasion of the Florence Art Weekthanks to two new projects exhibition.

The first is Henry Moore in Florenceedited by Sebastiano BarassiHead of Collections and Programs of the Henry Moore Foundation and da Sergio RisalitiDirector of the Museo Novecento, which presents two monumental works, traced within the great sculptural production of Henry Moore (Castleford, 1898 – Perry Green 1986).

Until March 31, 2023 the two sculptures Large Interior Form And Family Group will be exhibited respectively in two symbolic places of the city: Piazza della Signoria and exceptionally on the Churchyard of the Abbey of San Miniato al Monte, in dialogue with the historical-artistic heritage of Florence. The exhibition joins those already held in previous years which saw contemporary art dialogue with the great monuments of Piazza della Signoria, such as those of Jan Fabre and Jeff Koons, Urs Fisher and Francesco Vezzoli.

The exhibition also sanctions a renewed collaboration with the BIAF – International Biennial of Antiques in Florence.

“After the great exhibition dedicated to Henry Moore from the Museo Novecento in 2021, we continue in the celebration of one of the greatest artists of the twentieth century, protagonist of an unforgettable exhibition at Forte Belvedere 50 years ago “ – he claims Sergio Risaliti, Director of the Museo Novecento. – “Piazza della Signoria welcomes Large Interior Form, a bronze sculpture of abstract shapes which however triggers a very sophisticated dialogue with the great monuments of the square, in particular with Giambologna’s Rape of the Sabines. It is also a historical fact that Moore’s main link with Michelangelo and with those serpentine forms that were a sign of recognition of his most winged inventions. Exceptionally, then, the group dedicated to the family, Family Group, was placed in the churchyard of San Miniato al Monte, one of the themes most dear to the English sculptor. And from this parvis resounds a very human universal message that is charged with a spiritual tension leaning against the pure forms of one of the most beautiful churches in the world. I thank Father Bernardo, Abbot of the Abbey of San Miniato for this precious welcome ”.

“Fifty years after the great retrospective that the city dedicated to the great English artist at the Forte di Belvedere, Moore continues to surprise us and we continue to pay homage to him and find new ideas to continue to show his works “ – declares Dario Nardella, Mayor of Florence. – “After that epochal appointment, Moore returned to the city several times with various and beloved works, the last with the exhibition of his Warrior with Shield at Palazzo Vecchio. Now we will meet him in various parts of the city, starting from his civic and symbolic heart which is Piazza della Signoria, up to one of the most representative places of spirituality such as the Basilica of San Miniato al Monte. An exhibition that therefore continues that search for experimentation, a conjunction between ancient and contemporary, inserted in a story of a living and pulsating city, obviously starting from its immense secular heritage, and which will make us rediscover a bond with the sculptor who never died.“.

Back to Moore. Fort Belvedere 1972

Back to Moore. Fort Belvedere 1972 is the project that allows you to relive in Florence, within the Sala d’Arme of Palazzo Vecchio, from 22 September to 3 October 2022, the exhibition that Henry Moore presented at Forte Belvedere in 1972.

There were many at the time to crowd the stands of the Forte di Belvedere and the halls of the Palazzina during the summer months, braving the sun. Over 345 thousand people. There was Princess Margaret of England, accompanied by her husband, Lord Snowdon, there were Giovanni Leone, sixth President of the Italian Republic, Edward Heath, then British Prime Minister, and of course the artist, Henry Moore, who had followed person the preparation of his monumental sculptures on the terraces overlooking Florence. Today, fifty years after that historic event, the collected images (over 100) are on display in the Sala d’Arme of Palazzo Vecchio, thanks to the project conceived by Sergio Risaliti, made by flipping a contest in local newspapers and continued on social channels.

“The Back to Moore. Forte Belvedere 1972, in the Sala D’Arme of Palazzo Vecchio exhibits private, and therefore unpublished, shots of those who went to Forte Belvedere to see those contemporary and at the same time timeless sculptures up close, in perfect harmony with the surrounding landscape“- explains Sergio Risaliti, Director of the Museo Novecento. – “Whole families and young newly married couples who preferred the Fort for the photo shoot instead of Piazzale Michelangelo due to the presence of Moore’s works. Adults and children playing with the fluid forms of the English sculptor’s works, with their full and empty spaces, young students gathered to study and draw at the foot of the sculptures. The stories received are many, from those who casually reading in the newspaper of the exhibition took the first train to Florence to those who had organized the visit for some time with friends. The exhibition has remained a historic event for the city of Florence, marking the beginning of the exhibitions of contemporary artists at the Forte Belvedere and leaving a mark on those who have visited it, so much so that, after fifty years, people still manage to remember their visit or go back to the slides and negatives of the photos taken among the artist’s works “.

As in a film, it will be possible to retrace the habits and customs of an era, through the behaviors, attitudes, fashion and above all the special relationship established with the sculptures that dominated the ramparts of Forte Belvedere, mirror of an Italy of beauty hopes and good manners.