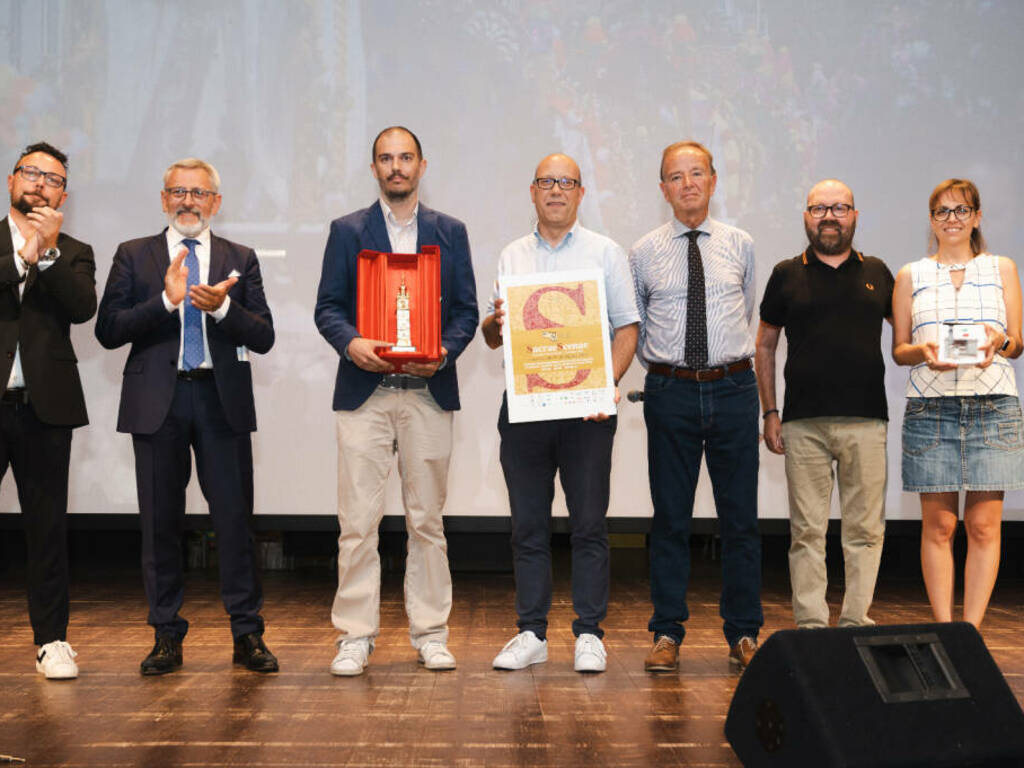 Ardesio. From Israel, Caserta Vecchia, Milan, Macerata Campania and Gubbio to Ardesio: directors and guests of the third edition of the international film festival “Sacrae Scenae – Ardesio Film Festival” held over the weekend in Ardesio (from 26 to 28 August), they arrived in the upper Val Seriana to attend the festival and the awards ceremony. An edition that will certainly be remembered precisely for the international presence of nominations, over 70 from 30 countries, and above all the first, finally, with all the award-winning directors present at Ardesio. The day started with the inauguration of the film library in the MEtA Museum in Ardesio with the cutting of the ribbon and the presentation of the spaces where all the films in competition can be consulted, and continued in the afternoon with the latest screenings and awards. .

Assigned by the Festival Jury (chaired by Nicola Bionda, with Piero Carlesi and Pino Spagnulo) the Golden Bell Tower to the overall winner “Il Profumo dei Fiori di Carta ”by Emilio Corbari, which also obtained the prize of the Popular Jury (chaired by Umberto Zanoletti).

The prize, the Golden and Silver Bell Tower depicts the bell tower of Sanctuary of the Madonna delle Grazie of Ardesio, a place that, linked to the devotion to the Blessed Virgin, inspired the birth of the festival.

The festival is organized by Vivi Ardesio with the artistic direction of the Cinema and Art Association and with the promoters of the Municipality of Ardesio and Pro Loco Ardesio and in collaboration with the Parish.

see all the photos

The Scent of Paper Flowers by Emilio Corbari | Italy-Canada | 80 ‘

Motivation Jury of the Festival: The excellent documentary manages to create a delicate bridge between two communities living on the opposite sides of the ocean. The preparations for the Feast of San Pardo are the pretext for a careful comparison between different realities and generations. Rural and urbanized life meet in an attempt to survive a tradition that is increasingly in danger of disappearing.

Motivation Popular Jury: For having transmitted the religious and cultural significance of a popular tradition that preserves and revives, in its ritual, spiritual ties beyond geographical and generational borders. The religious theme, in the cyclical celebration of the feast, is manifested in the meticulous and devoted preparation of those paper flowers that smell of the sacred. And in all participants, on both sides of the ocean, the common sense of belonging remains strong and the profound flavor of life is renewed.

“We are very happy with this double recognition – said the director Emilio Corbari – A three-year long work. In the film we tell of the tradition of the town of Larino, handed down overseas in Canada to Montréal by the Larinese community that emigrated here. A tradition of popular devotion which is increasingly difficult to maintain but which the community carries on. In the docu film it emerges that this is a strong identity choice ”.

The documentary is the representation of a secular rite that is renewed from year to year in Macerata and still manages to involve several generations. The absolute protagonist is the music of the ‘Bottari’, capable of acting at the same time as an instrument of spiritual liberation, an instrument of collective participation and a means to testify one’s own tradition and identity.

“This docu-film was born from a long passion for the stomach, traditions, heart and experience of Italians – said the director Luigi Ferraiuolo satisfied with the recognition obtained, remembering that the film is produced with TV2000 – I lived a year in Macerata Campania to tell this tradition. The rhythm of Sant’Antuono, according to ethnomusicologists the oldest in Europe, invites you, involves you, and from there was born the idea of ​​telling this tradition with a musical docu film “

Avatara, (from Sanskrit, “descent”) in numerous Hindu theologies, is the moment of the apparition or descent on earth of the divinity. The beautiful documentary takes us to explore, in a careful and conscious way, the relationship between life and religion in a remote valley of the Hindu Himalayas.

From Israel to Ardesio to receive the award “A film born while we were in the Himalayas for another project and we met this community and decided to tell the cult of the Goddess in a remote valley in a film-explain director Nadav Harel and co-director Arik Moran – We were guests in Ardesio for a few days, we visited the town and also knew the devotion to the Madonna delle Grazie of Ardesio who appeared here to two children. A similarity with what we tell in the film where we talk about Avatara, and the apparition of divinity to young women ”.

During the evening, led by the artistic director Roberto Gualdi, the directors were awarded by the organizers Simone Bonetti president of Vivi Ardesio with Fabrizio Zucchelli creator and president of the Festival and by the promoters the mayor Yvan Caccia for the Municipality and Paola Zucchelli for the Pro Loco, as well as organizations, supporters and partners and jurors, Piero Carlesi for the Festival Jury and Lorenzo Fornoni for the Popular Jury. Among the guests also the councilor of Gubbio Marco Morelli, Alberto Conforti son of Lorenzo Conforti, Domenico Salzillo, vice president of the Sant’Antuono & Le Battuglie Association of Pastellasca from Macerata Campania, whose tradition was told in one of the award-winning films.

“Thanks to Sacrae Scenae – he said Simone Bonetti, president of Vivi Ardesio and deputy mayor of Ardesio– we were able to welcome communities and host directors who from tomorrow will be able to say they know Ardesio, in Israel, in Macerata (Campania), Caserta Vecchia, in Gubbio, together with all the directors who have received the call in recent years. In addition to the Sanctuary, the events of the Pro Loco, the Orobie Ring and the many beauties of Ardesio, today, thanks to the opening of the film library, there is another reason to visit and discover Ardesio. Scholars, researchers or simple enthusiasts will be able to stay in Ardesio also for the Cineteca ”.

“We are satisfied – said the president of the Fabrizio Zucchelli Festival who, at the end of the awards ceremony, thanked all the directors present, the sponsors and the organizations that support the initiative and the staff of Vivi Ardesio.

“We grow in quantity and quality. Let’s put the arrow, and we really begin to tread an increasingly national scenario, waiting to land in Europe. – said Mayor Yvan Caccia – This is the legacy of the third edition of Sacrae Scenae. That a community of 3,000 souls could succeed was not at all obvious!

“A nice conclusion to the Festival this year thanks to the presence of all the directors who collected the awards on stage – commented the artistic director of the Roberto Gualdi Festival – appreciated the out-of-competition film “Still Life” by Uberto Pasolini, which continues the appointment with the great cinema films that began last year. “

To reward the overall winner, on stage, next to the promoters, for BCC Milano there was Duilio Baggi, former president of BCC Bergamo: “The past editions of the Festival saw the support of our historic Cooperative Credit Bank Bergamo and Valli, while today I am here to award the winner on behalf of BCC Milano, the result of the marriage with Bergamo in June last. – Duilio Baggi said on stage, also complimenting the very high quality of the films offered- Sacre Scenae is an event capable, through the language of cinema, to be increasingly protected and promoted, and it is what you are doing, therefore capable of highlighting to the universality of spiritual sentiment and to human and community values. A company that deserves to be supported and valued “.

Among the partners also present Ivana Church of Cà del Botto, whose products were donated to the guests of the evening, who praised the work of the organizers “The many invitations of these days to take the festival around Italy and beyond are a wonderful opportunity to talk about Ardesio in the world”. Agostino Piccinali of Scame SpA recalled their commitment to sustainability and to the territory by also supporting quality initiatives just like Sacrae Scenae.

On stage too Giovanni Malanchini, councilor secretary of the Bureau of the Regional Council: “It is an honor to be here to reward the winning directors of a unique event that speaks of sacredness in an increasingly secularized way – said Malanchini – With a look of hope towards the future it is important that our roots and our values ​​remain firm” .

To reward also the president of the Seriana Valley Mountain Community Giampiero Calegari, among the supporters of the event, who spoke about the importance of the festival for the territory and the organizational effort. On stage also the president of the Gal Valle Seriana and Bergamaschi Lakes Alex Borlini and the councilor of Gubbio Marco Morelli.