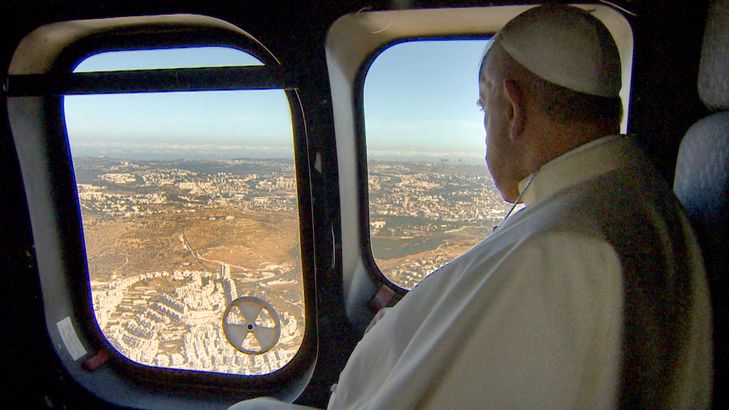 But what did Gianfranco Rosi do there? Award-winning director, Golden Lion at the Venice Film Festival in 2013, Golden Bear in Berlin three years later, author of documentaries all over the world, how did he end up signing In viaggio, this documentary which should be released in cinemas on December 14 and which is dedicated… to Pope Francis? Eighty minutes in the footsteps of the man in white traveling the world.

For this, it was necessary to go through an immersion in deep waters, through eight hundred hours of archive images provided by the Vatican. Almost ten years of travel, since the initiatory pilgrimage of the one who had then become Pope Francis, in 2013, on the island of Lampedusa, central point of the migrant crisis in Europe, where hours earlier, a boat from Africa, and to perish – again – those who hoped to find a better life in Europe.

Nothing obvious for this Italian-American documentary filmmaker born 59 years ago in Asmara, Eritrea, where his father – “who was not Catholic, whereas my mother was”, he says today – then works as a banker. Since then, he has lived in the United States, traveled around the world several times, having been educated in Lasallian schools by “wonderful masters” when he lived in Africa.

He always stayed “not Catholic, but not atheist”he insists. “My spirit is always guided by an inner spirituality”, he continues. Before showing without forcing a real admiration for the pope. “I am constantly looking for a guide. And maybe with this pope, I found a spiritual guide, in the strong sense of the term. »

To tell the truth, before 2016, Gianfranco Rosi did not really know François. It was on this date that he realized Fuocoammarea documentary of more than an hour on the drama of Lampedusa. “Our destinies have crossed”blows the director, lighting a first cigarette, which will be followed by many others during the interview.

For his documentary, Gianfranco Rosi drew on eight hundred hours of archive footage provided by the Vatican, retracing ten years of travels, including one in Cuba in 2015. / Meteor Films

This Sunday evening, he wrapped himself up in a black parka, hat on his shaved head and dark glasses. From Milan, he agreed to give this interview, between a trip to Amsterdam and another to Paris, and consented to turn on the camera of his computer. Moments. “Excuse me, I’m turning off Zoom, I hate it”begins the one who obviously prefers to be behind the camera.

A film “without theology or ideology

After Lampedusa, which was the first place of the “crossing” between the man of faith and the man of the cinema, a second intervened, a few years later, on the occasion of another documentary, Notturno. In this film, the director travels to the borders of Syria, Lebanon, Kurdistan and Iraq… A region to which François is also heading in the spring of 2020, when he makes his historic trip to Iraq.

For Gianfranco Rosi, who sees his documentaries as so many “inner journeys”, this journey of Francis in the biblical lands is the sign that we must take a close interest in this extraordinary traveler who is the pope. During his thirty-eight trips abroad undertaken since the beginning of his pontificate, Francis “never traveled to proselytize”describes Rosi, who claims to have wanted to make a film “without theology or ideology”.

Pope Francis upon his arrival in Lampedusa on July 8, 2013. / Alessandro Bianchi/Reuters

Nevertheless, In viaggio is filled with those silences observed by the pope when he prays or listens to those who speak to him. “He is a man who watches and listens. When he faces a crowd, he seems to be watching everyone present. And when he greets you, you have the impression that he only sees you. He has an enormous ability to be present. »

He himself took part in two trips, to Malta, in March 2022, and to Canada, in July of the same year. The director greets François on the plane, like all the journalists on board. However, it is not as a journalist, but as a filmmaker that he observes François’ wanderings around the world. Rosi sees a “Via Crucis” (a “stations of the cross”) traversed by Francis, at the peripheries of the world.

“I made a film without borders about a pope without borders, he continues. What strikes me is this Pope who speaks to everyone, in a universal way, from East to West, from North to South, to the rich and the poor. » But basically, what do all these trips really change? “It changes the lives of people who meet it, responds the filmmaker. Obviously, it does not stop wars and does not resolve crises. This is also why a form of loneliness emerges from him. Basically, I wanted to pay tribute to a man who is trying to change something. »

Gianfranco Rosi’s film offers the possibility of following Pope Francis on his journey for eighty minutes, from Lampedusa to Canada, passing in particular through Chile, Malta, Mexico, Israel and Palestine. Beyond the striking portrait, without commentary, of a globe-trotting pope, Rosi manages to trace a common thread through the peregrinations of a man in white going to meet the miseries of the world, determined to face the consequences of war, divisions and hatred. And trying to call the world to change course. Even if it means taking the risk of shouting in the desert.

Gianfranco Rosi, a director in the suitcases of Pope Francis

Jeff Bridges has returned recharged and is tougher than ever as "The Old Man"
Compostela: on the way to the essential
Laframboise trial: the ex
Tweet
Share
Share
Pin