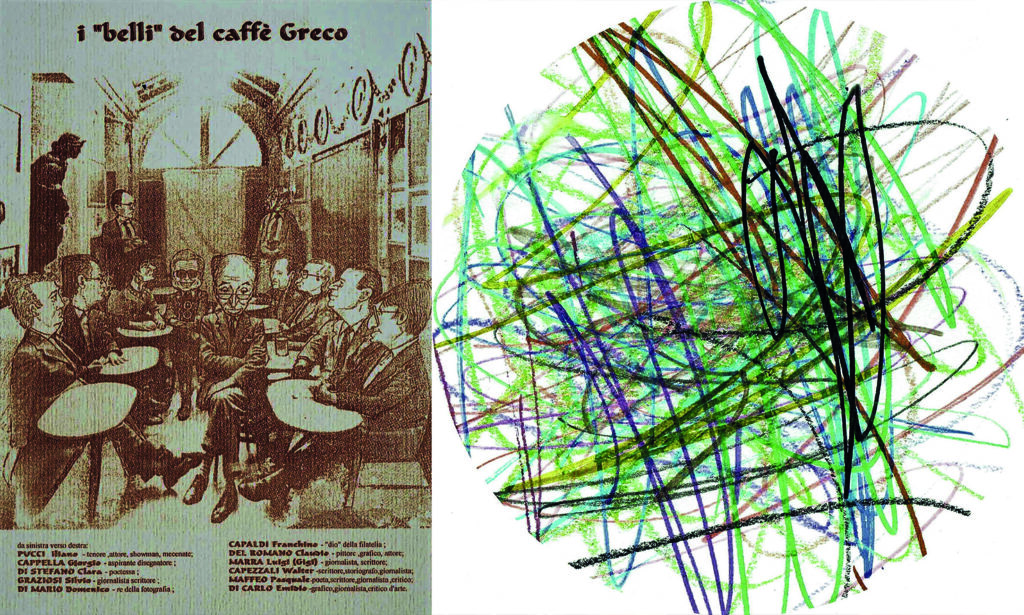 In the monumental complex of the former Bourbon Prison, in Avellino, under the patronage of the Municipality, an exhibition of contemporary art is presented, dedicated to Pier Paolo Pasolini, on the centenary of his birth (1922). As many as 27 sponsors underline the importance of the event, including “SpazioArte”, the Circolo Culturale Polivalente dell’Aquila.
Conceived by “Artestruttura” by Morgan Caneva of Udine, the exhibition (from 1 to 24 September 2022) includes 68 works, two for each artist, inspired by one of the most significant messages in Pasolini’s repertoire, the film “Uccellacci e uccellini”

To dad. To me he knows that life is nothing. Well. of course, death is great. When someone died, everything he had to do was done.
The dialogue between Ninetto Davoli and Totò can be found in Pasolini’s film from the 1960s: “Uccellacci e uccellini”. The film appeared on the screen in 1966, underlining that “Realism” that the Gallery “La Nuova Pesa”, in Via Frattina (1959) first and then in Via del Vantaggio (1961), brought together “those personalities and those artists who presented themselves as the freest and most renewing ones “.
In the limelight were the artists of the “New Figuration”, with: Ugo Attardi, Ennio Calabria, Alberto Gianquinto, Piero Guccione, Fernando Farulli, Piero Paolo Pasolini. In the new Movement there were also critics: Antonio Del Guercio, Dario Micacchi, Duilio Morosini; the latter founder of the group “The Pros and the Cons”. Giulio Carlo Argan was missing in the issue, but only for a conscious autonomy in the world of art.
At the time, there was a young fifteen year old from Abruzzo, eager to find out what was happening in the capital. He wrote about the local news in the newspapers of the time (those coming out in the morning or in the afternoon). His friend Pietro Scimia, in his flamboyant little shop under the Porticoes, sold him personalized “postcards”; with the proceeds you paid for the ticket on the “Pacilli” bus and off to Rome! Once in the capital he went around the art galleries. There were over three hundred of them. Therefore he saw as much as possible. “The new weigh” was always in the itinerary. It was also the same, arriving in “Piazza del Popolo”, the “Caffè Rosati”. In the room on the first floor, “four friends” met: famous in art, cinema and literature. With the excuse of a coffee, the young man from the province of L’Aquila was hoping for some meeting. He often waited in vain. Then from “Piazza del Popolo”, in “Via Condotti”, to peek at the “Greek Coffee”. Here there were “those” of the house: Ennio Flaiano, Nicola Ciarletta, Andrea Pazienza, … .. The “Caffè Greco” was frequented by a large number of famous people compared to the “Caffè Rosati”. Pier Paolo Pasolini went to one or the other. Also because he too had something to show himself as a painter. In the fifties and seventies he painted “portraits”, some of his closest friends: Ninetto Davoli, Maria Callas, Andrea Zanzotto, Roberto Longhi. Looking at the “faces” it was clear how constant was the commitment to a creativity that was the externalization of the human mood hidden in the individual protagonists. Look at the “Portrait of Roberto Longhi”, the splendid pastel-sanguine (1975) in which the ‘face’ of the art critic is a sort of linear-arrow shot towards the explored world of form. Giorgio Cappella, an unscrupulous ‘caricaturist’, used the “pen” for one of the meetings in the drawing room of the famous Roman “Caffè”. Obviously, he replaced the great protagonists with a strictly L’Aquila troupe, “The beauties of Greek coffee”.
In the front row: Ileano Pucci, Franco Capaldi and Emidio Di Carlo.

Let’s go back to the “centenary” year. The Galleria d’Arte Moderna in Rome will remember Pasolini in the exhibition where many paintings can be seen again. The inauguration on October 27, 2022; closing on April 16, 2023. The following are presented: over 170 rare, unseen portraits of Pasolini, including entire photographic services, hitherto unknown; everything that the Italian writer, poet, author and film and theater director can remember.
In the exhibitions that compete in wanting to celebrate Pasolini’s centenary, Friuli also plays its part. From May 27th to October 2nd 2022, he presents: “Under the eyes of the world; at the “De Claricini Dornpacher di Bottenicco Foundation”, in the province of Udine, 13 artists offer creativity on the “portrait” of the poet. Another appointment: from 24 September 2022 to 8 January 2023, at “Villa Manin di Passariano di Codroipo (Udine)”. The exhibition, curated by Silvia Martin Gutiérrez, is organized by the Regional Body for the Cultural Heritage of Friuli Venezia Giulia, with the contribution of “Cinemazero” and “Centro Studi Pier Paolo Pasolini of Casarsa della Delizia” (both from Pordenone). The exhibition starts from the place where Pasolini trained as a poet, Friuli; then it embraces the places in its unstoppable evolution, from “Friuli to the World”. In 170 unpublished and rare portraits, entire photographic services – hitherto unrecognized – come back to light, especially with the great foreign photographers (Richard Avedon, Herbert List, Henri Cartier-Bresson, Jerry Bauer, Jonas Mekas, Lütfi Özkök, Erika Rabau, Duane Michals , Philippe Koudjina, Marlik Shamir and many others); as well as on the places, moments and encounters that marked Pasolini’s life.
The exhibition in Avellino is a “tribute” from 34 contemporary artists, with two works each inspired by the recurring theme, largely, in the film “Uccellacci uccellini”. Numerous “portraits” concretize the spiritual dialogue of the past solicited in the present. Gianni Maglio, from Montefredane (AV), has separated the presence of the two birds: in one work the “little birds”, in the other the “little birds”. The bad and the good, the false and the real, the bad and the good. On display: the two aspects of that society of which Pasolini grasped, with civil commitment and a critical spirit, the “true”.
Cesare and Noah Serafino di Spilimbergo (PN) left the “portrait” behind. His “graphic-gestural” world reverberates the inner motivation of man: “The soul of Pier Paolo Pasolini”. In the two ‘pastels’, spirituality is in the dynamic concreteness of the sign that marks the multiplicity of lives lived by the artist, the poet, the writer, the intellectual and the Italian director.