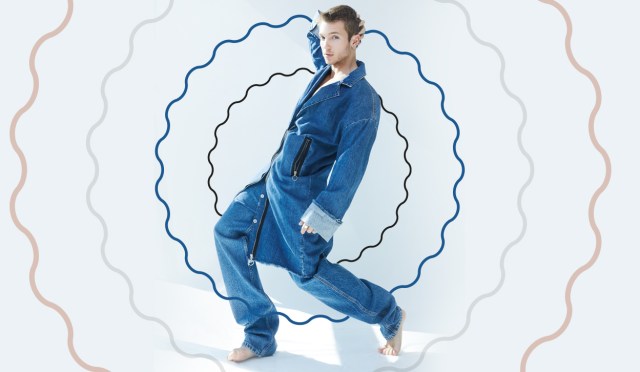 “I put slow motion to better understand what happens to me when I lose control. Playing to be someone else who hides my interior, it becomes difficult to distinguish who I am as well ”, Franco Masini sings in “Formas”, one of the tracks of his most recent album, titled Castawaywritten and recorded entirely during the pandemic.

And it is that he is always in permanent movement. His working life led him to tour various corners of the map and playing to get lost in a range of completely antagonistic characters throughout his career.

Today, with remarkable maturity, the actor and singer dominates the international film sets, He contributes with charm and fascination to the most popular music platforms and governs the Buenos Aires stages with masterful appeal.

This weekend he says goodbye to one of the most important musical blockbusters of recent times, Return in Patagoniawork that stars with Fer Dente Y Nahuel Pennisi with a theatrical contraption rarely seen in Argentina.

In the show, Franco embodies a peculiar character with a stellar, almost magical wisdom that invites reflection and connects us with what is truly important: the messages of the soul.

–When you got the proposal to star Return in Patagonia You were in Spain finishing recording a series. However, the dates moved and you were finally able to be there.

–Yes, at first it was a little difficult because they didn’t give me the times, but almost when the rehearsals were about to start, they called my team to let them know that it was postponed and that there was a new date.

I believe that things, when they have to happen, happen, and they accommodated themselves here for me to be. Thank goodness, because it’s incredible what happens every time we finish a show. We are very surprised at how moved people are.

–And what was it that captivated you about the work?

-There are several things. Being able to do this musical, which is one hundred percent Argentine, with a mega-production, because I really believe that I seldom saw something so big at a local theater show, with 300-meter screens, 32 artists on stage, an orchestra of more than twelve musicians… Everything that happens is very big, and the script has a fundamental message, which is very useful at this time of year.

The play talks about love, values, connecting with the little things in life, and I think people need to see that, they need to relax and connect with what’s happening on stage.

–The work is based on The return of the young princeby Alejandro Roemmers, which is a kind of sequel to The little Prince. What challenges did your character imply for you?

–Well, the whole work goes in one direction, and my character in another; it comes from another world, from another planet, so to speak, and that was the challenge I had when composing it.

Each experience leaves you something different, and this character helped me expand my spirituality, It made me connect with the mystical. I think it represents a bit of illusion, that simple thing that boys have, that they take everything they see as something new. In the work one travels with him.

Were you able to absorb any of that?

–Yes, obviously. There is a phrase that says: “To move forward you have to take risks” and it seems to me that this is always the case. When you are in a comfort zone, you are still, you are comfortable, you feel safe, and when you want to move forward, you have to take the risks that this implies. It happens to me when I’m in other countries, you have to adapt to that place, its people, its culture, that way of working, and that’s also part of growing up.

–One of the first themes that the work deals with has to do with the disconnection of human beings from each other, from the connection with the cell phone. Where do you find yourself with all that world?

–I think the challenge we all have is to put down the phone to focus on other things, like a chat, for example. The telephone distracts you, one has to be careful so that it does not become a whole, so as not to end up stuck there all day.

The play was an absolute success. Are you aware of what happens with ticket sales? Is it something that genuinely interests you or do you prefer to be on the sidelines?

–Yes, obviously, we are always aware of whether people join, what expectations the work generates or what happens once they see it, because it is good to build on what is happening. Even on stage, if you throw a joke that has a good impact because the audience laughs, that’s it, that’s it! The next function is repeated.

–Speaking a bit about your musical facet, during the pandemic you wrote several songs and put together an album. How was that process?

–We all experience the pandemic in a different way. In my case, I was about to go to Mexico to film the series Rebel, and when I left, we couldn’t even start shooting. I was there for a week, I came back and we locked ourselves up. That’s when I started writing the songs, recording them. The videos were also made at that time, and it was amazing because I was able to connect with it, I had the time to do it.

I need to be calm to make music, I can’t be doing a play or a series and at the same time writing, and the pandemic helped me with that. I spent all day writing my songs on a piece of paper; in fact, I had never written so many at once. Since then I have not released music again, and I hope to soon. I want to take the time to release the songs, to be able to play them and defend them.

Why did you title it? Castaway?

–It was how I felt inside the city in the pandemic, half adrift without knowing when it was all going to end. All the songs have to do with that feeling.

Now that the work is over, what are your next plans? Where are you going to keep turning?

–It happened to me that I was traveling around many countries in a very short time. After filming in Mexico, I came back, and right away I went to Spain to record All the times we fell in love, a series that will premiere early next year. Probably, for the premiere I will go to Madrid, I am very excited about that. I want to take advantage of everything that is happening to me internationally.

I love being in Argentina and I really enjoy doing things here, but I love that mix of coming, doing a play, spending four months and suddenly going to Europe for six months. Now I have some proposals to make movies and series. These issues are yet to be defined.

–In both places, so let’s see where I end up.