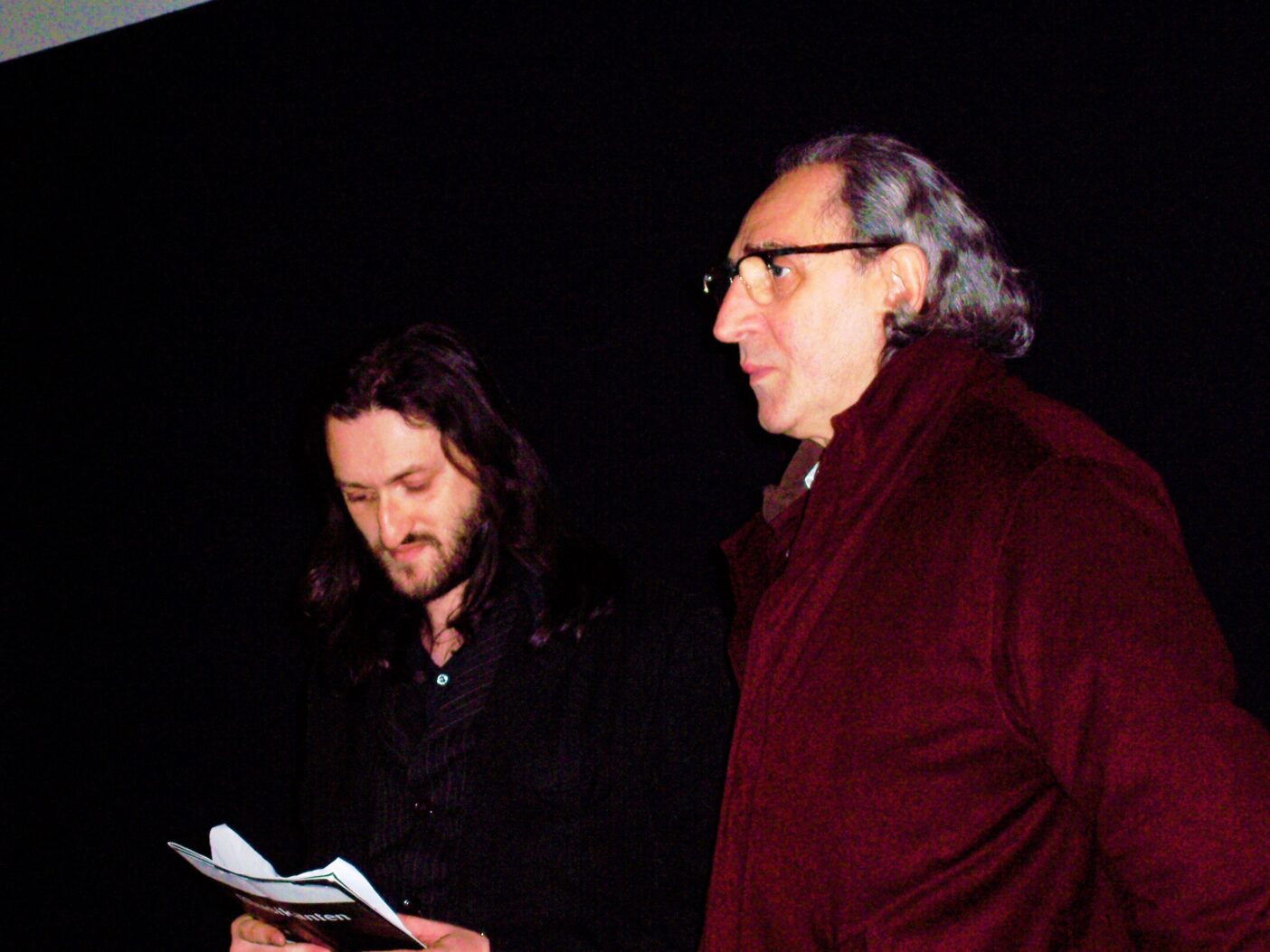 In an old damask jacket I find papers written in blue ink. It’s about a dialogue with Franco Battiato that dates back to twenty years ago. In this unpublished interview we talk about love, wars and spirituality. I think how much we miss his voice, his truth, his way.

Rereading that dialogue moves me and shocks me its vision, its mysticism, its divination, its truth. I decided to publish a fragment of it. An attempt at light. Sometimes I think it was no coincidence that we met in Cuenca, in the tip of Don Quixote.

Humanity appears tired, immobile, indolent. Is there still a way forward?
It’s the invitation I’ve always made: wake up and search.

Years ago he played for the first time in Baghdad. How did you experience this war which is also destroying the cultural monuments of a people?
Seeing culture trampled on is an everyday thing. Just look at Italy. But this makes me less effect. Instead, these abuses by certain nations always have an effect, pretending to defend who knows what ideals of goodness and beauty, but then they are real savages like those who fight. On the other hand, the people are usually divided between more or less terrible dictatorships and fake liberation; and the same people always lose out.

The Tetralogy of Love: Hope in The season of love, the mysticism of And I’ll come looking for youunconditional love that protects with The cure and the transcendental betrayal of Parallel lives. What is love?
Love is a color from a large palette.

In Mesopotamia he sang – What will remain of me? – Perhaps art, music and poetry are all that will save us and remain of humanity and then there are silent lives lived on the margins and in silence. What remains of man?
It’s about who you are as an individual because in the end art doesn’t really belong to you anymore. Sometimes there may be someone who doesn’t write anything important but as a man he leaves a stronger mark than many works.

After this dialogue we met again, this time in a public conversation about his movie Musikanten with an extraordinary Alejandro Jodorowsky as an elderly Beethoven. As I write this page for Rewriters I am reminded of some songs by him that I loved.

Spirituality in Franco Battiato
and the return to the light

Music can be a divine prayer to talk to God. Franco Battiato’s research is a spiritual, poetic and mystical research. Like the mystic John of the Cross and the Persian poet Rumi, Battiato investigates the infinite, the absolute, the Divine. It all started from an existential bewilderment that led him to rediscover that I in that unfathomable dimension in which the wanderer-Battiato seeks silence, slowness for rise in a suspended timeregress into that lost paradise and rediscover the light of thought that illuminates the road and drives away the dark thoughts of existence.

And I’ll come looking for you marks the mystical turning point of Franco Battiato. A prayer of love that reveals a very deep spiritual search: it starts from a need, from athe need for communion, for an encounter with the othera necessary act to rediscover oneself and finally draw from that One above good and evil, from that Most High who looks at men with pity and invites them to a more essential life, detaching themselves from little joys and from pettiness up to aiming – as Dante writes – at the stars.

A god who teaches us to free ourselves from matter, from our miseries, from our reductive and selfish visions, to start a process of rebirth and “act like a hermit who renounces himself”striving to become better up to embracing the divine image of this reality.

An ocean of silence flows slowly

Without center or principle

What would I see of the world

Without this light that illuminates

Overcoming the small daily joys, overcoming our limits, of our matter passes through silence. An obligatory step, a necessary crossing to draw on peace, inner dialogue, listening and the law of the soul. Only in silence can you see the light and find peace. Only in silence does life return, brighter, in a non-place, in a non-space, in a point far from our solar system.

A boundless place that goes beyond the dimension of time and space and smells of divinityleaving us feeling part of a whole, in profound harmony with creation, with that inviolate world where the truth of the world reigns, as Franco Battiato writes in another text entitled Praise to the inviolate.

The search for spirituality takes place through what Battiato calls storms to cross, what else are they if not our falls, our defeats. But on this journey we are not alone, there is a divine presence that protects us with his “caress of a caretaker“.

Just sit under a tree to look at the other self and understand “The Celestial Mechanics” and the time that crosses us with the atmospheric sensations returning fetus, swimming in the placenta-mother-earth. That pre-Christmas dimension, before the world, that return to water and to God who calls us through the sound of bells or the verses of a prayer or a rosary recited at dawn.

“If you feel bad

Turn to the Lord.

Believe me, we are nothing

miserable streams without a source”.

Among Battiato’s most powerful and sacred compositions is The shadow of light, a text in which all human suffering emerges before the perfection of God. Franco Battiato’s musical and existential research here becomes lyrical and the artist becomes demiurge. A young girl at a concert, listening to her own The shadow of light she decided to start a monastic journey by becoming a cloistered nun, turning her life exclusively to the contemplation of God.

Defend me from opposing forces

At night, in my sleep, when I’m not conscious

When my path becomes uncertain

And never leave me

[…] How not to waste the time that I have left

And never leave me

Because the peace I have felt in certain monasteries

Or the vibrant understanding of all the senses in celebration

I’m just the shadow of the light

A prayer, a true supplication addressed to the Most High. An intimate, profound conversation in which man, prey to storms and opposing forces, humbly invokes his Godhis father, recognizing his own frailty, urging his God not to leave him alone, not to abandon him to his pains and mistakes in order to put an end to life cycle and ascend to a higher world, to what could be the kingdom of heaven Christian or Buddhist Nirvana, the supreme light that surpasses any shadow or earthly pleasure.

And silence, prayer, waiting, emotion, empathy, giving oneself to the other, the caress for a mother who is about to leave and become a butterfly againresistance to defeats, concern for a child, walking together, hand in hand, breaking bread, the love that sublimates every little thing, that pure love for another being is the cure for humanity.

I will protect you from the fears of hypochondria

From the injustices and deceptions of your time

Give failures that by your nature you will normally attract

Each being is special in its uniqueness. In this supplication Battiato renews his exhortation to always pursue the depth of feelings, even the darkest and most hidden ones to seek a horizon of meaning and find the way of the most sacred life even in bewilderment. Franco Battiato, in his prophetic visionanticipates the words of Pope Francis “through contemplation our heart will be free to act”.

In his inner and spiritual journey Battiato, like a shaman, he shows us a road, a route, which leads us not to forget the ruins of the world, the abuses, the drift of the values ​​of brotherhood and justice and the indifference towards the least. But, above all, it teaches us to cultivate hope, a believe in the light and in the civil redemption of manand in his humanity that smells of divinity. “And maybe all this will change”only if man will be able to recover the dialogue with mother-nature even if the “Spring Late in Coming”.

“Christ in the Gospels speaks of reincarnation” sings Battiato in Will and his broken and trembling voice in the unedited posthumously moves We will be back again .

A sound descends from far away
Absence of time and space
Nothing is created, everything is transformed

Sometimes prayers are screams of pain like the dungeon Stage Door, an unreleased song released on the b-side of Shock in my town . The writing is in four hands with the philosopher Manlio Sgalambrolike the rest of the same The cure, The door of supreme terror and other musical peaks. In these verses there is an attempt to save humanity and go back, in that world of stillness, before the chaos.

It feels like I’m travelling
in rarefied zones of thought,
where my disposition to live is refined
that is intoxicated with styles and disciplines.
In a mocking set of spare desires,
I celebrate my pride my senses my uniqueness.
Those were days of absurd and depressive tiredness,
of a total lack of clarity.
When you wonder in some unfamiliar bed,
what did you do and why do you live in such strangeness.
If you knew what a pain existence is
who sees black where there is none.
The thing is, I can never go back
that I can’t live with you or without you,
believe me.
Because we are free to do what we want,
to kill, rape and rob
and spewing senseless criticism,
always talk and say only useless bullshit,
for a daily need for tension
in this natural display of madness.
One can defend oneself by remaining in the mode of indifference
against this exponential growth of madness and violence,
or go back to the old patience
or go back…
But I would like to be an eagle to see the plan of the world
that leans towards us and the laws that bow
throw me to chase your desert
and the solemn lores and the golden doors begin the journey again.

Tonight on TV Thursday 11 August 2022, The programs on the air
The Ukrainian mimes Dekru at the Teatro Feronia in San Severino Marche with the SIC project ⋆ Latest...
GOSPELHEIM
Tweet
Share
Share
Pin