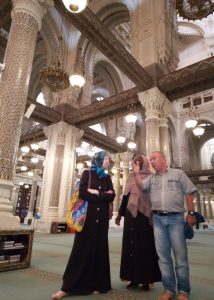 Priest of the diocese of Lyon, Michel Guillaud arrived in 2006 in the diocese of Constantine and Hippone (Algeria). After seven years in Batna, in the Aures, he was sent to Constantine and Skikda. Since 2014, he has been vicar general of his diocese and since 2015, secretary of the Episcopal Conference of North Africa.

Christians represent less than 1% of the population in Algeria and are scattered over the 2.5 million km² of Algerian territory. Over the course of a day, those who ring at my door or whom I meet are therefore mostly Muslims. With them, I am challenged to an existence consistent with the faith that I profess; I am at the service of their human and spiritual growth; I also witness the fruits of the Spirit in their lives and this nourishes my prayer. My mission with them is basically the same as with anyone else, even if they do not identify and celebrate the triune god as the source of their life.

As a priest, it can happen that I live all week without meeting any Christians, and only have a handful of Christians at Sunday Mass, which is usually held on a Friday, the weekly day off.

As a foreigner, I have to make a major effort to meet the other, to speak their language (otherwise I would only meet old people or rich people).

Exceptionally, one or the other can ask to become a Christian. I welcome him with joy to walk together, without auguring the end that his journey will have, so great are the difficulties in social life for those who make such a choice, even if the authorities of the country do not prevent it. .

The Church has just, on May 15, 2022, celebrated the canonization of Charles de Foucauld, who lived most of his life as a priest in Algeria. While being truly a man of prayer and generosity, this man from the French nobility and military training was deeply imbued with the colonial spirit; he scarcely distinguished French civilization from the Gospel, even if he was lucid about the faults of his ambassadors. It would have been totally anachronistic and scandalous to canonize him if he had not known a decisive transformation when in 1908, nearly dying of fatigue and scurvy, he was saved by the Tuaregs who mobilized to look throughout the region for what regain strength. He then realizes that his mission is not primarily to educate them, to “civilize” them and to make them Christians, but that the Spirit has preceded him to them, that it is first of all to be attentive to them, to give thanks and to live the Gospel with them. The Spirit will do what it must do. This is how Charles de Foucauld died in 1916, without a companion in his mission, and without having baptized a single Tuareg. But he will have a magnificent spiritual posterity and will deeply mark the Church of the 20th century. More than twenty groups or congregations are part of its spirituality. If he had died in 1908, he would never have been canonized. His second conversion, that of 1908, is on the contrary at the origin of a new “missionary paradigm”, which does not think of the mission as a numerical expansion, and first of all as a contribution to the other of something that he would not have, but as a discovery with him that “the kingdom of God is at hand” (Mc 1, 15).

The canonization of Charles de Foucauld confirms, validates what the Church of Algeria has experienced since independence, and the missionary life of the 19 beatified from Oran in December 2018, Bishop Pierre Claverie and his fellow martyrs of the years 1994 -96.

And the few Algerians who become Christians, led to us by an interior call when they did not know us, whom we welcome but did not call ourselves, confirm that the Spirit is doing his work, his part.

This text is the long version of his testimony published in the Mail Mission and Migrations (n°3 – October 2022).

Fr. Michel Guillaud, fidei donum in the land of Islam