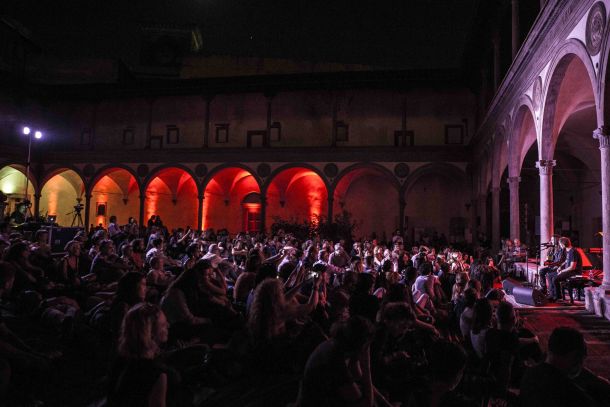 Great names in music and culture will read and reinterpret the spirit of the place through performances, talks and concerts. Between the Basilica, the Last Supper and the Great Cloister artists, intellectuals and writers will meet with events site specific, in a context where spirituality and beauty, memory and history, past and future find a synthesis; was chosen as the central theme epiphany / apparitionwhich recalls the desire to return to live the relationship with art with wonder and emotion and at the same time the next celebration (2023) of the eight hundred years of the living nativity scene of Greccio wanted by Francis of Assisi to make everyone understand the mystery of Christianity.

September 20 Angelo Branduardi will perform pieces from the album “L’infinamente piccolo”, dedicated to the story of St. Francis of Assisi, in an intimate performance for voice and violin, accompanied by a grand piano, which will be exceptionally welcomed right inside the Franciscan basilica largest in the world.

The great trumpeter Markus Stockhausen, son of the composer, in trio with Lino Capra Vaccina and Alireza Motazeviwill address the metaphor of time in music (22/09). Petra Magoni and the lutenist Ilaria Fantin in the show What are the Clouds they follow an itinerary from 1500 to today with ancient and contemporary notes, adapted to the archlute and other ancient instruments and interpreted by the splendid voice of Magoni (22/09). Linda Messerklinger and Luca Vicini – aka “Vicio” of Subsonica – will be the protagonists of Soul-L, cooperation project between art, science and environmental activism (22/09). The closing of the exhibition will be entrusted to the great minimalist Wim Mertensauthor of soundtracks for the films of Peter Greenaway and the plays of Jan Fabre, who at the first light of dawn on 24 September will bring his Santa Croce project – solo piano.

Scheduled a talk with the historian Alessandro Vanoli starting from its publication “The Tale of the Seasons: the revelation and the time of return” (Il Mulino). It will be a literary, historical and artistic journey in memory of Chiara Frugoni, recently deceased, great protagonist of the iconographic research on Francis of Assisi, deeply linked to Santa Croce and Genius Loci (23/09). Don’t miss the performance between words and music “The Epiphany in Nature and the Epiphany of Nature”, with the writers Ilaria Gaspari and Antonio Pascaleaccompanied by the voice of the singer-songwriter Letizia Fuochi (22/09), and the conversation with several voices with the professor of medieval history Franco Cardini on the theme “the epiphany of the divine”, on the trail of his essay “The abodes of God. Where the Eternal lives” (Il Mulino): if God does not need a fixed abode, man has always needed to establish a place in which to meet him; hence an excursus on how God proposed himself in the works of man, in architectural forms that are often lost or misunderstood, for a dramatic and intense journey towards the places of the eternal on a human scale.

The event is organized by a cultural association Controradio Club, Opera di Santa Croce and Controradio, in collaboration with the cultural association La Nottola Di Minerva and with the contribution of the Municipality of Florence for Summer Fiorentina 2022 and the Metropolitan City of Florence. “Genius Loci, discovering Santa Croce” represents a unicum in the Italian panorama, where the temporary nature of the festival is combined with a long-term cultural strategy that aims to enhance an exceptional cultural heritage.

Program with timetables and methods of participation on: www.controradio.it www.santacroceopera.it

Florence: «Genius Loci» is back in Santa Croce, with free events – Firenze Post