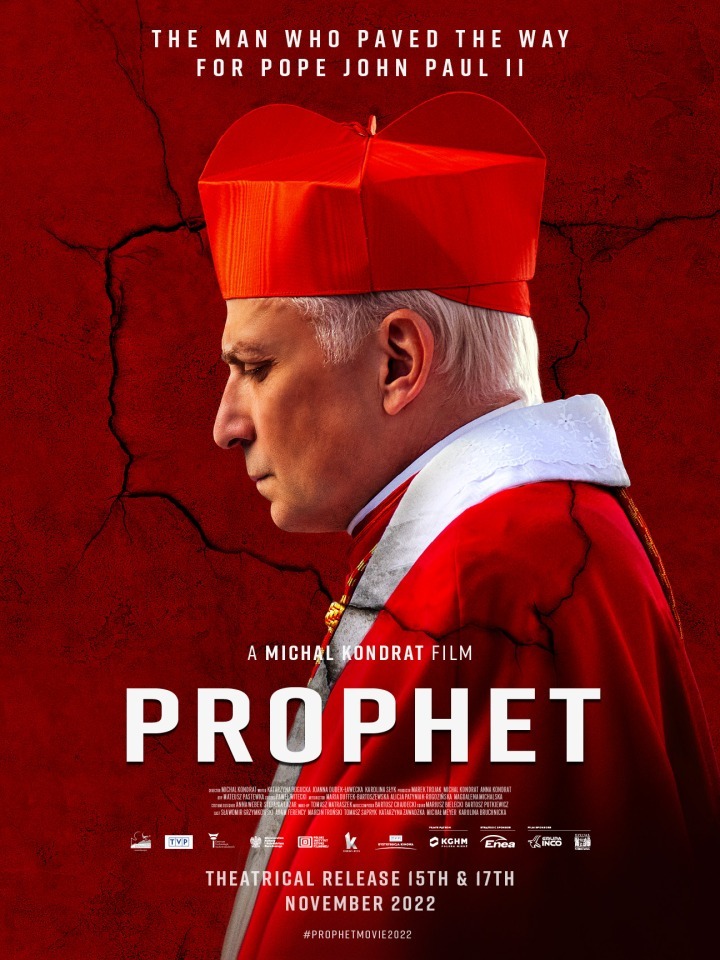 “Prophet” will be shown on November 15 and 17, and is an introduction to the man who led Poland through decades of communist rule and laid the foundation for John Paul II

Speaking of the collapse of communism in the 1980s, historian Timothy Garton Ash noted that St. John Paul II, especially with his 1979 trip to Poland, was a decisive factor in the unfolding of those events. “Without the Pope there would have been no Solidarity. Without

Solidarność there would have been no Gorbachev. Without Gorbachev there would have been no collapse of communism.” Ash could have gone even further back with his “domino effect” timeline if he had wanted, because John Paul II’s efforts were built on the earlier work of someone else – Cardinal Stefan Wyszyński, recently beatified and protagonist of a new film by director Michal Kondrat titled Prophet.

Kondrat is best known as the driving force behind religious docu-dramas such as Faustina: Love and Mercyfrom 2019, but with Prophet he finally ventures into the world of directing. In an interview with the Polish newspaper Gazeta Krakowska, explained that his desire to make the film was driven by what he perceived as a general lack of knowledge among young people in Poland about one of the most beloved national heroes. They are somewhat aware of Wyszyński, Kondrat said, but they don’t really “know” him.

For that, he hopes that Prophet he’ll help solve the problem by introducing the audience to a person he describes as a Clint Eastwood in purple.

To this end, the film obviously depicts the heroic milestones of Wyszyński’s episcopate, such as his “Great Novena” pilgrimage to the Black Madonna of Częstochowa and his anniversary celebration for the thousand years of the Christianization of Poland. Wyszyński’s stoic determination to celebrate these events nationwide humiliated and infuriated the Polish communist regime. The film also takes care to include more personal matters, such as Wyszyński’s first interactions with a young priest named Karol Wojtyła, the future author of extraordinary things.

All of this would have happened later anyway. The film begins in 1953, with Wyszyński about to be released from a three-year internment for daring to speak out against the Polish state. On the way home, the newly liberated Wyszyński recalls an incident from his time as a chaplain in World War II: a Polish farmer walked leisurely through a bombardment, throwing seeds as he went. When the young Wyszyński had rushed to pull the man away for his safety, the farmer had simply said: “We need to sow, or there will be only fallow land.” This is described as a formative moment, a philosophy that the cardinal would adopt in the decades of struggle against communism.

Much of the film documents the verbal confrontation between Wyszyński and Władysław Gomułka, first secretary of the United Workers’ Party of Poland and the de facto leader of Poland for most of Wyszyński’s term. Gomulka is presented as a genuine “villain”, so militant in his atheism that he cannot even address Wyszyński with one of his clerical titles, instead referring to him only as a director of the Church. Communists love trying to control the tongue, don’t they?

When not focusing on the ongoing mind-bending between Wyszyński and Gomulka, the film follows the cardinal’s pastoral dealings with a small group of laymen, including Kazia, a girl he mentors after she is caught stealing food , and Magda, a teacher to whom he regularly offers advice. It is through Magda’s director husband Janek that we eventually learn the source of the film’s title. Looking for money, Janek is recruited by Gomułka to spy on the cardinal as part of “Prophet,” a covert surveillance operation designed to uncover any evidence the government could use to accuse Wyszyński of treason. These efforts to trap Wyszyński will ultimately bring much suffering to those around the cardinal, especially Kazia.

Most interesting of Wyszyński’s acquaintances are the “Little Eight”, women who run most of the day-to-day operations of the parish, including the editorial office, where they are not averse to covertly printing dissident pamphlets to help the Polish resistance movement clandestine. The scenes in the film in which the cardinal is faced with a difficult situation and orders his aide to summon the “Little Eight” to manage the situation are amusing. It’s almost enough to wish for a more fantastical and unrealistic version of the film in which the “Little Eight” carry out secret missions Charlie’s Angels for the Church whenever the need arises.

But this is material for another type of work. True to its documentary roots, with Prophet Kondrat is fundamentally interested in presenting a respectful and realistic story. Overall, the film presents itself as a mostly straightforward account of events, although there are occasional directorial flourishes, especially in the scenes surrounding the violence that erupts during the 1970 protests. With this approach, the film realizes what Kondrat set out to do, which is serve as a nice introduction to the man who led Poland through decades of communist rule, protecting the country’s spiritual foundations and setting the stage for the eventual triumph of Pope John Paul II.

Prophet will come out in some selected rooms on 15 and 17 November.