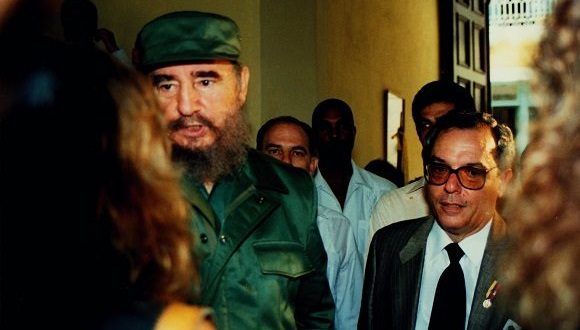 There are tremendous dates, and September 11 is one of them. This day is one of those that have been marked in history by the occurrence of shocking events. I believe that among these events is the birth of Eusebio Leal Spengler, Doctor in Historical Sciences and Master in Archaeological Sciences, Historian of the City of Havana and Director of the Restoration Program of the World Heritage in Cuba. If we add to these coincidences that Fidel Castro and Eusebio Leal were born in the same country and met, that already deserves higher studies in the occult sciences.

How and when did these two exceptional beings bump into each other?
Eusebio himself told it: “when the restoration of the Palace of the General Captains began, on one occasion, Fidel went to the Historic Center of Havana, specifically the Palace of the General Captains, accompanying the mayor of the Chilean city of Iquique, and asked why Loyal Spengler, but he did not find me because I was in the Soviet Union as part of a Cuban delegation”

Eusebio refers: “Fidel knew about me because he already Celia I had told him about me, and in a second round in which he comes to visit the Historic Center, we met and from that moment a very great adventure of spirit began for me. Needless to say, it was only through him that I entered what a friend called the torrent, the tide of the Revolution.”

Many works in Old Havana were inaugurated by Fidel, who accompanied visitors from around the world there. Photo: Fidel Soldier of Ideas

“When I was a teenager and it was the fight in the Sierra Maestra, I drew a lot then, I made a whole notebook with everything I imagined the landing of the Granma and the insurgency’s fight in the Sierra Maestra had been, Leal recounted. From that moment, and after, he began the knowledge. The Revolution triumphed, it opened all the doors and windows to a generation and several generations, and following Fidel’s words, which were shared by an entire people, was for me more than a sensation and an experience: it was a teaching. I had then very few letters and very little intellectual development and a lot of thirst for knowledge, and that opening of the Revolution meant all that. I could not imagine that years later the restoration work of the Palace of the General Captains would begin and I would have the opportunity to visit it”

He spoke about Fidel Leal on many occasions:

“On one occasion he took me with him to South America and on the way back, over the Colombian city of Cartagena de Indias, flying over it, after having spent very intimate moments there, he asked me what we could do for Old Havana. He personally asked for our ideas; We took them, which were the result of experience, and he, as a lawyer, began to transform all that into Decree-Law No. 143 of October 1994, which changed history and was for me the most advanced legal document in terms of protection of cultural heritage that was never done”

“He subordinated a whole machinery at the moment that tourism began, all that movement began, at the moment that the special period also began, he put all that is contained in the document at the service of the work, and he did not spare to she all kinds of attention. Then he consulted me periodically, especially worried that the restoration would join, in an equitable way, the social work “.

“He can talk for hours, however, he is capable of making a spectacular speech like in Rio —de Janeiro—, or, for example, I remember one in Stockholm, Sweden; in a speech of a page he is able to say everything ”

“The sharpest, the most intense interpreter of the reality of his time, the deepest connoisseur of Cubans.” Fidel rejected all dogma, continually reinterpreted reality and sincerely believed in the capabilities of man, in the redemptive vocation of every revolutionary. He did not like deception and simulation. With him “you had to be ready for the truth”.

“Fidel was a man of culture, he was a thinker who prepares himself, studies and never believes the knowledge he has acquired enough.”

“When I learned about him from the testimonies of his own life – says Leal – I knew that, for example, in university studies he was able to take many subjects at the same time, study and at the same time, as is stated in his academic record. demonstrate the enormous lucidity and ability to be used thoroughly in very diverse subjects”

“He has been a tireless reader, he has read everything necessary for the knowledge of the history of humanity, culture, literature, art. That’s where many mixed appreciations come into my memory, from intellectuals I knew who knew him; of friends and comrades in struggle who shared very transcendent moments with him and one of the things that impressed us all the most was his ability to acquire knowledge and project it in his relationships and in his political discourse ”

“A conviction accompanied him from the first years of his life: his destiny was inextricably linked to a cause of social justice for which he would sacrifice fortune, time, moments for friends… everything that was necessary to put aside to carry out what he wanted. he considered fair, convenient and necessary for Cuba”. 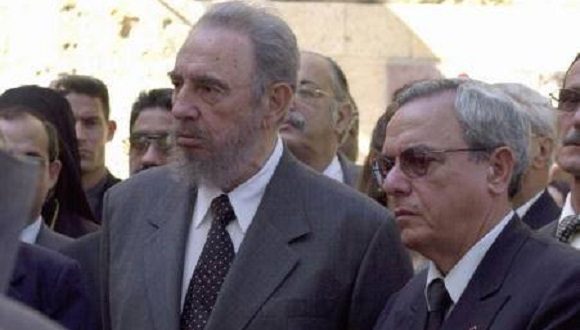 I don’t know the place or time of the snapshot, but note that the expression is the same, showing a special match. Photo: Fidel Soldier of Ideas

Countless encounters took place between them. Anyone who had the opportunity to see them face to face knows that their conversations were a fight between two immense speakers, it was a master class that left anyone speechless, very difficult for the journalist who did not have a recorder at hand, because copying them or retaining so much Wisdom was mission impossible.

As far as I’m concerned, I remember it vividly as if I was seeing it. The first interview I did with him at the beginning of the 1980s, when he was not so well known, was titled: A Loyal Havanan. Since then there has been no tumult in which we were (and there were many), meeting places, conferences, receptions, where he did not have the courtesy of an affectionate, friendly greeting. It is not necessary to speak of his immense memory, he remembered everything.

I interviewed him many times for Revista Bohemia, until once he told me: “But Susana, every time you talk about Havana I can’t be there”, and he always gave in. Seeing him upset scared me. On one occasion he was annoyed with me, we were half an hour late for an appointment to record a TV program “Encounters and Traditions” for the Educational Channel and when I saw his face I was terrified. When he saw me approaching, at a distance of more than 100 meters, he told me: “Look, I can’t waste my time like this, we’ll do it another day”. I begged him, and he told me: “I know what television is like, that the camera, that the driver, that there are no means of transportation, I know that, don’t repeat it to me”, he was very upset. But in the end he relented and we did the job. So it was.

There are many anecdotes between Fide and Leal, but something very special caught my attention: Fidel listened to him like a student to his best teacher, and Leal did the same. Another detail was that when referring to Fidel, Leal called him “He”, and everyone understood him.

And to continue speculating with the cabals, their names came from two different families from distant places on the island of Cuba, they mean what they were, sorry, what they are: fidelity and loyalty, two attributes that they poured into their homeland and humanity. , without a doubt.

I am sure that Fidel Castro and Eusebio Leal were of twin spirituality. I don’t know if it was because of their religious training in their early years or because of a gift that came from the cradle, the truth is that if they looked at each other they understood each other.

Leal spoke a lot about Fidel, but this lapidary reflection:

“First I want to say that his fame and his name are linked to any person anywhere in the world who has received the generous hand of Cuba. Fidel will live because he survived all dangers and triumphed, and if Cuba exists, it is because his name cannot be dissociated from the people from which he emerged”

I hate comparisons, but in this case I consider that it will not be possible to talk about Havana without taking into account the name of Eusebio Leal Spengler, I am convinced that the souls of those who go to another dimension meet, and from wherever they are, Fidel and Leal will continue in eternity revalidating the meaning of their names, and lavishing their legacies.