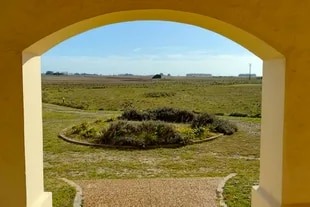 Altamar is the monumental residence for spiritual retreats of Opus Dei in Mar del Sud, a seaside resort located in the southeast of the province of Buenos Aires. The imposing façade of the building contrasts, however, with its interior asceticism.

The Work of God or just “the Work”, as its faithful prefer to call it, is a hierarchical institution of the Catholic Church that has the pastoral task of “contributing to the evangelizing mission” of Christianity by spreading “the sanctifying value of work”.

In “La Casa”, as the 2000 square meter building located 200 meters from the sea in Rocas Negras is known, its faithful carry out spiritual retreats, coexistence and academic activities of Christian formationmainly during the months from November to March.

Due to the discretion with which those who make up “the Work” —numerary, supernumerary and auxiliaries— are handled, Altamar has been shrouded in mystery since its originswhich led to some delusional theories, especially after a brief conflict with the neighbors over a towpath that had been blocked and was finally released for public use.

To shed light on one of the most enigmatic constructions in the far southeast of Buenos Aires, THE NATION toured the interior of Altamar with its administrator, Marcelo Martin, Opus Dei supernumerary in Mar del Plata, and Ruben Moroits manager, who has lived there with his wife year-round for two decades.

the building of Altamar can be seen kilometers away within the framework of a desolate Pampean geography that merges with a sea of ​​seven colors. It is surrounded by dunes and golden grasses and a grove of stone pines that was planted during its construction.

A complete tour of the residence from the basement to the terrace, going through its 21 rooms and his little chapel account for its internal discretion, frugally decorated with maritime motifs, which places it in the antipodes of the ostentation that prejudice could entail.

Altamar began to be built in 1999 on land donated by the businessman Jorge Neusswho committed suicide in 2020 immediately after killing his wife, Silvia Saravia.

Neuss was the grandson of Hermann Neuss, founder of Soda Neuss Belgrano in 1891, a brand that came to dominate the local soft drink market in the first half of the 20th century. Over time, the family diversified its businesses and expanded into other areas such as energy. In 1997, Neuss acquired the farm located on the southern margin of Mar del Sud, formerly called El Porvenirwhich had been owned in the 1940s by the German spy Karl Gustav Einckenberg.

Renamed La Lucila, the ranch functioned as a stud farm due to “the excellent conditions for horse breeding, mainly due to the cold climate, the maritime air, the quality of the water and the richness of its soils.”

A fraction of this property was donated to the Buenos Aires Cultural Association of Opus Dei, whose administrative headquarters are located in the city of La Plata. Although the benefactor was not a follower of the liturgical precepts of the prelature, on the other hand, his wife, Silvia Saravia, was, confirmed spokespersons for the work.

The public irruption of Altamar was surrounded by controversy from its origins due to a fleeting conflict with the neighbors of the townwhen the property’s waterfront was fenced off, blocking fishermen’s passage to the south side of the beach.

The construction had been approved by the Deliberative Council of the General Alvarado party, whose head is Miramar, with the approval of the radical mayor Marcelo Honorswithin the framework of a venture with a sea front of 300 meters and at least 10 hectares of land.

Faced with the claims, and even when a street did not correspond there, the members of the work decided to open the way and the conflict with the neighbors was extinguished. “It is like you want to open a street between the sea and the houses of Rocas Negras that are on the cliff, legally it does not correspond, but the passage was opened anyway”, says Martín, the administrator.

However, “now we have another problem,” he adds, and points to a new path, parallel to the sea, which enters the land of “the House.”

“The 4×4 trucks were breaking up the dunes and made a new track even closer to the building,” says Martin. As can be seen walking around, the new path that forks from the original is inside the property and eroded the chain of dunes that now looks blurred.

“We have always had good relations with the neighbours: we recently helped a family recover their house that had been occupied. The usurpers rented it out to other vacationers,” he says. Ruben Morothe person in charge, during the tour that passes very close to the monolith of the Virgin Stella Maris, an obligatory tourist stop for visitors to Mar del Sud.

“We don’t go around saying out loud that we belong to Opus Dei, but if someone asks us, we can spend hours and hours talking about the work,” Martín answers when asked about the discretion, which borders on secrecy, that its members observe.

And he says that its members go to mass regularly, confess and receive communion in the churches that are located closest to where they live, and that these temples are not necessarily linked to “the Work”.

The administrator of Altamar is a “supernumerary”: that is, according to the Statutes, faithful of the Prelature married or single, “but in any case without commitment to celibacy”, unlike the “numeraries”, that is, those who observe apostolic celibacy.

“At home we do activities with families and young people, all aiming at human formation and getting closer to God, so that all of this can be returned to society. That is the spirit of what we do here,” says Martín, who is an agronomist and earns his living as an agricultural businessman.

“The retreat house is very nice but the most impressive is the environment: nature in its splendor, a mixture of pampa, sea and sky, in a combination that facilitates recollection and encounter with God”, can be read on the site where the reservations to the spiritual retreats of Opus Dei.

The meetings that take place in the different houses of Opus Dei are paid for by its faithful. In the case of Altamar, for example, there will be an activity in November of this year and it costs $30,000 for three days: includes single room, breakfast, lunch and dinner.

The money is mainly dedicated to the maintenance of the building, a giant caressed by the sea that suffers the ravages of the weather in an area where the wind blows from the southeast for approximately 70% of the year.

The internal walls of Altamar are painted a slightly lighter salmon color than the external walls, the floors are ceramic and the ceilings are white. The building has a basement projected as a parking lot or storage room, although it remains empty; It has several annexes, two floors and two large facades, one with a view of the sea and the other of the countryside..

The rooms have nautical names (Bitácora, Palo Mayor, Sotavento, Mascarón, Alcázar, etc.) and are small, rather bare: they have one or two single beds, a bedside table, a desk with a private bathroom and a small aluminum window. DVH with checkered curtains through which you can appreciate the immensity of the ocean or the pampa, as the case may be.

The residence is completed with a kitchen and a community dining room with capacity for about twenty diners And views of the golden pastures and the sea, a laundry, some internal offices, an outdoor grill and the main oratorywith white painted baked brick walls and columns, ceramic floors and a polished granite pulpit.

The small chapel is presided over by a large painting of the Virgin of Guadalupe, and to her right there is a carved and embedded bust of Saint Josemaría Escrivá de Balaguerthe founder of Opus Dei in Spain, known as “the saint of the ordinary.”

A Escrivá de Balaguerto whom the “left” discourse is related to the most extreme of “the right”, a little beyond their traditional conservative positions, several miracles or “medically inexplicable cures” were attributed to him.

The case for which he was turned into a saint it happened with the healing of the doctor Manuel Nevado Reywho suffered in his hands a “cancerous process of severe chronic radiodermatitis at the third stage, in an irreversible phase and with an unfortunate prognosis”, an incurable skin disease caused by radioactivity.

The story goes that, with no possible treatment, Dr. Nevado Rey invoked the holy card of Josemaría and prayed for several days: he was cured, inexplicably or miraculously, depending on who was looking at it, being able to return to work in a short time.

Escrivá was beatified on May 17, 1992 in Vatican City by the Pope. John Paul II. Ten years later the same Pope canonized him, making him a Saint.

“In any case, the phrase Opus Dei, which has extended its effectiveness far beyond monasticism, acquires its own meaning in the context of the liturgy conceived as the place where the mystery and the ministry, the priestly service and the commitment community tend to coincide.”

From the book Opus Dei. Archeology of Giorgio Agamben’s profession.

“Retirement days. Recollection to know God, to know you and thus progress. A necessary time to discover what and how to reform: what should I do? What should I avoid?” said Saint Josemaría.

When sources are asked which well-known or famous people from fields such as sports, politics or culture have visited Altamar, they reply that they prefer not to spread names.

It is one of the precepts that follow who stay in “La Casa”, in the confines of Mar del Sud, between the silence of the people, the sound of the wind and moderation.

In short, as the founder of the work has written, “discretion”, which:

“If it’s not the edge of your combat weapon, I’ll tell you it’s the hilt.”

Exclusive: this is the inside of the mysterious and monumental Opus Dei spiritual retreat house on the Argentine coast