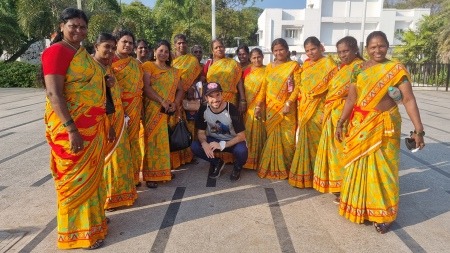 In line with his previous book in which he traveled the Silk Road, the Argentine journalist Fernando Duclós, known on social networks as Periodistán, has just launched his book “A trip to India of flesh and blood”, where he displays his impressions and sensations of spending five months in this nation of 1,400 million inhabitantsa territory barely larger than the Argentine one that presents itself as a place of permanent stimuli, sometimes overwhelming.

And finally the day came…
MY NEW BOOK!

The more than 15,000 readers of the two previous books already know what it is about; Now, an impressive trip to the real India, the one of flesh and blood, human, the intense and monumental…

TO BREAK THE PAGE! pic.twitter.com/bxdS8PJwme

“Very little is known about a country that is equivalent to seven Brazils. Before traveling I started looking for books about India and I found that everyone talked about yoga, meditation, Ayurveda, Gandhi, always spirituality. Obviously it is a very important dimension but I wanted to go find the India of flesh and blood, that of day to day. What is the daily life of an Indian like? Do they all speak the same language? How is the caste system managed? and what arranged marriages? Is it poverty as they say? Not from an exotic or condemnatory look. Think that one in five people in the world lives there then to understand India is to understand a large part of the planet”, says Fernando Duclós (1986). in an interview with Telam.

His more than 200,000 followers on Twitter -the platform that catapulted him to fame with his alter ego, Periodistán- and his almost 50,000 followers on Instagram were able to see some previews of the adventures of this kind of human tide on networks., with bustling streets and chaotic traffic, spicy aromas and strident colors, with a pantheon of countless deities and a huge film industry, with elephants or little monkeys that walk the sidewalks of any city. “I traveled through Iran, Afghanistan, Somalia, Oman, Kosovo, Chechnya, Uzbekistan and many other countries but there is nothing, nothing, as different as India,” she stresses.

“It’s a world different from everything else. Think that 80% of India, that is, Hindus, believe in reincarnation, in having a good karma to reincarnate in the next life in something better, in another caste. Someone who believes that is not simply eating more spicy food or praying more times a day. No. They have another conception of time, of love, of life, of marriages, of death, of work, of everything. I think that that is why, being such a different world, what comes to us is what we can more or less adapt to our western lives: yoga, Ayurveda medicine, meditation… It comes in an incomplete way but it comes, I think that’s why we only know few generalities of India”, analyzes Duclós.

We start the summer talks at Yunta Bar 🙌🏽 today with @periodistan_ 🍀talking about his travels through India and the Silk Road 👏🏽 pic.twitter.com/xNDtrlNBQ5

With a narrative thread that is structured into chapters based on geographical and chronological criteria, the author seeks to portray the daily life but also the culture and customs of its inhabitants, of the different regions you visit, while including the topics that seem to be essential: poverty, public transportation, the caste system, the place of women in society, religion, Hinduism, the pantheon of gods and goddesses , arranged marriages, sex, love, the history of the country.

Anecdotes slip through, such as seeing a dentist on the street with all his instruments working in his patient’s mouth, or the ashes of corpses on the way to the sacred Ganges river, the majestic Palace of the Winds, someone who shaves in the middle of the street, a monkey that eats the floral offerings that are left to the Buddha in a sanctuary, traditional dances and rituals, ascetics in the streets, supermarkets, mosques, bazaars, the flower market in Calcutta or a ceremony to worship the gods.

“More than a country, India is a subcontinent: a civilization where a lot of completely different people live together. There are a lot of Indies within a single country. In the north and in the south, for example, they speak different languages. No they understand each other, they eat different foods, they have different customs. If you think ‘we’re going to try Indian food’ as if it were just one thing, you’re wrong. I insist, there are 1.4 billion people,” explains the author.

– You say that India is a place of permanent stimuli, sometimes overwhelming, how would you exemplify that?

– India is excess, exaggeration, 24×7 stimulus, total intensity. There is no peace or silence, mainly in big cities like Bombay, Delhi, Calcutta. It’s a whole new world where everything is surprise. You go out into the street and literally anything can happen, a birth, a death, a passing cow, an elephant. Horns are heard absolutely all the time, at all hours; crossing the street is a miracle. It is absolute and total street and traffic anarchy but it works very well. The first two months I entrusted myself to all the gods of the Hindu pantheon to cross the street and it took me ten minutes to find the moment. Until I realized that I never saw crashes or run overs. And I cheered up. In the end he was an expert in crossing. For those who travel to India, the most notable first thing is the madness of the traffic.

– In a section of the book you talk about the north, which is known as the golden triangle: Delhi, Jaipur, Agra (stately India, with elephants through the streets, princesses and palaces). Is this the most widespread view of India?

– Yes, North India is the most touristic part. One generally arrives at the airport in Delhi, the capital, and it is closest to the Golden Triangle, the Taj Mahal, which is a beauty, Rajasthan, which is a very characteristic province where the city of Jaipur, Varanasi, is located. It is the area where Hindi is spoken, which is the official language, but there is no national language that everyone speaks. That area is the one that shows Bollywood, which is the Indian film industry that speaks Hindi, but there are many other very important Indian film industries that speak other languages, like Kollywood with K and so many other places. But yes, it is the most touristy India, where the government is, without a doubt the epicenter, we could say.

– How did this idea so associated with India of “the internal journey” affect you during the tour?

– I am very skeptical about this idea that someone has to go to a certain place to “find themselves”. But it is true that traveling confronts you with unexpected situations. As I told you, everything I found in bookstores about India was about the soul, yoga, Ayurveda, meditation, so I was even more skeptical and it ended up happening that finally yes, I also made an internal journey because India drags you completely in his stream. There, one finds situations so different from what they are used to, with such a different organization of the world, that inevitably they begin to ask a lot about their actions. Inevitably you end up doing a journey of introspection, thinking a lot of things because the material reality is very different. And in the end, without realizing it, I was taking that introspective trip that I had underestimated so much before. India drags everyone, even if it is in different ways. And you end up getting to know each other better.

Duclós: “India is not eating more spice or praying more times a day, it is another conception of life”