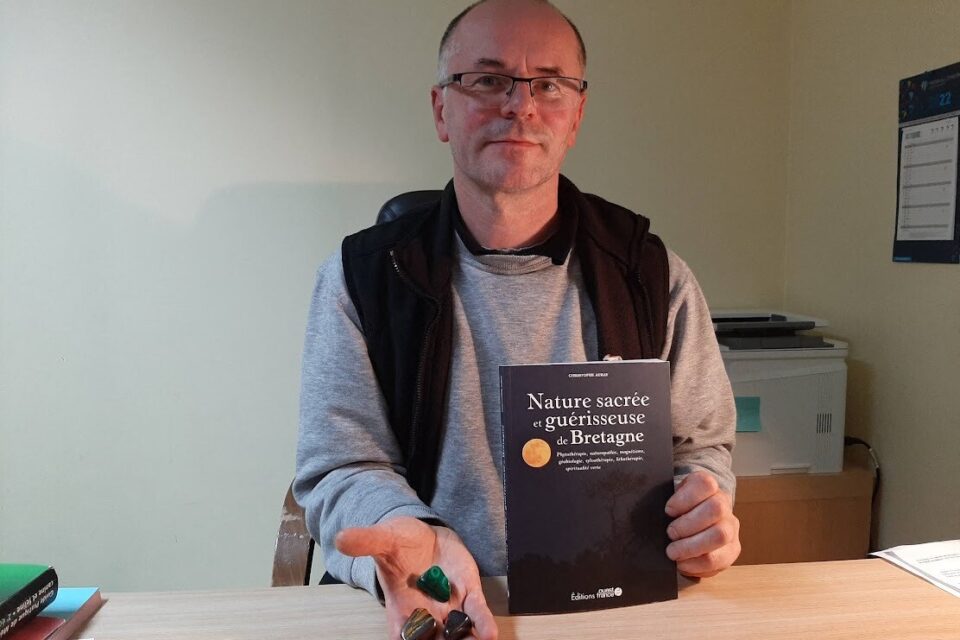 Doctor in history of science and technology, Christophe Auray collecting for more than two decades the popular traditions in Brittanywhere he exercises his trade as veterinary. He has just published Editions Ouest-France a new book titled:

“Sacred and healing nature of Brittany”.

A work in which he delivers his observations and sometimes his point of view on “new” practices in connection with movements relating to the Phytotherapy, naturopathy, magnetism, geobiology, forest therapy (consumption of birch sap) or the lithotherapy. Practices that he summarizes under the name of ” Green Spirituality. »

Without being a compilation of his previous works: “Magic and sorcery”, “Investigation of traditional remedies in Brittany”, “Weather and beliefs in Brittany”, “The herbarium of peasants, healers and sorcerers”, “Magic stones and healers” etc. this new book attempts to highlight a renewed interest in nature.

If in the relatively recent past, the presence of nature was constant in people’s daily lives, at the beginning of the 20th century, in the countryside in particular, the following generations continued to refer to plants, stars and an esoteric world. ,

The wave of Covid-19 and its consequences have revealed even more clearly the need for a return to nature.

“The Catholic religion taking less and less place in our society, people are still in search of spirituality. Knowing that nature abhors a vacuum, a large number of people find themselves today a “semblance” of God: Nature,” explains the author.

After the progress of science and technology over the past two centuries, man could have disregarded nature. Well no ! The accumulation of health and ecological crises seems to require taking the time to rethink the relationship between man and nature,

“To be sure, it suffices to consult the titles of the newspapers referring to the facilities of naturopaths, phytotherapists, lithotherapists, geobiologists…and so on. »

“But be careful,” warns the vet-writer, insisting that “one should be wary of sectarian aberrations. Far from disappearing with the advent of the modern world, popular culture is changing with the excesses that this may entail. Alternative medicines (geobiology, silvotherapy, naturopathy, etc.) refer to an energy emanating from an entire environment. »

On the paths of the sacred

Some people in contact with nature seem to discover a sensitivity, a knowledge that they intend to share: encounters that can lead to the paths of the sacred! From there, a new spirituality seems to take hold. It is based in particular on various fields including that of plants and their ability to heal, essential oils, vegetarian food. Yesterday’s practices (botanical gardens around castles, abbeys), revisited today, and giving rise to a certain green spirituality.

Referring to an Ifop study, Christophe Auray points to the fact that today, “69¨% of young people aged 18 to 24 believe in astrology, clairvoyance and witchcraft. 40% of people under 35 would adhere to witchcraft. We thought it was old beliefs! Well no, it’s there, very present, ”supports the author.

And the devil then?

Green spirituality is thus characterized as a “religion” which is set up in connection, with a real sacralization of nature,

The author is already thinking about the theme of his next book. “If nature becomes God, where is the Devil? He is there and would send testimonies of his presence: devastating fires, climate change, storms etc. Wouldn’t these be diabolical manifestations struggling with our good Mother Nature? asks Christophe Auray, already working on the subject.

Was this article helpful to you? Know that you can follow La Gazette du Center Morbihan in space My News . In one click, after registration, you will find all the news of your favorite cities and brands.

Deep Britain. “A new religion: that of green spirituality”