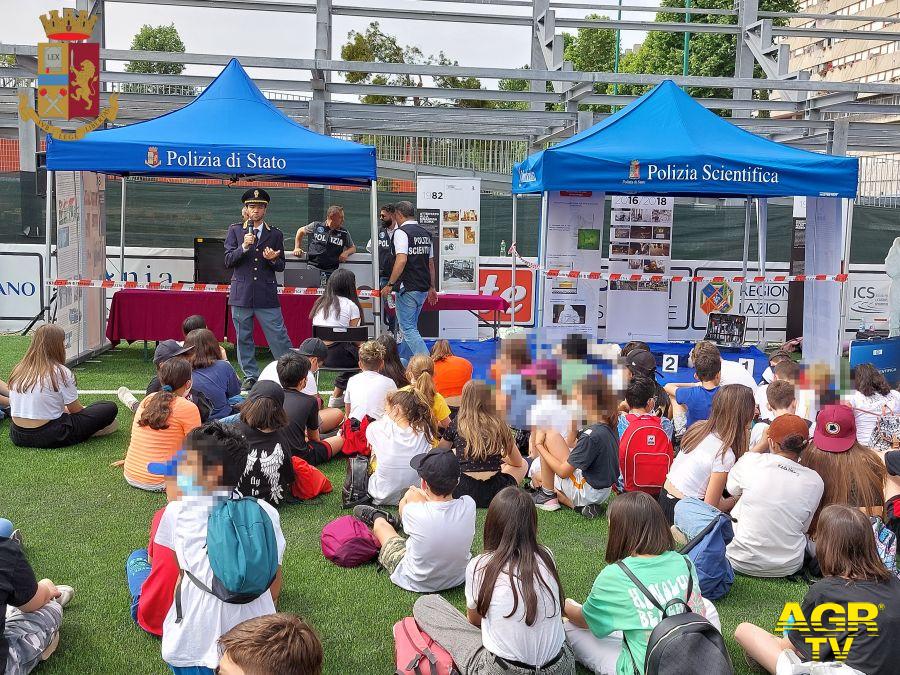 A great celebration has begun with three days of meetings, debates and concerts. 1500 school children of the XI District and other institutes were welcomed by the Police officers belonging to the XI District of San Paolo and by the Calcio sociale association to attend various demonstrations

(AGR) The first of the three days dedicated to the “Festival of Legality and Spirituality” began today in the Campo dei Miracoli of Corviale. On the occasion of the thirtieth anniversary of the “Massacre of Capaci and via “D’Amelio”, the amateur sports club “Calcio Sociale” strongly wanted to organize, together with the Rome Police Headquarters, the Observatory for legality and security of the Lazio Region and the foundation ANIA 3 days of meetings, debates and concerts.

The ceremony began with the performance of the State Police Fanfare which involved all the boys with its melodies. Many personalities took part in the initiative, including the Undersecretary of the Presidency of the Council of Ministers Franco Gabrielli, the Director General of Public Security Paolo Cortis, the Vicar of the Police Headquarters of Rome Mauro Baroni, the President of the XI Municipality Gianluca Lanzi, the President of the Lazio Region Observatory Giampiero Cioffredi, and Tina Montinaro, widow of Antonio Montinaro, Giovanni Falcone’s chief escort.

About 1,500 children from the schools belonging to the XI District and from other institutes in the capital were welcomed by agents of the State Police, in particular by those belonging to the XI District of San Paolo, and by the Social Soccer association to attend various demonstrations of the specialty of the State Police, participate in training and educational meetings and to represent their point of view.

Among the young people were the Dog Units and the UPGSP bomb squad, the River Team, the Scientific Police with full back, the Health Service, the Mobile Department, the Horse Department, the Fiamme Oro and the agents involved in the ” Safe Schools”. The “Camper Rosa” of the “This is not Love” project for the information campaign dedicated to women victims of violence took part in the event.

The agents of the Traffic Police sensitized the participants with lessons on accident prevention, attending with the “Lamborghini” and two BMW motorcycles. During the same morning, the representatives of the “Safe Schools” project held meetings in the amphitheater gym with the children present, on the subject of bullying and cyber-bullying.

An important moment of growth for everyone. The events did not end this morning and in fact, in the afternoon, there will be the presentation of the book “Joy forever”, by the State Police officer dr. Blasco Salvatore. To conclude the intense day, the football match between a representative of members of the State Police and the boys of the “Social Soccer”.

The event will also continue on tomorrow and on May 29th. Tomorrow an Association will be present in memory of the road victim “Elena Aubry”, together with a portion of the Traffic Police who will present a road accident prevention program with the aid of an interactive carpet. In addition, meetings will be held with those who frequent the elderly centers of Municipality XI, for the prevention of fraud, during which information brochures will be distributed. Don Coluccia will also be present who will meet the boys of social football and the elderly present, talking about the fight against the mafias.

In the afternoon, some operators of the State Police, specialized in judicial police activities, will meet the boys of Corviale to explain to them the activity they carry out, both in the field of the fight against drug-related crimes and in the fight against criminal organizations generally.

On Sunday however, with a celebration that will begin at 9.30, all the people who gave their lives for peace and justice will be remembered. Followed by a meeting with the policeman rapper Revman. The closure of the event is entrusted to the Calciosociale match for legality.

Corviale, the Festival of legality and spirituality in the Campo dei Miracoli

The best places to watch the highest waves in the world
Asti, conferred honorary citizenship on Pope Francis
A small selection of outing ideas across the Lot
Tweet
Share
Share
Pin