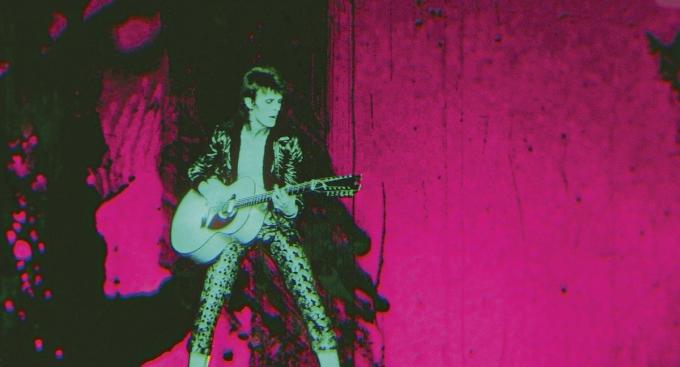 the musical documentary is doing well. New demo with Moonage Daydreamby Brett Morgen, diving kaleidoscopic in the universe and the career of david bowie.

That rock and cinema have more than acquaintances is certainly not a scoop, illustrated by the number of films that the second continues to devote to the first. The rock film has become a genre in its own right, whether it comes in the form of more or less biographical essays –Velvet Goldminesummoning the shadow of David Bowie, Lou Reed and Iggy Pop in front of the camera of Todd Haynes, I’m Not Thereseeing this same Haynes attempt a diffracted portrait of Bob Dylan, or even last daysby Gus Van Sant, revisiting the last hours of Kurt Cobain-, or biopics with variable geometry, in a spectrum that can go from the clever mirror game orchestrated around Brian Wilson by Bill Pohlad in Love & Mercyto the lush film that Baz Luhrmann recently devoted to Elvis. Without forgetting the musical documentary which, for a long time intended for the “happy few” – with rare exceptions, like Woodstock by Michael Wadleigh, or The Last Waltz by Martin Scorsese- has largely gained in visibility in recent years, flooding cinema screens as well as those of platforms elsewhere.

Moonage Daydreamby Brett Morgen (who is not at his first attempt, he who signed in 2015 Cobain: Montage of Heckone of the docus devoted to the leader of Nirvana, which had preceded three years earlier Crossfire Hurricane, made for the 50th birthday of the Rolling Stones), has thus been added to a body of work that has grown steadily over the past few years, with an ever-increasing number of filmmakers following in the wake of DA Pennebaker, author in 1967 of the legendary Dont Look Backaround Dylan, before signing the no less cult Ziggy Stardust and the Spiders from Mars. Niche movies for some (Punk the Capitalon the first punk wave in Washington, for example) or resolutely mainstream for others (The Beatles: Eight Days a Weekby Ron Howard), there is something for everyone, in fact, in an eclectic film and discotheque where the Talking Heads (Stop Making Senseby Jonathan Demme) rub shoulders with the Stones (Gimme Shelter the Maysles brothers); Led Zeppelin (The Song Remains the Same by Peter Clifton and Joe Massot), Amy Winehouse (Amy by Asif Kapadia); Daniel Darc (Pieces of My Life of Marc Dufaud and Thierry Villeneuve), the Sex Pistols (The Filth and the Fury by Julian Temple).

A filmmaker and videographer fed on punk, Temple has moreover devoted a significant part of his filmography to the movement and its periphery, and to some of its most illustrious figures: Joe Strummer, frontman of Clash, in The Future Is Unwritten, Shane MacGowan, the Pogues’ toothless singer, with Crock of Gold: A Few Rounds with Shane MacGowan, or Wilko Johnson, the brilliant as well as hallucinated guitarist of Doctor Feelgood, subject of The Ecstasy of Wilko Johnson. Certainly no stranger to the massive use of rock and blues in film soundtracks, Martin Scorsese has also documented it extensively, producing for television the miniseries The Blues, of which he directed the episode Feel Like Going Homeor dedicating films to Dylan (No Direction Home) and George Harrison (Living in the Material World), when he was not filming the Stones during a concert (Shine a Light). After calling on him for the soundtrack of dead manJim Jarmusch, for his part, devoted Year of the Horse to Neil Young & The Crazy Horse, the New York filmmaker with No Wave elegance, taking over the musical documentary in 2016 with Gimme Dangerreleasing the energy of Iggy and the Stooges.

And we could continue to feed the list at will: from the filmed concert to the more or less offbeat portrait of an emblematic artist, even to the attempt to embrace a scene as a whole (DOA, by Lech Kowalski, on the punk movement, among others), there is a virtually inexhaustible windfall here. And, therefore, films of unequal interest: not everyone is called Todd Haynes -decidedly!- revisiting the history of the Velvet Underground in the electrifying film of the same name to also capture the creative effervescence of the time . Nor Andrew Dominik dedicating, six years apart, a diptych to his friend Nick Cave, One More Time with Feeling then This Much I Know to Be True accompanying the latter in the mourning following the accidental death of his son. Even, in a different register, Peter Jackson getting down to Get Back to a reference mini-series on the creative process of the Fab Four for Disney+. At the time when music was mainly consumed in streaming, there was no reason, it is true, that the platforms did not also have their share of the cake…

The man who went elsewhere

Brett Morgen devotes a kaleidoscopic documentary to David Bowie, plunging the viewer into a whirlwind of images and music. A euphoric film-trip.

Documentaries on David Bowie, there have already been many. The one dedicated to him today by the American filmmaker Brett Morgen (author in particular of Cobain: Montage of Heck) is unlike any other. First of all, by its scope: dubbed by the David Bowie Estate, the director had access to all of his collections, a windfall from which he was able to draw – the fruit of four years of work all the same – quantity of images, unpublished for some, whether personal archives, live recordings or interviews, documenting Bowie’s journey as a nomad of artistic creation, with a musical anchorage added to his forays into painting, experimental video or theater in particular. A way of remembering how much he has never stopped reinventing himself, staging himself according to his successive characters, in an approach that he does not fail to highlight throughout a film where his speech finds a setting to match.

Which also makes Moonage Daydream a singular odyssey, this is the form that Morgen adopted. Refusing the shackles of strict chronology as well as that of impossible exhaustiveness (without ever skipping the essentials), the filmmaker offers an immersive film, plunging the viewer into a whirlwind of images and music, to create a portrait kaleidoscopic of Bowie and his work, which he notes from rare incursions into the private sphere. An aesthetic bias that he affirms from the outset, the film being a visual collage where we discover Bowie invariably charismatic, and no less fascinating, whether he philosophizes on existence and ventures into spiritual territory or that he is the guest of Dick Cavett Show in a hilarious exchange; whether he talks about his itinerant life or unveils his paintings – portraits that could not be described better than remarkable -; whether it electrifies the stages or attracts the crowds. All this on a dreamy soundtrack, Space Oddity, heroes, Aladdin Sane Or other Diamond Dogs which, remixed by Tony Visconti and Paul Massey, complete the transport to a timeless elsewhere. What this essay still recounts through each of its shots, in fact, is Bowie as a man who went elsewhere, permanent exploration as a mantra to create a work of inexhaustible influence. “I had a fantastic life, I would like to relive it”, he observes. It needed a film like this, exploding the forms of musical documentary, to share it. Saluting the mutant genius of Bowie, Moonage Daydream thus succeeds in profiling itself as an extraordinary and euphoric musical film-trip. Play It Loud, as they say. Moonage Daydream DOCUMENTARY By Brett Morgen. With David Bowie. 2 h 15. Release: 14/09.8Alongside the release of Moonage Daydream, the CineFlagey, in Brussels, devotes until 02/10 a cycle to David Bowie on screen, resuming Absolute Beginners by Julien Temple, The Prestige by Christopher Nolan, Labyrinth by Jim Henson, and Velvet Goldmine by Todd Haynes