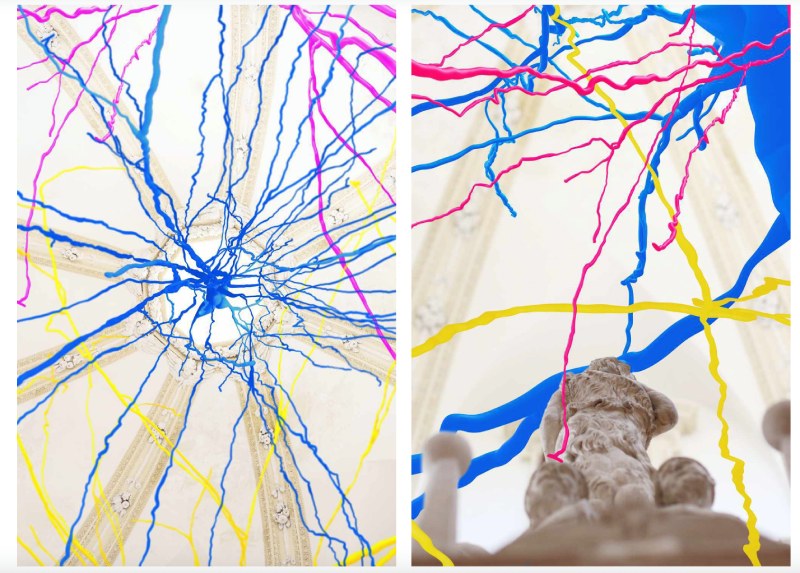 SPOLETO – Art, science, spirituality, digital culture, the encounter between human and virtual, body and technology, reality and fiction, are some of the concepts and keywords to summarize the project that Gabriele Gianni (Rome, 1978), director and screenwriter, he created for the Carla Fendi Foundation, on the occasion of the 65th edition of the Festival dei Due Mondi.

The metaverse invades what was once a sacred place
Reality? this is the title of the project carried out inside the Baptistery of the Manna D’Oro, which – explains the director – “stems from the desire to urge the visitor to ask himself what reality actually is. Are we sure, in fact, that it is not also an illusion? The work does not intend to give answers, but rather to ask this universal question, using technology in the most disturbing and alienating way “.

It is therefore a work developed through an immersive installation and the return of an enveloping space where you can let yourself be carried away by not only and exclusively visual suggestions. A work that, starting from a physical space, from a material dimension, using augmented reality, stimulates different perceptive modalities. A work that probes the objective external reality and then sinks into the subjective interior dimension, the one that opens up the “virtually” infinite space of the unconscious and conscience.

“The place – says Gianni – was proposed by the Foundation. It is a space that emanates sacredness and stimulates reflection and introspection. The installation is a mixed reality, in which the viewers become a filter between the visitor and reality. The idea is to investigate the theme of consciousness. Inside the Manna the visitor walks among the architectures, but comes into contact with suspended three-dimensional structures, or scanned human neurons, millions of times larger than reality. In fact, neurons are considered the center of consciousness ”. “The spectator / visitor – specifies the artist – can interact with them. And, if touched, they release sound messages, memories, voices, thoughts “.

The visitor will end his “augmented” experience with a symbolic gesture, ie placing his hands on the baptismal font placed in the center of the octagonal church. At that point the reality of the Manna d’Oro will change engulfed by a virtual darkness.

There is therefore a level of spatial interaction, a game of interpenetrations that somehow disrupts the space-time coordinates, resembling a stream of consciousness that opens a window onto another dimension, questioning the idea of ​​”where we is found”. A displacement that becomes an opportunity to question oneself and also to “reset” the usual habits of perception.

An ambitious, visionary work, a highly technological work, enigmatically evocative, but at the same time poetic and suggestive. A research, that of Gianni, on the border between art and technology, between past and future, which perhaps also allows us to hypothesize how technologies could re-shape our unconscious in the very near future. “I would like – says the artist – that virtual technology was not just gaming, but also a means to explore a more philosophical and introspective dimension”.

A consolidated collaboration with the Foundation
Gabriele Gianni’s relationship with the Carla Fendi Foundation is a consolidated relationship over time. The first collaboration dates back to 2018 when the director made a documentary entitled A Sense of Wonder, dedicated to the English researcher Stephen Hawking (1942 -2018), who died shortly before the completion of the short film. A documentary that – as the director explains – “has turned into a tribute to the scientist”. “A film – he further specifies – which involved not only the collection of documentary material, thoughts, excerpts from conferences, but also a real work of animation”.

Subsequently, again for the Foundation, Gianni makes Ecce Robot, a documentary this time entirely dedicated to artificial intelligence and robotics. Therefore, always in line with the Foundation’s commitment to solicit a close dialogue between art, science and technology. Ecce Robot is inspired by “some very interesting theories of the Swedish philosopher Nick Bostrom on the simulation of reality”. However, Gianni points out, that work was also an opportunity to approach a more “humanistic” and existential theme, namely that of conscience. “A concept on which we are all inclined to reflect and ask ourselves questions”, also taken up in Reality ?.

Last year, on the occasion of the 64th edition of the Festival dei Due Mondi, the director, after the Covid break, tried his hand at two documentaries: Notes on Stone and About Sol, dedicated respectively to the sculptress Anna Mahler and Sol Lewitt. Two works that, albeit documentary, allow the viewer to immerse themselves in the stream of consciousness of the two leading artists.

Director / screenwriter or artist / artisan of language
Overall, the research carried out by Gianni is therefore rather complex. In fact, he is articulated by also leveraging that dichotomy between the material dimension and more introspective needs capable of elevating the spirit above it.

In his work, as he himself explains, different cultural references and languages ​​converge, primarily the cinematographic one. “I have a great passion for David Linch, but also for Cronenberg. As far as art is concerned, the documentary made on Sol Lewitt allowed me to get close to an artist, as well as a great humility, also an infinite capacity for research and mysticism. Another director / artist of reference is certainly Steve McQueen. For me – he points out – there is not a great distinction between documentary research or fiction cinema, they are not so distant territories “.

“My work – adds Gianni – has a very particular shape, at times I feel a bit like an artisan of language. I can make classic documentaries (just now I have finished one on the concept of time), but I can also try my hand at animation, in the deconstruction of the image, which is then part of my training. My desire – he concludes – is however always to reach and propose an immersion in the story, to be achieved through the virtualization of a space, or through a more tested medium, such as that of the documentary or fictional cinema in general “.

Finally, in the future of Gabriele Gianni, there are several projects in the pipeline. “I’m writing a fiction film with a screenwriter named Marco Saura and working on a documentary on Australian history, titled ‘Sand Roads’, with another director named Lorenzo Conte, which should go into production soon, despite the fact that have been slowdowns. Then I hope to continue to experiment on the core theme of the Carla Fendi Foundation, that is art and science “.

A place called music, that place known and unknown at the same time
The 5 scariest horror movies ever for a creepy night
Verdone turns on "The lights of the city" And D'Emilio teaches cinema to children
Tweet
Share
Share
Pin