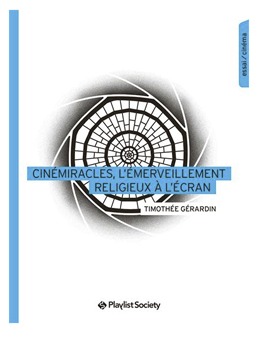 Cinémiracles, religious wonder on screen
Miracles by the Thousands

A work that would have been greatly appreciated by the great French-speaking specialists in the spiritual approach to cinema in the 1950s and 1960s, such as André Bazin, Henry Agel, Amedee Ayfre Where Michel Esteve. Timothée Gerardin looks, meanwhile, at the representation of miracles and various related phenomena in films, from the origins (The Temptation of Saint Anthony1898, and Christ walking on the waves of Georges Méliès1899) until today (The Appearance, Xavier Giannoli, 2018; series Messiah, Michael Petroni, 2020). After having precisely defined all the fundamental concepts: miracles, mysteries, wonders…, the author immediately tackles the films that have imposed themselves in the Western imagination, either by their spectacular production (The ten Commandments, Cecil B. De Mille1923 and 1955), or by their spiritual power (Ordet, Carl Theodor Dreiser, 1956). Then, it is to the “signs of the divine nature of Christ” (p.43) that he devotes himself in the films which were directly devoted to the father of Christianity, such as The King of Kings (De Mille1927; Nicholas Ray1961), The Greatest Story Ever Told (george stevens1965), The Gospel According to Saint Matthew (Pier Paolo Pasolini1964), jesus of nazareth (Franco Zeffirelli1977, TV) or The Last Temptation of Christ (Martin Scorsese1988), as well as in the modernized symbolic version of Denys Arcand, Jesus of Montreal (1989). Films where the miracles are directly visualized or only suggested, even signified in an often singular way. Gérardin does not omit to address immediately after “the work of the devil”, considered as “God’s part” (p.51), since the latter did not hesitate to impose the presence of the Tempter on his son , a presence that Nikos Kazantzakis, Paul Schrader and Martin Scorsese insisted on in The Last Temptation (of Christ). Then, in the wake of this evil consideration, the author does not hesitate either to treat the crime as an “inverted miracle” (p.56), as proven to us by Rashomon (Akira Kurosawa1950), The source (Ingmar Bergman1960) and especially Under Satan’s Sun (Maurice Pialat1987) or, even more profoundly, through the phenomenon of possession, which has not ceased to be represented since Day of wrath of Dreyer (1943), as in The Exorcist (William Friedkin1973) or Possession (Andrzej Zulawskinineteen eighty one).
The work is not limited to the evocation of these paranormal characteristics or behaviors, directly taken from the biblical writings, but also includes the different ways in which the filmmakers visualized the apparitions of several saints, such as those of Saint Catherine of Alexandria or of the Archangel Saint Michael in the eyes of Joan of Arc in the films of Georges Méliès (Jeanne D’Arc1900) or Bruno Dumont (Jeannette, the childhood of Joan of Arc, 2017). But, as for Jesus, Timothée Gérardin then imposes a denunciatory reverse shot with the evocation of the demystifying films of a Jean-Pierre Mocky (The Miraculous1987) or a yves robert via Marcel Ayme (Clerambard, 1969). Antagonistic gazes that logically lead the author, in all analytical honesty, to mention films that value doubt, such as Nazarin of Luis Bunuel (1959), Communicants of Bergman (1963) or even Mass is over of Nanni Moretti (1985). And, anxious to be as exhaustive as possible, it then brings together films that deal with quasi-surrealist miracles such as Theorem (Pasolini1968) or simply the more ordinary ones like Life is Beautiful of Frank Capra (1946), as well as those who stage a cinematographic deus ex machina, such as the invisible divine intervention of bad lieutenant (Abel Ferrara1992), the appearance “between dream and reality (p.135) specific to Pony (Jacques Doillon1996) or pure chance that underlies several films by Krzysztof Kieślowskiof which, of course, Chance in 1987. We could not be more complete on the subject and more questioning towards the reader.

Making the difference between an exercise in listening to the spirit of the times and an exercise in...
Omar Pedrini in concerto: "Viaggio senza vento mi ha salvato la vita". E annuncia l'uscita di un fum...
In Sesto Calende a week of Lenten spiritual exercises
Tweet
Share
Share
Pin