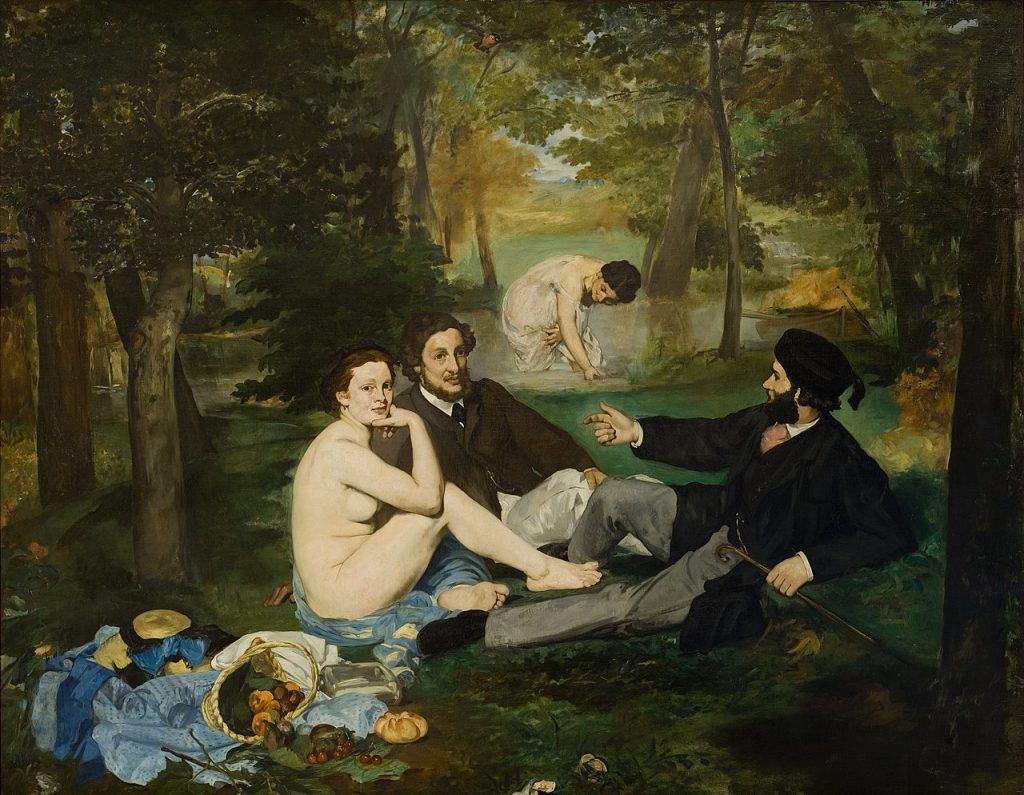 In it was about reality and television where is it modesty does not exist and love is portrayed as exhibited sex under the spotlights and the cameras behind which there are – it is good to remember – the eyes of strangers to capture what other eyes will see, those of a large audience voyeurkisses that are exchanged between men and women as if they were stickers. Today the love shown on television is mere trivial exhibitionism with no other purpose than to show and show themselves.

“I need triviality […] to defend myself from spirituality “

Read also -> Relational Consumerism: We don’t love people anymore, we use them

There art history has always dealt with modesty the man-woman relationship, so much so that when Édouard Manet exhibited at the 1863 Paris Salon Breakfast on the grassso shocking for those times that Napoleon III decided to establish a Salon des Refuséswhere the work of Manet was confined, which had outraged the right-thinking bourgeoisie for the presence of the nude woman painted in the center in the company of two well-dressed gentlemen, and they accused the whole picture of a scandalous “indecency”. With the stone of scandal, works by Claude Monet, Camille Pissarro, James Whistler were exhibited.

Still in 1913, Marcel Duchamp scandalized theArmory Showexposing his Nude coming down the stairsguilty of dynamizing the nudes, hitherto always portrayed lying down or in any case static, just like Manet’s women.

The situation did not change in Nazi Germany where the works – some bordering on pornography – by mainly German Expressionists were exhibited at theEntartete Kunst (Degenerate art).

After these first customs clearances, the seventh art shared the same fate: today we have completely forgotten the movie poetry how Hiroshima mon amour

I meet you in remembrance of you. This city is tailor-made for love. You are made for my body. Who are you? You are killing me. I had always been hungry, hungry for infidelity, adultery, lies and death. I knew that one day we would meet, that I was waiting with limitless but calm patience. Devour me, deform me in your likeness, so that no one else, after you, does not understand the reason for so much desire. We will be alone, my love.
(Alain Resnais, Hiroshima mon amour ,, 1959)

Michelangelo Antonioni treats thelove as an astral bewildermentwhich culminates in the last 10 minutes of The eclipse. Where even the movements of the camera seem to stop, to communicate the suspension to which love obliges us in an emotionally devastating way.

I wish I didn’t love you, or love you much better
(Michelangelo Antonioni, The eclipse, 1962)

And even when some films caused scandal, this did not involve the official circuits. For instance, Beautiful during the day (1967), inspired by a modest novel by Joseph Kessel, is a film about the erotic desires of an inhibited woman but above all a surreal vision of the moral crisis of the bourgeoisie, a theme dear to the director Luis Buñuel. The work was predictably attacked for the scabrous contentand extensively censored in Italy, but it was positively received by the cinematic elite, so much so that it won the Golden Lion in Venice. Séverine, played by Catherine Deneuve, is a wealthy young woman trapped in sterile moral rigor. Her relationship with her husband is cold and detached, everyday life is banal and boring.

Pier Paolo Pasolini for the movie Theoremwas accused by a spectator of obscenity, without any foundation, the poet director shoots, between 1971 and 1974 the Trilogy of life: the Decameron he obtained 80 complaints for the presence of carnalityhowever the director will say about the Trilogy: “I made these films to indirectly criticize the present, the consumerist present that I don’t love”.

In the the eighties the vein of the trashy moviewhich great directors, such as Quentin Tarantino appreciate, but it is enough to compare them with the previous ones to understand that on an emotional level they fail to give anything to the spectators. We would not want to open a “film library of the Refused”, nor do censorship or moralism, but to raise awareness of the Beauty and Poetry of some artistic works that deal with the theme of love in a profound and delicate waylike the Danae from Titian and of Klimtfertilized while the woman slept – therefore unwilling – by Zeus descended on her in the form of a shower of gold.

And then the drift on television which overflowed the trash from the banks. There public reaction? Applause and exaltation of the most vulgar because this too is love and, finally, here we are removed the yoke of religion and original sin who, once committed, has clothed us from head to toe to cover the shame.

In this depressing landscape, the roar of Titian’s golden rain returns to wet Danae in the film Body and soul by the Hungarian director Ildikó Enyediwho explained the intentions of his film, perfectly achieved, stating that the film was born:

“From the desire to talk about my vision of the human condition and our life choices … I felt the need to tell a passionate and overwhelming love story in the least passionate and spectacular way possible”.
(Ildikó Enyedi)

The first unusual features that characterize this film can be seen first and foremost in the female direction in a world that is purely masculine.

And maybe only a woman possesses the sensitivity and delicacy of soul to outline the birth of a love still as a Renaissance painter would have painted it.

Then the form chosen to tell falling in love between Endremanaging director, and Mariaresponsible for quality control in an industrial slaughterhouse on the outskirts of Budapest.

“The least passionate and spectacular possible” and, in fact: not a dirty word, not a smudge, not a nudity, the normality of the exception. The possibility of a meeting and in that meeting there sharing a daily life. Indeed Enyedi he even renounces to show the approaching bodies of the two protagonists, replacing them with those of two beautiful deer that they both dream of every night looking for each other, getting lost, smelling each other to get to know each other, drinking from the same source, just as in reality they share a lunch break.

The director must access the dream because this is really a dream love and why In reality Endre and Maria are not like the two fairytale deer: the man is mutilated in an arm and hollowed out in the face by old age and loneliness, Mária is badly tolerated at work due to her autistic behavior and because she is excessively fussy. Endre will also complain to her, for this attitude of her that makes her classify the slaughterhouse garments as level B, while for him it is top quality meat. In addition to her completely asocial behavior, Maria also shows a weird aspect: with her very blond hair and a sick pallor from which two doe eyes emerge, she almost looks like an alien, she is, in fact, stranger to the world. She does not know what music she likes, nor what physical contact is, but after her dream encounters with the deer Endre with a vigorous body and horns climbing the snowy air, she tries to learn by going to the psychologist who followed her in childhood, stage in which it has stood still in reality.

I was beautiful, yes, and I would also have had my eyes blond, but poor in money, cards, tarot cards on the street.
(Stefano Vergani, I was beautiful)

Read also -> Soul Mate: When It Feels At Home

When the psychologist Klára arrives at the slaughterhouse to investigate the personalities of the workers in order to find the culprit of a theft from the inventory, Endre and Mária both report the same dream: a pair of deer, male and female, in a silent and snowy forest, Klára assumes that they are making fun of her. Having learned of the strange coincidence, although initially skeptical, Endre and Mária decide not to ignore the intimacy that binds them in their dreams and, although Mária’s disturbed behavior temporarily alienates Endre, they eventually form a close bond overcoming the difficulty of to recreate in reality the intimate and tender relationship of the dreamed deer. Until their solitudes make the first attempts to unite in order not to be alone anymore, but to be one.

Do you think you can live alone? Always alone?
No, I don’t think it’s possible. It is absurd to live alone. Precisely for what I said before, that you need tenderness, otherwise you have to shoot yourself. Look into my eyes. If one day I told you I could love you, would you be happy? Sure I would.
(Jean-Luc Godard, The male and the female – Masculin, féminin).

“If I took a wing and felt it

in sleep, in wakefulness, in the morning

because between the true and the false not an eye

it can hold back the biped or the camel “

The director increases the dose, with the contrast between the two beautiful free deer and the cattle locked up waiting to be slaughtered.

The butcher is typically expressionist iconography to depict wealthy oppressors who establish relationships with women based on pure physicalitysuggest the image of rude grumpy pigs wielding pieces of meat with both hands.