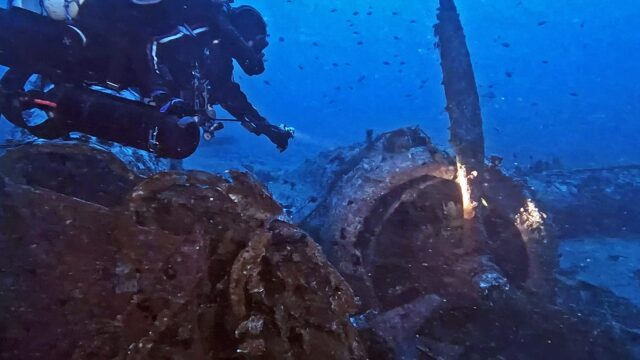 The presenter visits one of the islands that belongs to the Pelagie archipelago. Focus also on the Martin Baltimore plane wreck.

Saturday 22 October new appointment of Blue Linewith Donatella Bianchi flanked by Fabio Gallo. The appointment is, as usual, at 14:00 on Rai 1.

Seven days ago the presenter was in Capo Rizzuto, In Calabria. In today’s episode, however, he moves to Sicily to patrol Linosa, which belongs to the archipelago of Pelagie Islands.

In the episode of 22 October Donatella Bianchi comes to Linosa, which belongs to the Pelagie Islands, in Sicily. I count about 430 inhabitants. Tourists can stroll in the town made up of numerous colored houses, which take on a square shape. They alternate between small shops and restaurants.

There are no particular monuments or museum structures. However, visitors can also admire the three mountain peaks of Linosa: Monte Vulcano, Monte Rosso and Monte Nero. The peculiarity is that they do not reach a high height, just think that the highest reaches about 200 meters. Mount Vulcano can be reached on foot by walking along an easy path, which even the less experienced can take. All immersed in a rich vegetation.

The presenter tells viewers how it is possible to return to Linosa after many years, immersing oneself in an atmosphere reminiscent of the fifties. Through values ​​of authenticity and beauty, visitors do not feel like guests but as an integral part of a community.

In today’s episode, Donatella Bianchi also deals with the marine fauna and flora present in the area. Focus also on the beaches. The most famous is Cala Pozzolana Di Ponente, which is located on the slopes of Mount Nero. On this beach they come to lay their eggs Loggerhead turtleswho consider it an ideal place to leave them safe waiting for them to hatch, letting the little ones come into the world.

In the oasis of diversity it is possible to admire groups of barracuda, parrot fish And amberjacks which belong to the trevally family. To explore the beaches, boat trips are organized daily by local tour operators.

The presenter, however, also focuses attention on the wreck Martin Baltimore, British aircraft dating from the Second World War. Sunk 80 years ago, it was found about 85 meters deep. It had taken off on June 15, 1942, at 12.45, from Luqa airport in Malta. His job was to observe ship traffic in the Pantelleria area.

Fabio Gallo this week instead it is in The Island of Gorgonain the Ligurian Sea. It is the last island in our territory to be used as a prison. It is the branch office of the Livorno Prison. The peculiarity is that the prisoners are involved in the cultivation of grapes and the production of wine.

"The cycle of the earthly life of our brother Nioussire Kalala Omutunde has come to an end" By Le Sh...
The trick to see dozens of hidden movies and series on Netflix
Giorgia Meloni, her sister Arianna: «You and I are one person. When we fought over a boy ... "
Tweet
Share
Share
Pin