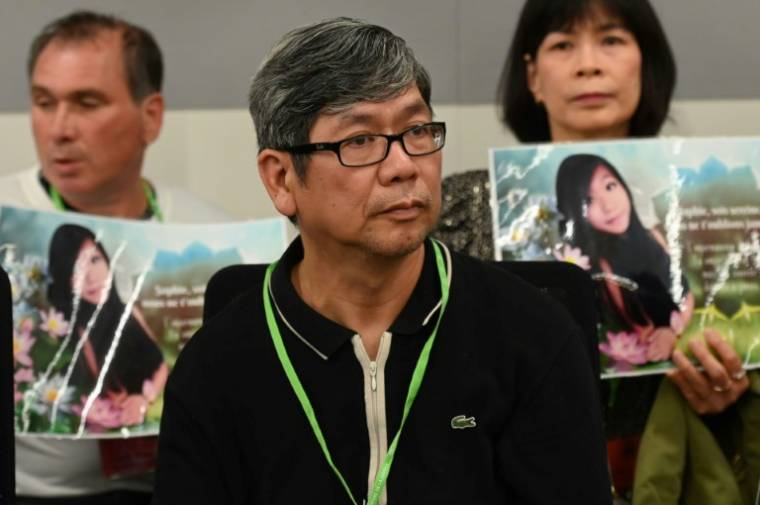 Sophie Le Tan’s father, Tan Tri, at the Strasbourg court where the trial of Jean-Marc Reiser, the alleged murderer of his daughter, opens on June 27, 2022 (AFP / Frederick FLORIN)

On the first day of his trial on Monday before the Bas-Rhin assizes, Jean-Marc Reiser, alleged assassin of Sophie Le Tan, persisted: he never wished for the death of the 20-year-old student, repeated, l detached air, the one who took more than two years to confess to having killed the young woman and thrown her dismembered corpse into the forest.

Mask on his nose, the 61-year-old accused took his place shortly after 2:00 p.m. in the accused’s box, wearing a green T-shirt.

A sign of the tension that then reigned in the courtroom, Sophie Le Tan’s mother broke down in tears at the sight of the accused. Unable to stand on her feet, she had to be evacuated by rescuers. She was unable to return to the courtroom, leaving Sophie Le Tan’s father, little brother, uncles, aunts and cousins ​​to deal with the student’s alleged killer.

“When she saw Jean-Marc Reiser, it was unbearable, she was on the verge of fainting,” said Laurent Tran, Sophie’s cousin, at the end of the hearing.

“Will you answer Mr. Reiser’s questions?” Insisted, in a firm voice, one of his lawyers, Me Francis Metzger, at the start of the hearing, relaying a request from President Antoine Giessenhoffer.

“Yes I will answer the questions as much as I can,” he replied, in a dull, emotionless voice.

After reading the summary of a two and a half year investigation, Jean-Marc Reiser confirmed that he had “recognized” and “explained the facts”. “There was no homicidal intent on my part, I dispute the premeditation,” he insisted.

“It’s his truth, he won’t change it,” warned one of his lawyers, Me Francis Metzger.

Several announced witnesses were excused, including the mother of the accused, 84 years old. Several of his hearings by the investigators were read at the hearing which was attended by a large audience. To the police, she painted the portrait of a “good son” Reiser whom she “never saw violent” and who “never hurt the girls”.

At home, “there were often arguments” with their father, whose alcoholism Jean-Marc “could not stand”, nuanced the young sister of the accused, Christiane. To the police, she had said: “If it’s him, it’s a monster”. “He must answer for his actions. We, the family, suffer,” she said at the bar.

“I did not perceive at any time a dangerousness in him”, recognized Pierre Villemin, who had known Reiser at the Restos du Coeur. Describes him as a “benevolent, respectful” man, sometimes a “bit awkward” or “surly” and capable of being “cavalry” with women.

Prison visitor Françoise Emilli met Reiser when he was detained in Besançon more than twenty years ago, before his conviction for two rapes. She remembers a “brilliant, intelligent, cultured, calm, composed man” who was interested in “philosophy” and “Oriental spirituality”.

“It’s Dr Jekyll and Mr Hyde: yes he is intelligent, charming and cultured” but “he lies about everything, he betrays everyone”, stormed after the hearing Me Gérard Welzer, the lawyer for Sophie’s relatives .

Sophie Le Tan’s mother is comforted by the family’s lawyer, Me Gerard Welzer, before the start of the trial of the alleged murderer of the young student, Jean-Marc Reiser, on June 27, 2022 in Strasbourg (AFP / Frederick guilder)

“We have to humanize the character and get him out of this idea that he was a monster”, opposed one of Mr. Reiser’s advisers, Me Pierre Giuriato.

Assassination with a carefully prepared trap? Or, as Mr. Reiser maintains, murder in anger after refused advances?

The jurors, four men and two women, will have until July 5 to try to understand what happened on September 7, 2018 in Schiltigheim, a municipality bordering Strasbourg.

Sophie Le Tan disappeared on her twentieth birthday, after going to an apartment visit.

Quickly, the investigators went back to Jean-Marc Reiser, already convicted of rape in 2003 and acquitted for lack of evidence in another case of disappearance in 2001.

Significant traces of carefully erased blood are discovered at his home and the DNA of the victim on a saw in his cellar.

After more than two years of denial and fluctuating versions, he finally confessed in January 2021, more than a year after the discovery of the incomplete skeleton of the student in the forest in October 2019.

Jean-Marc Reiser will be questioned on the merits of the case on Friday. He faces life imprisonment.

At the start of his trial, Reiser denies always having wanted to kill Sophie Le Tan