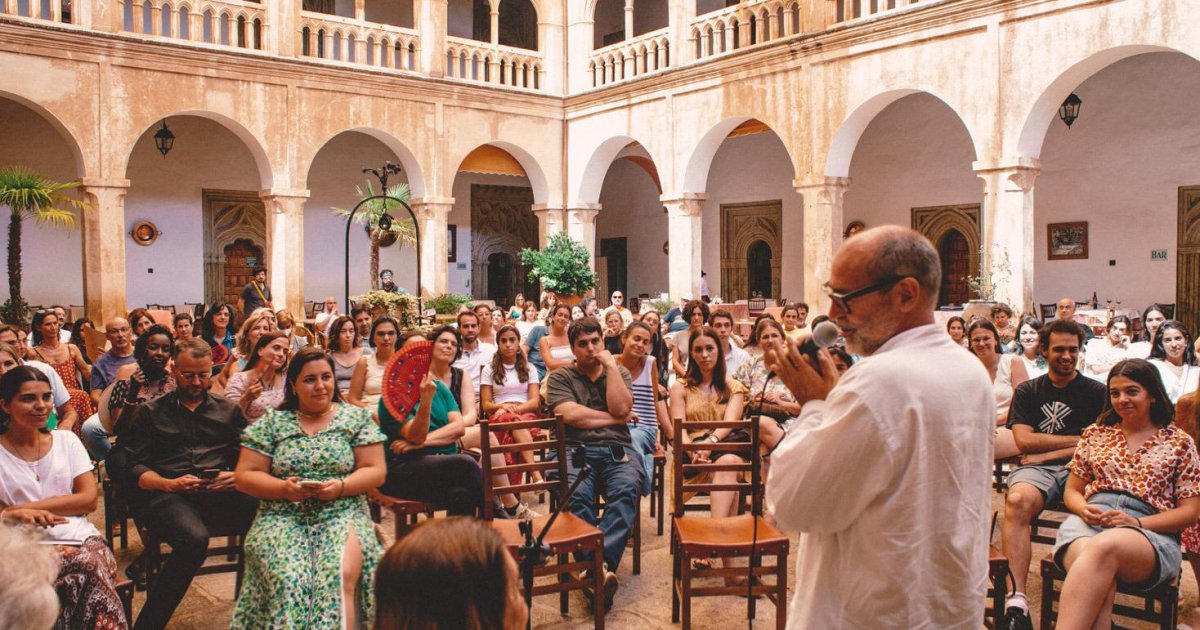 Dawn in the Monastery of Guadalupe (Cáceres). From the very first hour, a mixture of contemplative silence, almost reverential, and an impatient ecstasy to see and experience everything that is going to take place inside a sanctuary that has almost ten centuries of history, can be appreciated. A young woman runs through the cloister, cello on her shoulder, until she reaches the oratory, presided over by a life-size Virgin in a prayerful attitude, Santa María de la Paz, seated with the rest of the attendees. Mass and adoration begin at 8, and how could it be otherwise, music, artistic expression and faith go hand in hand.

It is the second edition of Observatory of the Invisiblea summer school that tries to unite two concepts that have recently appeared unrelated: art and spirituality. For a week, attendees attend different artistic workshops in which there is always a transcendent look. Between workshop and workshop, meetings, colloquia, round tables, guided tours and forums, in which great figures from the world of art participate, such as the painter antonio lopezor of the canonical, such as the Archbishop of Toledo, Francisco Cerro Chaves.

The idea of ​​this week is not only to reflect on art and its relevance or not to introduce contemporary man on an environmental level: we must also get down to work. For this reason, the workshops are practical: seven spaces for artistic creation in which the students, who are close to a hundred this year, are guided by great figures from the artistic world.

The photography one, titled ‘Light, emotion and time’the brothers teach it Sema and Eduardo D’Acosta, who work with light as a constitutive element of photography. «We study its pictorial genealogy and its application today. The final objective is for the participants to understand that light is the key prop that contributes to enhancing the expressive force of an image, and in the practices we will be inspired by the paintings of Zurbarán and the Jerónimos painting cycle ».

«From the observation of nature, in this unique environment such as the Monastery of Guadalupe, we are going to learn to look to see. A painter has to know how to look in order to see, but we are also going to focus on being, on ourselves and on who we have in front of us, to get to know ourselves through painting». This is the painter’s proposal Elena Gonithat in the workshop ‘Know how to look to see’ He makes his students observe first and then capture the fruit of his gaze. «Educating the gaze is the first thing».

It also educates the look Izara Batres, Doctor of Literature, writer and poet. In the workshop ‘The invisible passage’ develops the creativity of his students through three perspectives: poetry, narrative and film script. «They are three different and complementary languages ​​that help us establish a dialogue with the transcendent».

In theater, the famous Joaquin Notarywho has developed a large part of his theater career within the Compañía Nacional de Teatro Clásico with works such as Life is a Dream, The Mayor of Zalamea, The Manger’s Dog, the Goblin Lady either the discreet lover, and in cinema it has been put under the command of David Trueba or Pedro Almodóvar, it seeks to bring the attendees closer to the texts, mystical texts and spiritual content in Spanish. “In ‘Scene and Soul’ We are going to understand how our theater is a mirror on the outside, but also on the inside. All this seasoned with an intense work of verse technique».

The sculpture workshop is run by Pedro QuesadaAntonio López’s assistant, and that of bookbinding and embroidery of Natalia Garcia Vilas and Yolanda Andres. Finally, in ‘For you is my music, Lord’the composer Ignacio Yepesfounding director of the Orquesta Filarmónica del Arte, of the Koiné Ensemble choral group and musical director of the international group Donaires Ensemble, approaches this workshop from the listening and choral and instrumental interpretation of his work, «to delve into the mystery of the relationship of man with God.”

The place of art in the contemporary world

«Art is not there to make the obvious visible. That’s what reality is for.” explains the sculptor and image maker Javier Viver, soul of the Observatory of the Invisible. «The invisible is precisely what art speaks about, the mystery, what cannot be spoken of, but can be contemplated. That does not mean that it is understood, but without a doubt it is a degree of direct knowledge by the presence and its figure ».

The Observatory of the Invisible is a project of the VIA Foundation, founded by a group of artists from different disciplines including the composer and conductor Ignacio Yepes, the architect Benjamín Cano, the painter María Tarruella and the sculptor Javier Viver. «We seek the promotion of art and artists through the renewal and integration of the various artistic disciplines and the research, training and exchange of experiences and knowledge»explain its founders.

“You have to communicate hope. Mainly in an old society, which is back from everything, art shows pieces of paradise, places of justice, of unexpected love, of true beauty”, adds Javier Viver. That is what happens these days in the Monastery of Guadalupe: an encounter between man and Beauty with capital letters.

Art, spirituality and communion: this is the Observatory of the Invisible