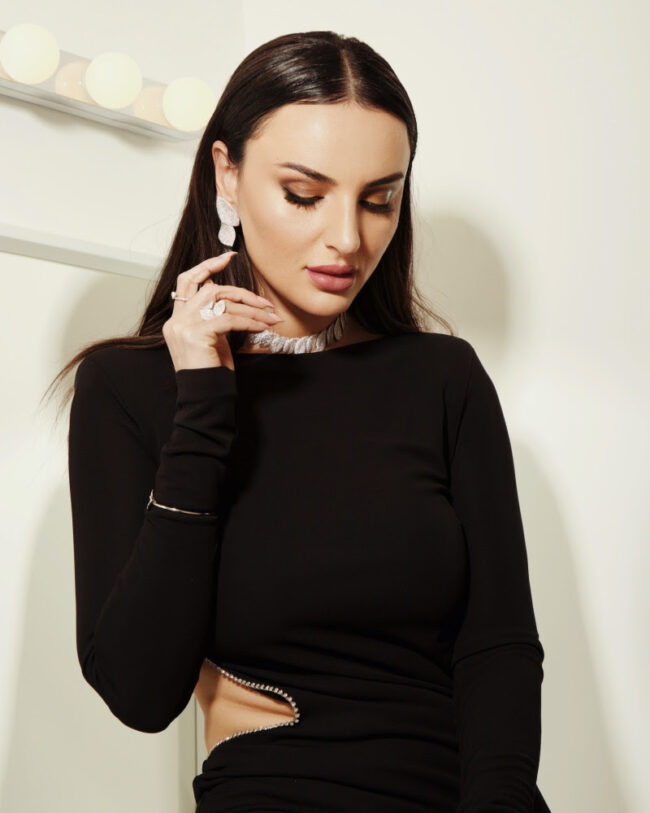 MILAN – Arisa will start on tour from 14 June with “Ero Romantica – Little Summer tour”, organized by International Music and Arts, which will lead her to sing on stages across the peninsula accompanied by Giuseppe (Gioni) Barbera on the piano and in most some dates also by Jason Rooney at the console.

In a surprising alternation between melancholy love ballads and unbridled 90s dance rhythms, vocal acrobatics and rap phrasing, Arisa will present for the first time live the new album “Ero Romantica”, a record poised between romanticism and an urgent need for freedom, carnality and spirituality, a dualism already expressed by the separation in two blocks between the wildest and most electronic songs and the slowest and most sentimental ones, as in an ideal side A and side B.

11 tracks that are an act of love towards humanity in its various facets, which celebrate femininity and its contradictions, which speak of female self-determination and voluntary slavery, shouting the need to change point of view so as not to be crushed by ‘approval. In addition to Agua de coco and there will be singles in the lineup who anticipated the album as You could have done morePsycho, Swings, Heart in addition to the hits who made Arisa known to the general public: Sincerity, Windbreak and The Night.

In the meantime, however, tomorrow, 10 June, Arisa will be the godmother of the 15th edition of the Pride Village, the great Italian LGBTQI + Festival founded by Alessandro Zan, which will attract an audience from all over the peninsula to the city of of civil rights. Arisa will go up on the main stage of the Festival, at the Padua Fair, to officially kick off the Padua event and sing her greatest hits, the songs from the latest album Ero Romantica and Agua de Coco, the song chosen as the official theme song for the Pride Village 2022, a hymn to beauty that evokes fiery summer nights.

THE FIRST DATES OF THE TOUR

FOR INFO AND TICKETS: www.internationalmusic.it.

We all remember his debut, a page in the history of music, television and pop culture in this country. It was 2009 when at the 59th edition of the Sanremo Festival, Rosalba Pippa, a young and shy girl with a 1950s look and nerd glasses, presented herself in the New proposals category. Sincerity, the song with swing hints presented on that occasion, surprised everyone for its originality and for the particular voice of its interpreter. A stamp that immediately became unmistakable for everyone, a true artistic signature. Sincerity it ranked first and also won the Mia Martini Critics’ Award and the Assomusica Award of Casa Sanremo. In the same year she was awarded as a “young revelation” by the Record Association on the occasion of the Wind Music Awards. Sincerity it was also the title of his first studio album. A star was born, one of the most original and most popular characters in the world of entertainment in Italy. She was born Arisa.

Award-winning singer, author, actress and voice actress, writer, TV host and icon of light music, yes, but often unconventional and provocative, a champion of the positive body, loved and esteemed in queer and LGBT circles, Arisa has shown in recent years that she is a 360 ° artist, always, proudly, outside the box: chameleonic, eclectic, unpredictable, constantly ready to question itself and undermine the certainties of the public and critics. From an awkward-looking young man at the beginning to the most recent image of a femme fatale in a sexy punk and bondage chic key, everything happened in the middle of her.

In over twelve years of career he collects 4 gold and 7 platinum discs and participate eleven times a Sanremo Festival: seven in the race, three as a guest and one as a presenter alongside Emma Marrone And Carlo Conti. Wins two editions: in 2009 with Sincerity among the “New proposals” and in 2014 triumphing with Against the wind in the “Champions” category. In 2012 it ranks second with The night, among his most intense certified pieces triple platinum record.

Judge for three editions from X Factorhe wrote two books and has demonstrated his musical eclecticism also through collaboration with artists as diverse as Mauro Pagani, Cristina Donà, Club Dogo, Jose Feliciano, Tricarico, Giovanni Caccamo, Enzo Gragnaniello, Fedez and J-Ax, Takagi & Ketra, MYSS KETA, Lo Stato Sociale, Tony Hadley of Spandau Ballet, Cristina D’Avena, Alberto Urso, Gigi D’Alessio. There are countless authors who have written for her but if there is anyone who has often been by her side over the years it is Giuseppe Anastasi, author of many successes of the Lucanian artist. She has released seven studio albums – Sincerity (2009), Malamorenò (2010), love me (2012), If I see you (2014), Looking the sky (2015), A new Rosalba in town (2019), I was Romantic (2021) – a live album and two collections, collecting well fourteen awards and two nominations to the Silver Ribbons.

Irresistible voice for beloved characters of animation film world-famous, he starred in five films for directors like Ricky Tognazzi, Alessandro Genovesi And Black Relatives. Among the artists most courted by Italian TV, she took part for two editions in one of the most popular Italian television programs, Friends by Maria De Filippi, while it is currently engaged as a competitor of the Rai Uno program conducted by Milly Carlucci Dancing under the stars.

Central figure of Italian song, Arisa’s fame crossed national borders when she performed at the Master Theater from New York as representative of Italy for the eleventh edition of the Italian Music Festival but also a Tokyo and in Kuwait. Everyone recognizes one rare human sensitivity about social issuestestified among other things by his commitment to i children of Haitithe candidacy to Amnesty Italy Award and participation in the concert in favor of Abruzzo citizens affected by the earthquake of 2009; in 2021 it was godmother of the Gay Pride in Naples.

Anticipated by individuals You could have done more – song written by Gigi D’Alessio and competing at the 71st edition of the Sanremo Festival – Nettle, Psyco, Swings And Heart I was Romantic and its seventh album in studio, the first released for his independent label Pipshow – under exclusive license to Believe Artist Services.

In December Arisa wins first place in the Dancing With the Stars program, together with the dancer Vito Coppola. In February he participates as a judge in the masked singer. In March 2022 she flies to Beijing to sing the Italian anthem of Mameli for the closing ceremony of the Paralympics of the Beijing Winter Games 2022. On April 4, 2022 he held a benefit concert at the Teatro Lirico in Milan in favor of the Ukrainian population, organized by the Francesca Rava Foundation to respond to the urgent requests of hospitals affected by the war.