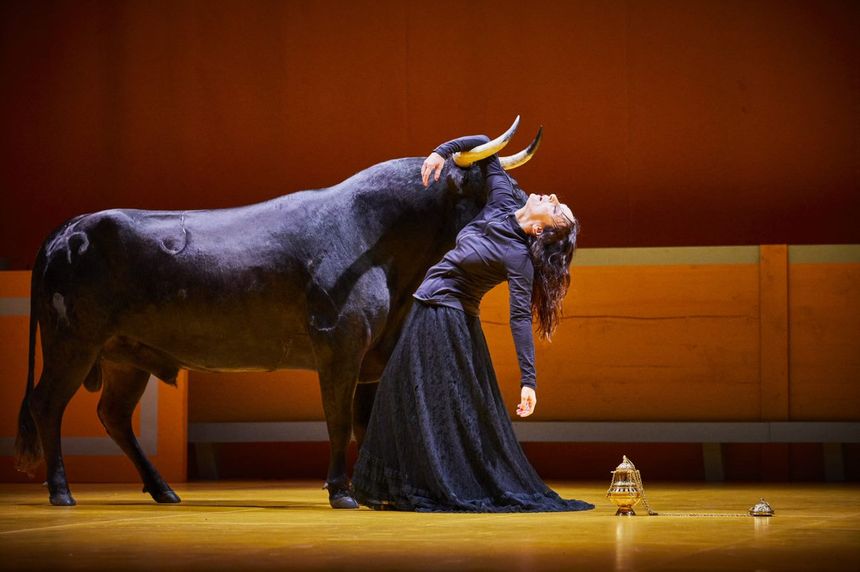 On October 27, 2021, on the occasion of the creation of two new shows, Terebrante and Liebestod [L’odeur du sang ne me quitte pas des yeux]the director, author and performer Angélica Liddell returned to Arnaud Laporte’s microphone on her working methods and her inspirations.

We discovered the cathartic theater of Angélica Liddell in 2010 in Avignon with Casa de la Fuerza and Ricardo’s Year. Since then, the Madrid radical has never ceased to challenge, upset and even scandalize with eruptive works. She dares everything and gives substance to the horror and pain of the world via her own body, often subjected on stage to harsh tests.

The dramatic gesture as survival

For Angélica Liddell, theater is both a sacrifice and a gesture of survival that responds to an imperious inner need. The daughter of a soldier raised under Francoism in Spain, she fills her solitary childhood with drama lessons and the writing of dialogue melodramas.

At the age of 13, I was writing pages and pages with a typewriter. All the characters would die. It was pure suffering for everyone. […] I had the need to die through my characters. Angelica Liddell

After studying dramatic interpretation, the Madrilenian founded the Atra Bilis company with actor Gumersindo Puche in 1993. The expression means “Black bile”, a fluid that is considered in ancient medicine as that which, coming from the spleen, causes the state of melancholy.

In a country where alternative scenes are rare, Angélica Liddell takes a little time to establish herself. His line has never changed. From his first works, the artist takes the side of confession rather than fiction and is interested in figures of monstrosity. Since her double coup in Avignon in 2010, she has never stopped pushing her limits and transcending the desire for death that has inhabited her since childhood.

During the interview, the artist takes us behind the scenes of his creative process:

I see texts from the angle of literature and poetry. […] Once the text is written, when I bring it into my mind, I correct it as I memorize it. And if the body expels certain words, certain things that I can’t manage to embody, the body itself corrects the text, cleans it up. There are words that cannot be embodied. And that, my body knows it. Angelica Liddell

Angélica Liddell is simultaneously a performer, actress, playwright, choreographer, and director, and none of the above. On stage, she is herself and cannot do otherwise. In Madre then Father that make up his diptych Una Costilla on the table presented at the Théâtre national de la Colline in 2020, the artist explored, for example, his relationship with his deceased parents, between atonement and adoration, shamelessness and the ceremony of pain.

It is through my own spiritual tension that this catharsis occurs. […] Everyone can enter this shamanic and ritual perimeter that is the stage. Angelica Liddell

Resolutely transgressive, the Madrilenian uses the stage to deconstruct herself and to question the way in which everyone adapts to the intolerable. The virulence of Angélica Liddell also comes to express her disgust with the world. His work finds great political resonance, it is a matter of “civil resistance”. The Scarlet Letter in 2019 for example denounced, not without rage, the hypocrisy and puritanism of our society while Casa de la Fuerza posed the universal question of the relationship of women to the sadism of men.

The artist returns during the interview to his sources of inspiration, in particular David Lynch:

David Lynch gives us back our dark side. […] Watching his films gave me back an enormous energy that comes from an inner world, from an irresponsible world, something that comes from madness. Angelica Liddell

Angélica Liddell: “On stage, our body is our church”