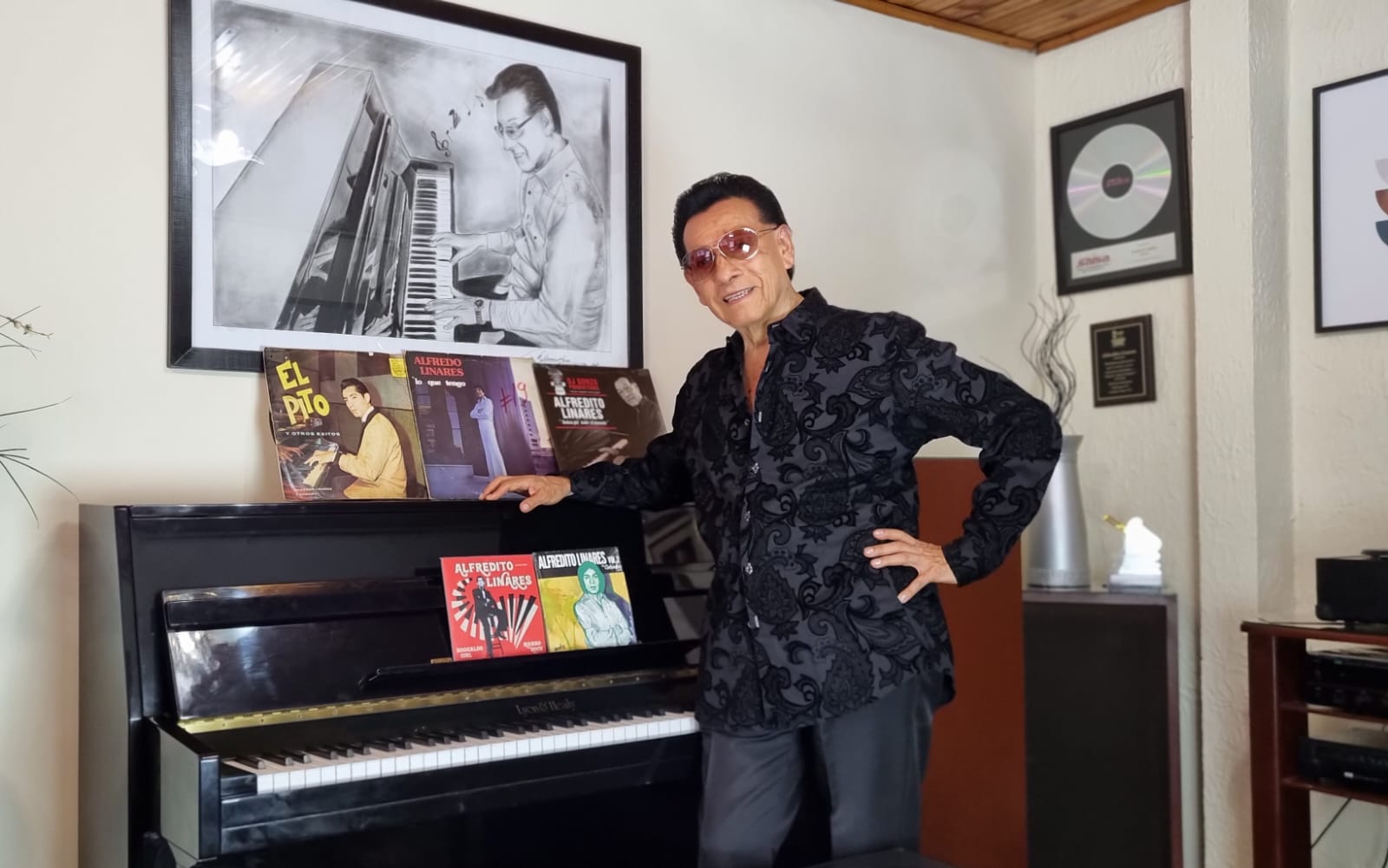 This is a space for free and independent expression that exclusively reflects the authors’ points of view and does not compromise the thinking or opinion of Las2orillas.

It was the year 1975, when the trumpets of Tito Chicoma, Baltazar Herrera and Antonio Alzamora burst in, and at the piano a slender young man with an Elvis Presley hairstyle. “This is… Alfredito Linares… and his mambo rock“, presented the wonderful Kiko Fuentes, star vocalist, and the frenetic rhythm spread in Cali, Colombia and Latin America, filtered into the dance halls of Queens, New Jersey, Manhattan and the Bronx. And it crossed the Atlantic at its own pace until it conquered Europe.

Alfredito Linares, his piano, his music, his talent. Always in his sauce.

Cali was a cauldron of red-hot salsa, an uncontrollable rumba that spread like wildfire and burned rapidly in bars and gangs of the working-class neighborhood, in the discos of the Sixth, in the downtown slums and basements, around the Hotel Aristi, on its outskirts, in lots, ranches and booths of Juanchito: ‘Agapito’, ‘Changó’, ‘Don José’, ‘El parador’, ‘El grandfather pachanguero’, where the niches arrived on Sundays, from noon, while at altars and pulpits the enraged curia condemned eternal fire ” that demonic noise of the end of the world”.

For the cassocks and the conservative elite and double standards, Richie Ray, Bobby Cruz and “his minions, they would not have a second chance on earth“, but for the common people, salsa had fallen as if from the sky, an act of redemption for all their fatigue and hardships. Not in vain, old cuartilleros and announcers like the Cuban José Pardo Llada, infected by sandunguera fever, agreed on rename the capital of the Valley as the Heaven’s branch.

From this avalanche of great orchestras and vocalists from New York, Puerto Rico, the Dominican Republic, Panama and Venezuela, the figure of the Peruvian Alfredito Linares stood out, a modest and good-mannered young man, who came from the popular upper neighborhood of Lima, son of a merchant and restorer of pianos, who in the midst of the hubbub of Cali made himself understood through the quality and virtuosity of his keyboards. 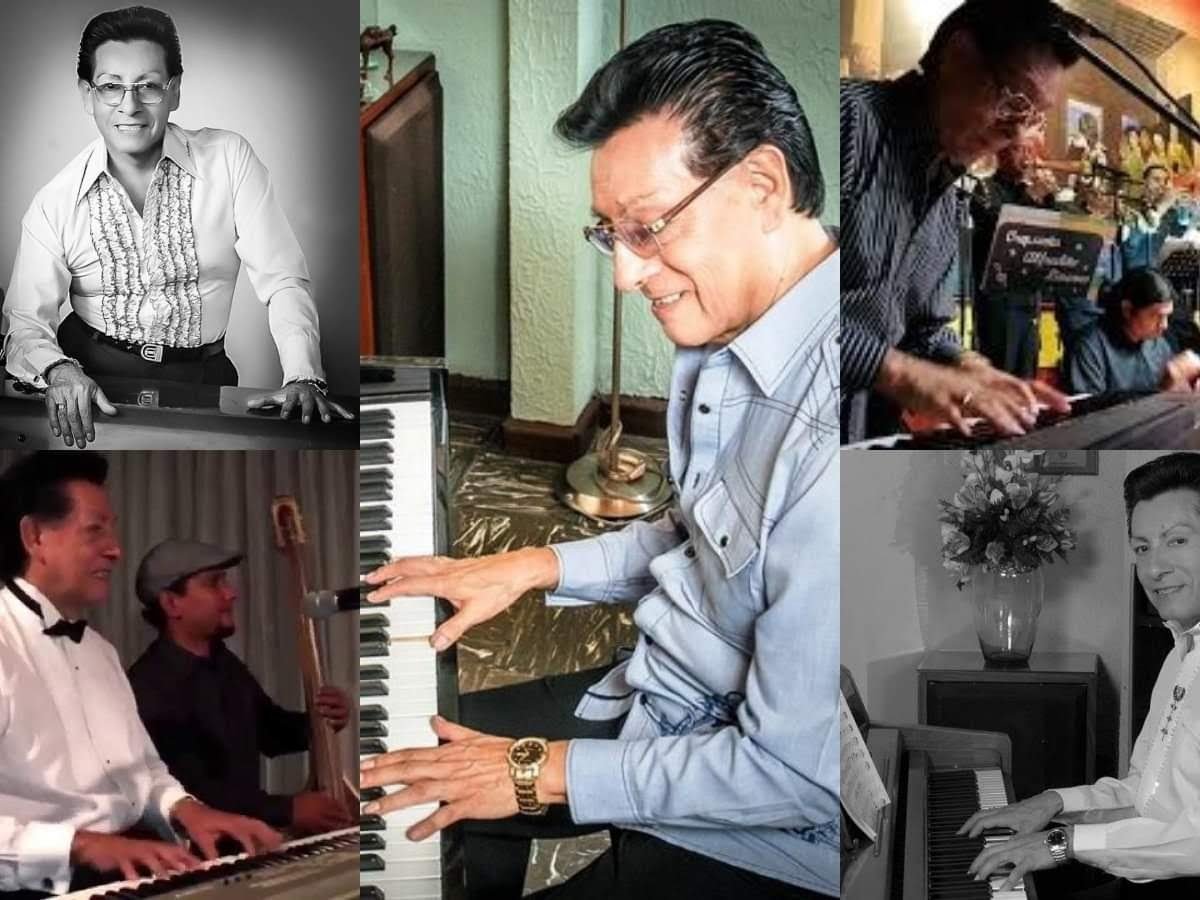 The polyphonic Alfredito Linares, with a musical work that includes 50 productions.

Like Richie Ray, the ‘witch-hands’ from the Bronx, Linares sat at the piano for five years, and he was trained according to his vocation and talent, with the rigor and discipline of a private teacherwhich along with the mathematics and grammar of the piano, gave lessons and exercises based on the complex pages of the geniuses of universal music: Bach, Beethoven, Mozart, Chopin, Schubert, Rachmaninoff, among others from that pleiad of enlightened .

Scores of the immortal creators of classical music were his academy with the piano, at home, and at the National Conservatory, where he entered when he was just emerging from adolescence, and his teaching in crescendo with the keys, he summoned the neighborhood to admire Alfredito, the precocious pianist. 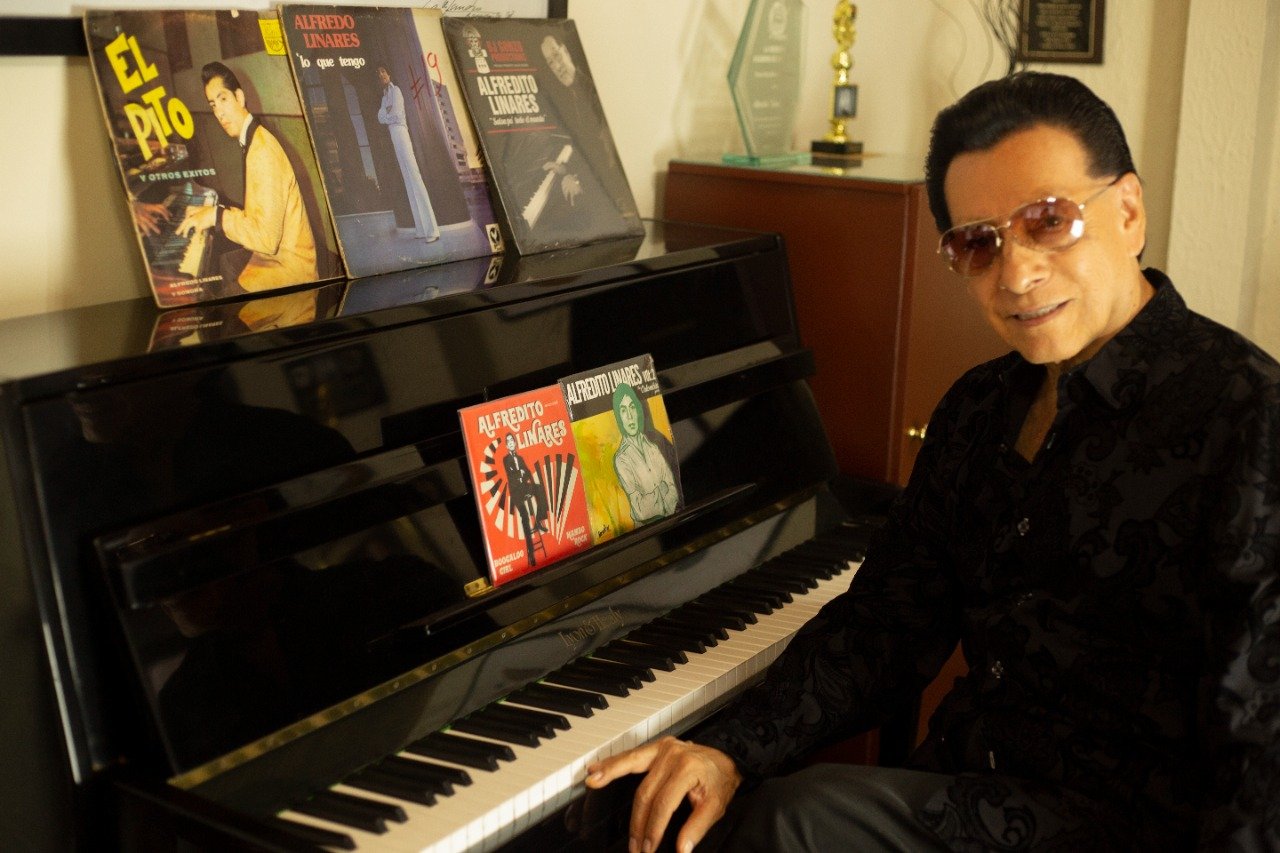 Alfredito sat down at the piano at the age of 5 and his first school was classical music.

At the age of fourteen he led his first musical group, the Linares orchestra, and began to earn his first soles at family parties and neighborhood events, and through the management of his motherand accompanied by the percussion and guitar of his brothers, he became known on stations such as Radio Victoria, and on other stations in the municipality.

Along this fruitful and diverse path of music, Alfredito Linares marked a route in the depths of jazz and the best exponents of the American jazz school: Miles Davis, John Coltrane, Charlie Parker, Óscar Peterson, Herbie Hancock, Bill Evans, Keith Jarrett, Chick Corea, the legendary Ray Charlesand in the current of famous Peruvian pianists such as Lucho Macedo, Mario Alison, Coco Lagos, Lita Branda, Peruchín and Melcochita, as well as Latin jazz and classical salsa in the prodigious hands of Bebo Valdés, the Palmieri brothers, Papo Lucca and Rafael Ithier, among others.

Linares’ piano background is grounded in the rigor and discipline of the great classical school, which he knew how to cultivate from an early age, and which throughout his seventy-year career has been the seed of his creative motivations in jazz and salsa, with fusions of folklore and Latin and American popular culture, for example ‘Mambo Rock’ and ‘Tiahuanaco’, successes by Linares with touches of rock and roll and bougainvilleawhich has inspired versions such as Fruko y sus Tesos.

Fifty productions account for a portentous and multifaceted musical work that has transcended borders as a composer, producer and arranger, with the privilege of working and alternating with orchestras and legends of tropical music such as Sonora Matancera, Daniel Santos, Celia Cruz, Yayo El Indian, Celio González, the unforgettable Nelson Pinedo, Ñico Estrada, in the romantic and bohemian era of exclusive clubs and griles of the great capitals such as Miramar, the old Gun Club and the Red Room of the Tequendama Hotel, the epicenter of social and cultural activity in Bogotá.

His transhumance with music, between presentations, tours and recordings, has taken him to cosmopolitan cities such as New York (where he lived for a while), Miami, Tokyo, Beijing, Moscow, Paris, London, Madrid, Buenos Aires, Panama City, his native Lima, and thirty years ago Caliwhere she arrived for the first time in 1973, and where she decided to stay because of the tropical enchantment that surrounds her, her people, her music, and the valley that touched her heart, Doña Isabel Moreno, decorator and pastry expert, with who shares his life in a comfortable residence in the Los Mangos Urbanization. 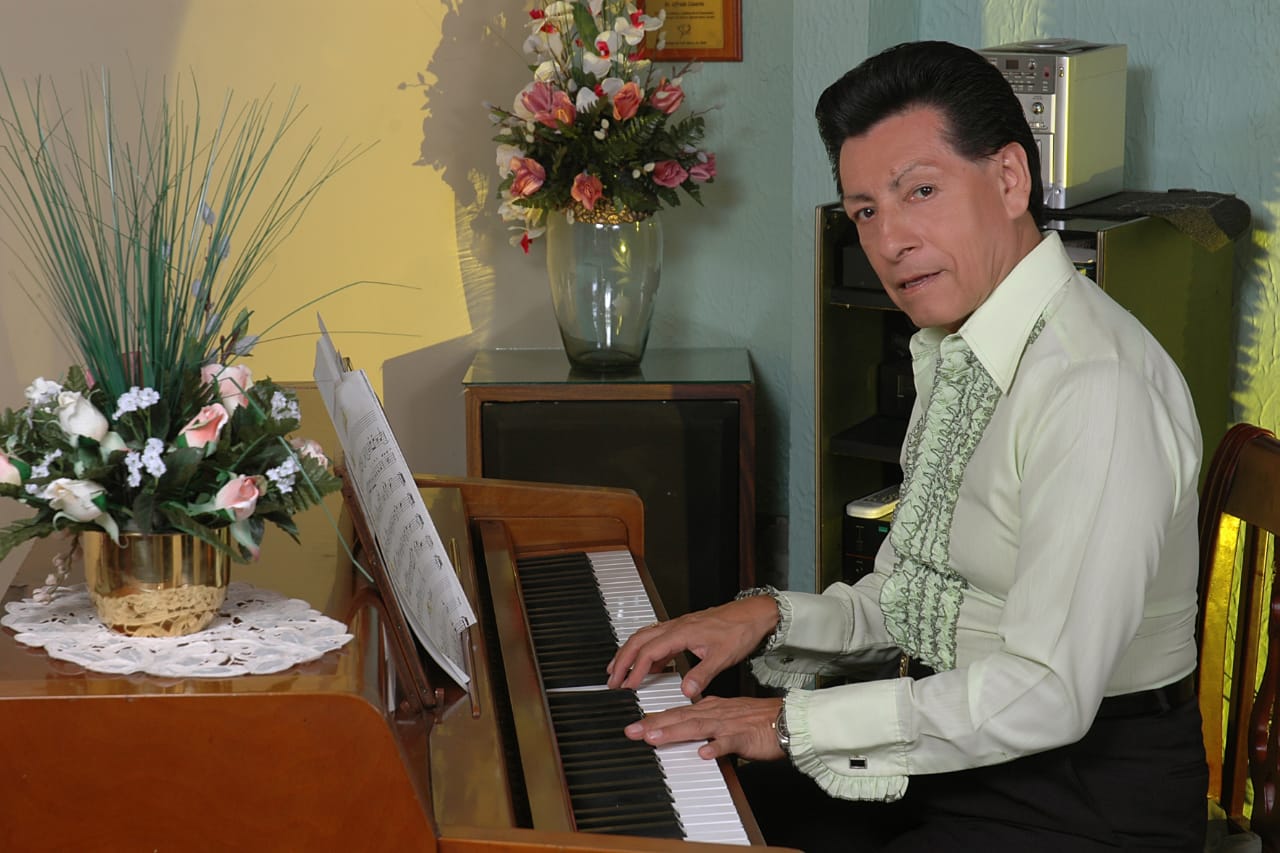 In his studio in Cali, the city where he lives with his wife for 30 years.

“I did not pay payola”

Now that his return to Bogotá is announced with a concert at Cielito Lindo, this Friday, September 30, I ask Alfredito Linares if he ringtone on his cell phone is ‘Mambo Rock’, and he replies no, it’s an ordinary one. Tercio then to reveal to him, that whoever interrogated him premiered with his ‘Mambo Rock’ the first little arrow28 years ago, 1994, when cellular telephony was inaugurated in Colombia.

But does he keep his master music? It was said that you had an admirable vinyl collection.

«’House’ of blacksmith, wooden hoe’. It is very difficult, because one as an artist is in constant movement, and what one has at hand is the suitcase and the instrument to go wherever one is called».

«I keep two: an acoustic one, Lyon Healy brand, American; and a Yamaha P 90, electronic».

How many hours do you spend on rehearsal?

What music do you like to listen to today?

«Classical, jazz, salsa, music from the Pacific, from the Caribbean, boleros, I have a production of boleros that has not yet come to light. A selection to the taste of good music lovers and collectors that includes: ‘Tú, mi delirio’ (César Portillo de la Luz’, ‘Júrame’ and ‘Quiéreme mucho’ (María Grever), ‘Cartagena’ (Adolfo Mejía), ‘Caracas’ (Billo Frómeta), ‘Imágenes’ (Frank Domínguez), performed in the voice of a talented singer from Cali like Pedro Montero»

By the way, teacher, how have you observed the salsa movement in Cali?

«It happens that in Cali we have been used to naming Niche and Guayacán as references, but there are good orchestras that have not had the media encouragement they deserve, especially on the radio, for prioritizing reggaeton. But the same people continue to fight there, Hermes Manyoma, Lucho Puerto Rico, Kike Harvey, Cali Charanga, La Ley, Kiny and La Tropa, among others. 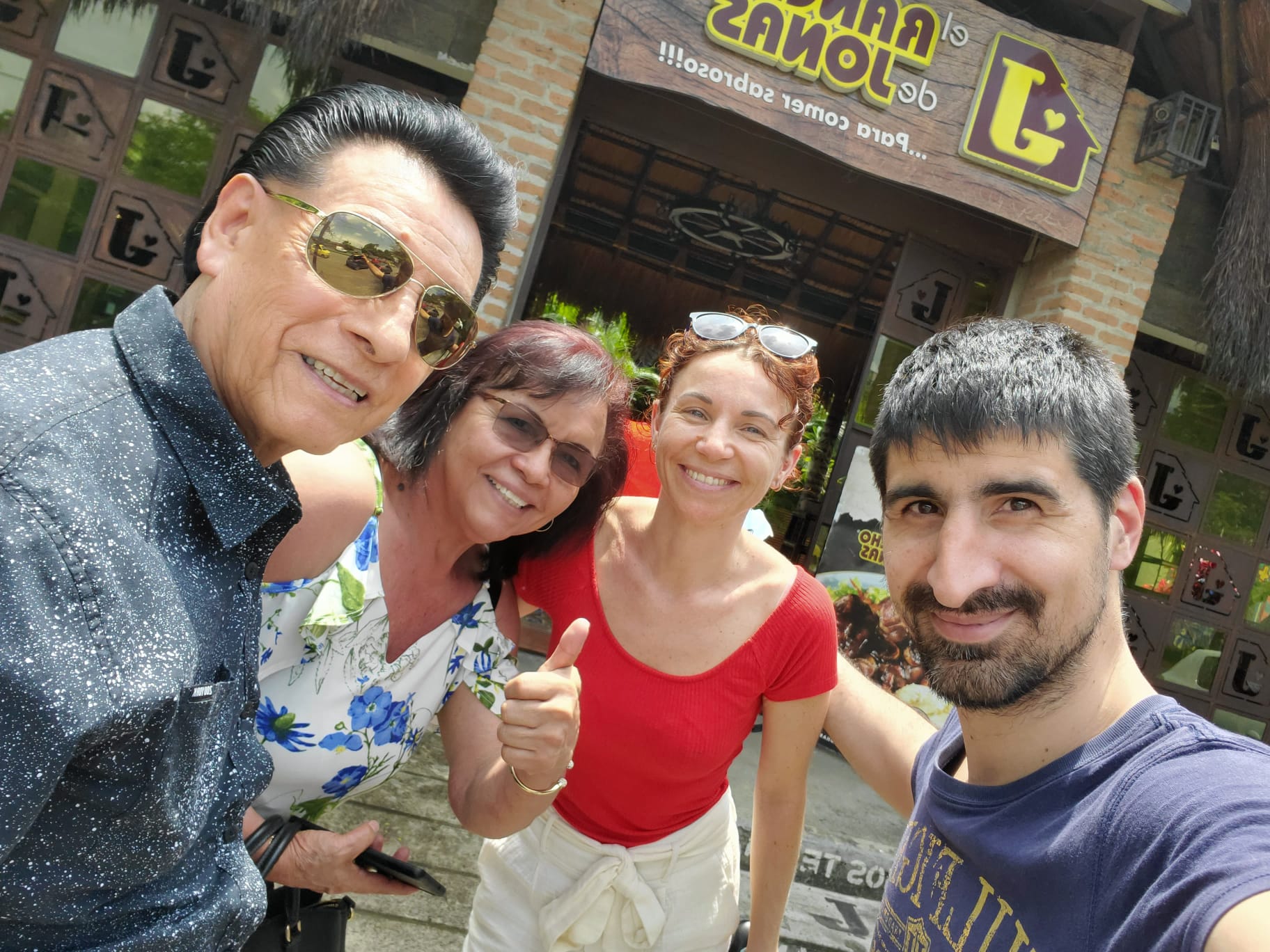 The teacher, in Family, in the city that adopted him as an illustrious son of salsa.

And Alfredito Linares, teacher, in force since 1975.

“There we continue, as long as God allows it. My music is still playing, and that I never paid payola to sound on the stations, and they take me into account for presentations, not only in Cali but in different places, such as the concert that we are going to offer in Bogotá».

What repertoire have you prepared for Cielito Lindo?

«Well, you have to offer the public what they like the most, and among those musical pieces are ‘Mambo Rock’, ‘Tiahuanaco’, ‘Mi dulce amor’, ‘Desconfianza’, ‘Mississippi Mambo’, ‘Fantasia Cubana’, ‘Where are you going’, ‘Cachumbembe’, among others, with a musical front of thirteen musicians, the singing voice of William Viafara, and the salsa show, old guard, by José Pachanga and Teresa Cardona».

Have you not been to Bogotá for a long time?

«No, less than a month ago I was at the Teatro Colón accompanying the maestro William Holland, a great friend who opened the doors for me in the United Kingdom, and who introduced me to the BBC in London. It was a formidable concert of music from the Pacific, with variations of salsa and jazz».

Master surprised by his vitality and lucidity at 78 years old. What is the formula?

“Life is a discipline and you have to assume it as such. This implies keeping the balance in our actions and taking care of the body and mind that the creator gave us as a gift. With my wife we ​​have a healthy diet. We went for a walk. I have been a Jehovah’s Witness since 1995, and that interpretation and knowledge of the word through biblical studies brings immense peace and tranquility. It is something so simple that it is based on two primary commandments: ‘love God and his son Jesus Christ above all things, and love your neighbor as yourself’».

Do you think that this absence of faith and spirituality is what has humanity on the edge of the precipice?

«It is seen. These are complicated times. Humanity allowed itself to be absorbed by materialism, excessive ambitions, consumerism, vanity, and neglected its interior. That is why we are as we are: struggling to stay afloat in the midst of wars, hatred and grudges, an absurd, inconceivable enmity.

Master, you have been characterized by projecting an image of a refined and elegant artist, like the leading men of the golden age of Mexican and Argentine cinema. Do you have a lifelong hairdresser?

“Not all my life, but here in Cali I go to Magaly, near where I live, who does my hair and nails.”

Thank you teacher for your time, it has been a pleasure talking with you.

“Thank you, Richard. I hope you enjoy the concert in Bogotá.”

Julián, the man who knows the secrets of the stones

Alfredito Linares and his ‘Mambo rock’: “I never paid payola to play on the radio” – Las2orillas.co