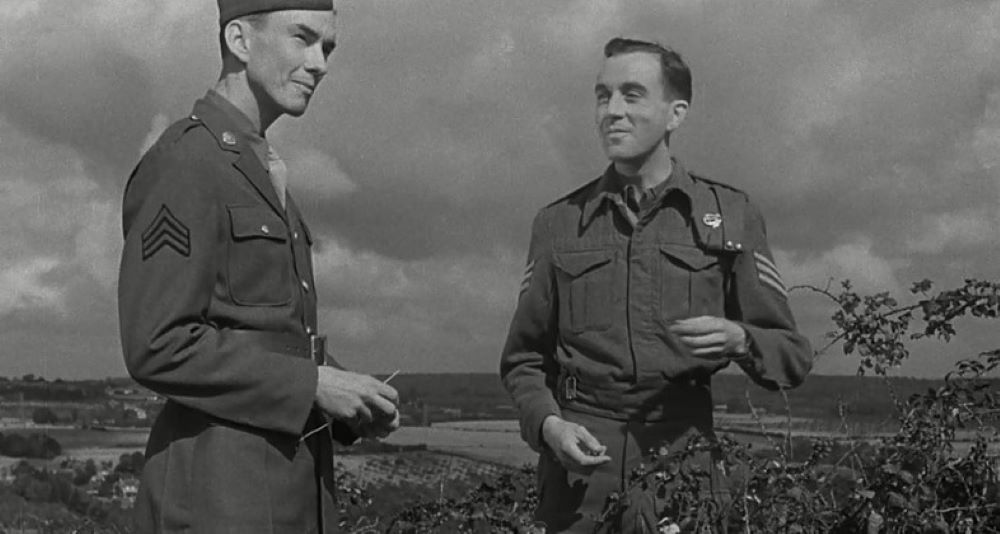 Shot just after Colonel Blimp, A Canterbury tale is an exciting film rich in meaning, a unique and unclassifiable work, at the crossroads of many genres, but also of several eras and multiple themes. One of the duo’s greatest successes Michael Powell and Emeric Pressburger.

For a British audience, the name Canterbury has a particular religious resonance. If the King (or Queen) of England is the supreme head of the Anglican religion, the first religious figure in the country is the Archbishop of Canterbury. The city is therefore one of the centers of the spiritual life of England, and this is one of the aspects that must be kept in mind when starting this film.
Right away, A Canterbury tale makes the connection between the medieval past and the contemporary era of filming (so 1944, in the middle of the war). The title refers, of course, to Chaucer’s classic, one of the pillars of English literature, of which a voiceover reads an excerpt to us at the opening. It mentions an annual pilgrimage which brings the inhabitants of the county of Kent to Canterbury Cathedral in order to perform miracles.
An ellipse of madness then takes us from the Middle Ages to the modern era: a young aristocrat watching his falcon in full flight turns into a young soldier watching an airplane in full flight. Here we are then in the contemporary era of filming, in an England bombarded daily by the Luftwaffe, but the links between the past and the present form the plot of the film. Thus, young Alison Smith thinks she hears medieval pilgrims and their music as she finds herself on the ancient road that leads to Canterbury. Convoys of pilgrims on horseback turned into columns of chariots. And the whole film is constructed, ultimately, like this pilgrimage which will lead these three modern protagonists (a British soldier, a GI and a young woman) to Canterbury Cathedral.
An interrupted pilgrimage as far as Bob Johnson is concerned. An American sergeant, he was supposed to go to Canterbury but, following an inadvertence, he got off the train at the previous station, in the village of Chillingbourne. There, he meets a British sergeant, Peter Gibbs, who is to join his unit, and a young woman, Alison Smith. She volunteered to carry out work in the fields, in a context of war where, the men having gone to the front, there was a lack of manpower for agricultural work. The trio going to the hotel in the village, in full curfew (so with the ban on turning on the lights, Alison is attacked by a stranger who pours glue in her hair. The protagonists then learn that this type of attack has become common in Chillingbourne.The attacker is nicknamed the Splicer.
The next day, Alison manages to persuade the American to investigate with her to discover the identity of the Splicer. An investigation that will above all serve as an excuse for an emotional dive into the daily life of the British countryside, to meet a peasant world whose practices have hardly changed since medieval times. Here too, the directors bring back to the present images of the past, ancestral knowledge, the ancient life of a world that seems to have escaped evolution. All of this is further enhanced by the fact that one of the main characters, Tom Colpeper, gives lectures on Kent, its beauties and its history.
In fact, during many scenes of the film, it is difficult to say in which era we are, as what is happening there could have taken place 600 years earlier without major changes. It is this constant link between past and present, this permanent resurgence of the past in the contemporary world, which provides the plot of the film.

But A Canterbury tale is not limited to that. Through the many discussions that dot this film, Powell and Pressburger tackle many subjects, always in a light way. The music, the differences between the USA and England, many things run through the film and make it a rich and dense work, without the directors ever trying to impress us. On the contrary, there is a fluidity of the narrative which, although slow, never stops and remains fascinating from one end to the other.
Because what will interest the directors, ultimately, is not to know the identity of this Colleur, simple excuse for the rest. The main project is, without a doubt, the eulogy of daily life in the English countryside. When the identity of the Splicer is revealed, his supporting documents are interesting: his goal is that his victims, all passing through the county, can stop and have a chance to discover the beauty, the tranquility, the sweetness of live from Kent. In fact, the film reserves long contemplative beaches on the beauties of the countryside, and the whole thing is almost constantly bathed in superb light. Rurality remains linked to the past, but it is also an essential issue. And the film is built on a succession of encounters with remarkable characters who inhabit this corner of paradise.
A corner of paradise troubled by war, of course. Conflict is everywhere : two of the protagonists are soldiers, one of whom is going to the front. The third comes to the countryside for reasons directly related to the war. The sky is covered with airships providing anti-aircraft defense, and tanks regularly cross the fields. As for Canterbury, it is transformed, disfigured by the bombardments.
However, if this conflict has modified the habits of life, it has not upset the essential: the beauty of the countryside and the small streams, the tranquility, the rhythm of life, and spirituality.
Because, after all, it is, there too, one of the important issues of the film: spirituality. The film is built on a parallel between the medieval pilgrimage and the action that guides the protagonists, and everything ends in Canterbury Cathedral, where miracles happen.
This spirituality does not wait for the end of the film to manifest itself. It is, ultimately, throughout the film: in this light, in this serenity, in these fields traversed in the wind, and finally in this omnipresence of the past.
It is all this that gives this unique flavor to this film which is unlike any other. A story full of softness and nuance makes canterbury tale by Powell and Pressburger an unclassifiable film, at once comedy, romance, drama, war film, investigative film, spiritual film, etc. A film of infinite richness, endowed with a very fine production, knowing how to share with us this beauty and this serenity of which he sings the praises. A masterpiece.

A Canterbury tale, a spiritual portrait of a centuries-old England | LeMagduCine

TV programs for tonight, Friday 10 June 2022. Three new episodes of New Amsterdam 4 on Canale 5
I eat your heart: review and plot of the film
Dante, Pupi Avati's free and ancestral cinema that tells the story of the great poet and hits the bo...
Tweet
Share
Share
Pin