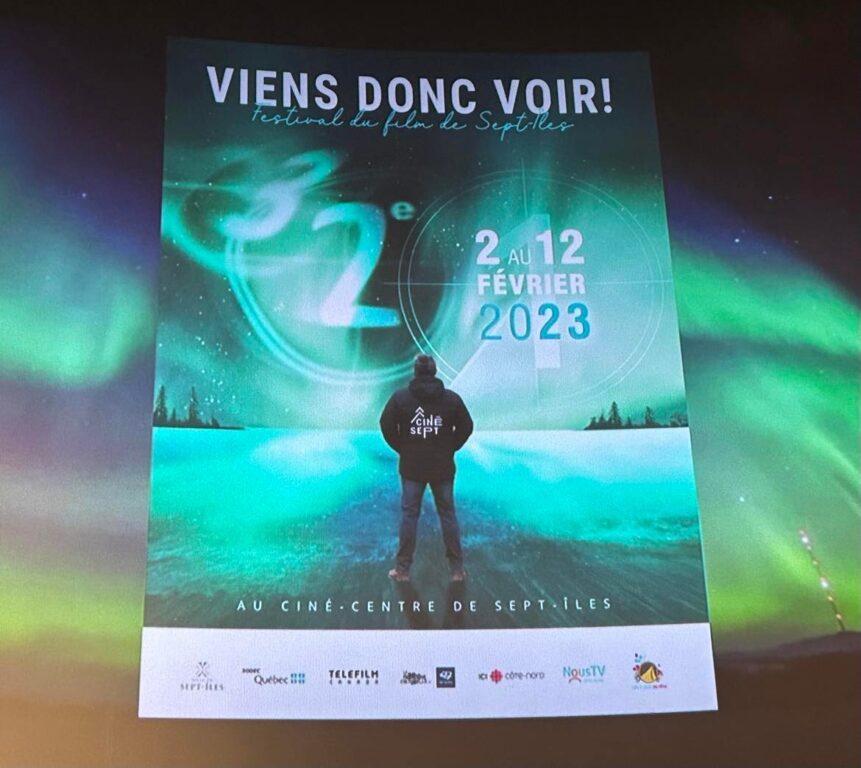 The program for the 32nd edition of the Sept-Îles Film Festival, which will be held from February 2 to 12, 2023, was unveiled on Wednesday.

After a difficult pandemic, the Festival team chose a unifying theme: “Come see! to promote the accessibility of cinema for all.

Festival president Émilie Lavoie is delighted with the arrival of new coordinator Christophe James, who has brought a breath of fresh air and several ideas to offer “diversified programming and films from here and elsewhere”.

The committee studied about a hundred films before selecting 23 films which will be presented in addition to the opening and closing events and non-festival activities.

French films will be particularly honored with no less than 14 feature films across the Atlantic. There will also be four Quebec films.

The new event coordinator, Christophe James, is delighted with this varied program ranging from documentaries to thrillers, including comedies and even crime dramas. It promises high points, thrilling moments and giggles.

Short films about the region will be presented during the opening and closing ceremonies. A mini-bingo is also part of the novelties allowing to offer several gifts to the participants.

More than 100 tickets will also be donated to community organizations to allow people who are not used to seeing this type of film to go to the cinema.

white dog – Anaïs Barbeau-Lavalette – Drama Quebec
In 1968, in Los Angeles, the writer Romain Gary and his wife, actress Jean Seberg, discover that the German shepherd they have taken in has been trained to attack black people.

A good boss – Fernando Leon de Aranoa – Drama Spain
A week before the visit of a committee that could award his company an award of excellence, a manager tries to solve the various problems of his staff.

Without filter – Ruben Östlund – Satirical comedy United States
An influencer and her model spouse are invited on a luxury yacht, whose captain is a Marxist alcoholic.

Noémie says yes – Geneviève Albert – Drama of manners Quebec
A troubled teenager runs away from her youth center and finds an ex-boarder, who convinces her to work as an escort during the weekend of the Formula 1 Grand Prix.

Cut! – Michel Hazanavicius – Horror comedy France
The chaotic underside of shooting a zombie movie, made in a single sequence shot for live streaming on a Japanese website

Bolivian stories – Guy Simoneau – Documentary Quebec
Having left to film the daily life and customs of indigenous women in Bolivia, the director finds himself caught up in the turmoil of the controversial fall 2019 election.

Mashad Nights – Ali Abbasi – Social drama France
A journalist from Tehran goes to Mashhad to track down a serial killer who has made it his mission to cleanse this holy city of its prostitutes.

Tori and Lokita – Luc Dardenne, Jean-Pierre Dardenne – Social drama France
In Belgium, a young African refugee, at the mercy of a smuggler and a manufacturer of false papers, is rescued by a young landed immigrant, whom she passes off as her brother.

The real family – Fabien Gorgeart – Drama France
A foster family, who raised a boy from the age of 18 months to 6 years old, is devastated by the return of the biological father, who has come to claim custody.

Sibling – Arnaud Desplechin – Drama France
A theater actress, who hates her writer brother, avoids meeting him when they go to visit their parents, seriously injured in an accident, in the hospital.

Bones and all – Luca Guadagnino – Horror drama United States
In 1988 in the Midwest, a young cannibal looking for her biological mother crosses paths with a young man, also a lover of human flesh.

As Bestas – Rodrigo Sorogoyen – Thriller France (preview for Quebec)
Settled for a long time in a small Spanish village, a couple of French farmers suddenly attract the wrath of two local brothers, determined to drive them out of the region.

Full time – Éric Gravel – Drama France
Chambermaid in a Parisian palace, a single mother living in the countryside tries to combine looking after her children and looking for a new job.

The high school student – Christophe Honoré – Drama France
After losing his father in a car accident, a 17-year-old boy will spend some time in Paris with his older brother, an emerging artist.

stars at noon – Claire Denis – Romantic drama France
Stuck in Nicaragua, a so-called American journalist engages in a torrid relationship with an English consultant, wanted by the CIA.

The heroics – Maxime Roy – Drama France
With the help of his son, an ex-junkie tries to rebuild his life while taking care of the baby he had with his ex-girlfriend.

passengers of the night – Mikhaël Hers – Dramatic Chronicle France
In the 1980s in Paris, a mother, left by her husband, finds a job with a radio presenter and takes under her wing a fragile young homeless person.

Under the sun – Charlotte Wells – Drama United States
Twenty years after a memorable vacation with her divorced father, a thirty-year-old tries to reconcile her memories of this man with the secrets he was hiding from her then.

Belle and Sébastien: New generation – Pierre Coré – Adventure France
On vacation in the Pyrenees with his surly grandmother, a young Parisian befriends a shepherd’s dog mistreated by his master.

Ernest and Celestine: The Journey to Charabie – Jean-Christophe Roger – Animation France
Accompanied by an orphan little mouse, a gruff bear returns to his native land, Charabie, to have his precious broken violin repaired.

The details of the programming schedule will be revealed soon on the site: https://www.cine7.ca/edition

The CINÉSEPT Festival has existed since 1991, several films are in competition there each year. Emphasis is also placed on Quebec films, but also on international productions presented exclusively in the region.

A 32nd edition of the Sept-Îles Film Festival under the theme Come see!