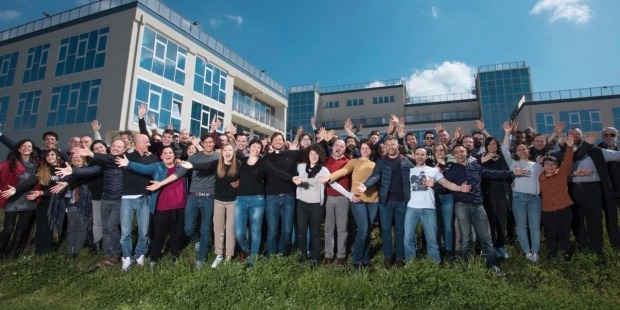 This event was celebrated by Cardinal Marc Ouellet who says of the community founded by Chiara Amirante: “God’s work that transforms broken lives into witnesses of the Resurrection”

Twenty-nine years have already passed, when the first reception community was born in Rome “New Horizons”. Here hundreds of young people, coming from extreme experiences, begin to rebuild themselves through a rehabilitation pedagogical programme.

In a short time the community was transformed into a real one “factory of love“, a great circuit of solidarity and acceptance. They are the same young people who, welcomed and reconciled, feel the desire, the urgency to commit themselves personally to actions of solidarity in support of those in serious difficulty.

Witnesses of the Resurrection

The occasion of the party of “New Horizons” doubles because it coincides with the feast of the baptism of Jesus, and thus the celebration itself becomes the place that bears witness to the great gift of God which is repeated in every young person who is saved and accompanied towards a life of fullness. Every boy becomes a witness of Salvation.

“TO New Horizons one always breathes a strong presence of the Spirit and contemplates the Work of God that transforms broken lives into witnesses of the Resurrection and authentic missionaries who bring the specific charism of Joy to a World that is dying for lack of Love, loneliness and ‘globalized indifference – declared in his message addressed to the community, the Cardinal Marc Ouellet, Prefect of the Dicastery of Bishops of the Holy See – I wish the whole New Horizons family to boldly continue being a portion of the Church going out into the existential peripheries of many hearts, because today there is so much need and the Gospel of Joy is the true cure for the diseases of the soul that they are bringing too much death. Your testimony is a great sign and seed of hope” concluded Ouellet

“With a heart full of gratitude we thank God for this large family and for the many miracles we have contemplated over the years. – explains Chiara Amirante, Foundress of the Community – In these days of prayer we will entrust every person wounded in the heart, in the soul and by the blows of life, certain that for everyone there is always a possibility to start afresh and be reborn”.

A story that begins from the last ones

Chiara Amirante herself recounts some episodes in a short text that appeared on Believe which explains well the specific role of the feast of the Baptism of Jesus for the Community:

In January 1994 with the first boys welcomed we had a wonderful experience, in which we understood that we were born as a community thanks to a strong blessing from the Holy Spirit.

For nine days, we did a somewhat special retreat, because the boys in the group were rather “special” people. To tell you one, there was a boy on leave from prison, who howled like a werewolf at night. It was everything and more, yet it was a beautiful retreat. We had arranged for the nine days to end with the feast of Jesus’ baptism, with the aim of asking for the gift of the Holy Spirit on that day with the faith of the little ones.

That day we had an experience that totally turned me upside down: the moment we sang a very simple song song of invocation to the Holy Spirit with all my heart, we have experienced the grace of Pentecost; I had the physical sensation that the sky was opening up: in fact, a grace and power descended from above so even the hardest hearts melted. We all found ourselves in tears of emotion, joy and repentance that only God can inspire. We stayed in the chapel by the power of God’s presence and strength from nine in the morning to ten in the evening, with half an hour for lunch. In the evening I had to throw everyone out because I thought: «Here I’m getting into an overdose of prayer!». They didn’t want to go out, because the experience of God’s presence had been so strong that it had overwhelmed us as only He can. Then there was a shower of graces and we found ourselves speaking in tongues and didn’t understand much. We had the first strong experience of being “one heart and one soul” in God, invested by the power of the Lord’s grace.

It emerges from Chiara’s stories but it is from the words of Don Davide Banzato who met her in 1995 «We were all struck by the sunny smile that lit up her face. She was introduced as the founder of a new community called New Horizons. She too spoke Roman and was nice. His words catalyzed everyone.”

Chiara Amirante’s testimony was oriented towards her adventure in the hell of the street at Termini Station in the 1990s. A true Bronx. As a young man, Don Davide Banzato recounts, reporting the testimony of that hitherto unknown girl – she had had a serious illness. It was an anterior and intermediate chronic uveitis involving the retina, probably related to Behcet’s syndromeanother terrible pathology of which all the symptoms were present.

After losing eight-tenths of sight, had been subjected to painful treatments, such as cortisone injections in the eyes every two days. At some point in history, something extraordinary happened. After a prayer addressed to God, she was completely healed, without any posthumous trace of the disease remaining and totally recovering her sight, indeed arriving at eleven tenths!

For the doctors it had been an inexplicable cure, for her it was God’s answer to a precise prayer: she had asked to be put in the physical condition to be able to go to street children, to those who were sick and had not yet known the love of God, to share the “true miracle” – as he had defined it – or the discovery that even in the most atrocious suffering it is possible to preserve an inner peace which is the fruit of communion with God.

But the inner drive that made her start this journey – which has never stopped – of service to the most disadvantaged children, is Chiara Amirante herself who defines her as “crazy and irrational”. “So – she reveals in a book – one evening I turned to God with a simple prayer:” Father, I don’t know if this crazy idea of ​​going out on the street at night in search of the most desperate is you who put it in my heart. I am aware that for a girl it would be very dangerous, but if by chance it is you who makes this desire grow inside me, give me a sign: give me a minimum of more health so that I can realize it”». So it was.

Spirit therapy Of Chiara Amirante is a path of self-knowledge and inner healing on the Art of loving that can accompany you to discover the prodigy that is in you, the divine spark imprinted in your soul, to make it shine in all its beauty and live every moment of the your life to the fullest. A path to achieve full happiness, peace and inner freedom by learning the art of loving.

How? Taking a serious path of self-knowledge to discover more deeply: who we really are, beyond the many labels in which we are often imprisoned; what do we really want; where we want to go; what goals we want to achieve; what meaning do we want to give to our life.

Many voices of thanks

If the volunteers of New Horizons, the Knights of Light, number 700,000, among the people who have found peace and rebirth thanks to Chiara’s testimony and to “Spiritherapy” there are famous people, primarily Don Davide Banzato, who is now a close collaborator of Chiara Amirante and that in his book, “Everything but priest never”recalls that he wrote «letters to Chiara Amirante and her replies were a source of great joy. He confirmed my choices encouraging me to continue. I found one of his letters bearing the stamp of May 30, 1996 on the envelope: “Dear David, I was very happy to hear from you again. Regarding your proposal to come and spend a period in the community: if both your spiritual father and your parents agree, you are VERY WELCOME!!!”».

But there is also the singer Nekhe participated, in a dark moment of his life, in the Spiritherapy course. «I have been part of Nuovi Orizzonti since 2005 – explains Nek – Since then I have embarked on a journey of faith that I never thought I would embark on. Not because I certainly feel I have arrived at a profound knowledge of the faith itself, but rather because of the lived experiences that have increased myself and my inner world. One of these spiritual “adventures” is certainly spiritherapy, or rather “self-knowledge”».

«This journey has helped me to confront and recognize certain behaviors that are harmful to my inner growth or to be able to counteract certain moods that are also children of this time. Or let qualities not yet expressed flourish. Admit your limits and work on what I can express. Finally – concludes Nek – and much more simply being able to follow Chiara Amirante in these journeys of her in self-knowledge through the word of Christ. I have found them fundamental in my behavior in my daily life and in my professional life. Knowing yourself means learning to live better».

Something similar happened to Matthew Marzotto, entrepreneur explained: «I had an abyss inside Chiara with infinite patience she gave me live spirituality repetitions. Imagine how lucky I was.”

Spiritherapy has been «a real help, a precious tool for facing life and its inevitable trials, even at work. The adventure to really get to know yourself – continues Matteo Marzotto – and finally have a full, more serene, more aware, more courageous life. And full of joy. “My” Spiritherapy is an extraordinary journey on the path of faith and life. With humility and honesty but persevering in every difficult step, steadfast in the hope of remaining and perhaps growing in the life of the Risen Christ”

But also Don Giacomo Pavanello, who today is parish priest of San Giuseppe Cottolengo, which the diocese of Rome has decided to entrust to the New Horizons Community, says:

“When I was young – he says – I was fascinated by the model of evangelization that the Community implements, street evangelism, fraternal life without clerical distinctions. The priest within the community itself, inserted between the laity and families, as happened among the first Christians. I went to see for myself and discovered that all of this was real».

Over time even people like Andrea Bocelli or the journalist Fabio Fazio approached Nuovi Orizzonti, “captured” by the charisma of Chiara Amirante. Maestro Bocelli in an interview said, in this regard, what it means to be part of the Community:

«It is not so difficult for me that I have always had this inclination towards truth and freedom (…) for me being a Knight of the Light means bringing truth and freedom whatever the cost. And I do it willingly and I must say effortlessly».

There have been tribulations in recent years, for Chiara Amirante, such as the new health problems and the harassment in Bosnia and Herzegovina of officials who extorted the Community which regularly goes on pilgrimage to Medjugorje. But she also received the tributes of the Italian Republic when the President Sergio Mattarella awarded her with the honor of Officer of the Order of Merit of the Italian Republic for her commitment to the least in 2021. A commitment that has never weakened and indeed has widened to include solidarity with the Ukrainian population martyred by the war and in the constant call for “Peace!”

29 years of “New Horizons”, witnesses of the Resurrection