We cut them, we color them, we style them differently over the stages of our lives. Dyed red, shaved à la Barthez or wisely plaited, our hair reveals our personality. Even in our unconscious desires.

LThe first time my daughter’s hair was cut, I felt so funny. She had lost her curly locks forever.
At 18 months, she was no longer a baby. Until then, we had never touched his physical integrity, ”recalls Martine, 46 years old. Many peoples thus perceive the first assaults of the scissors as a weaning. In Arizona, the Hopi Indians ward off evil spirits, because the young child then loses a vital force.

These characteristic hairs of the human species are rooted in the depths of the skull to emerge in the open air, like links between the inside and the outside of ourselves. At the same time cover of the invisible and adornment offered to the eyes, they are 100,000 to 150,000, that is to say 200 to 300 per square centimeter to be thus the object of our care.

We do as we please

Don’t mention short hair to Martine: she suffered from it all her childhood because of her penicillin injections against colibacillosis, which damaged it. “I admired my aunt’s braids and had to wait 15 years to get them long and thick. Today, I’m afraid to go to the hairdresser and I will never go beyond the classic square. A fierce stubbornness despite the advice of those around him.
“Changing your head helps restore your self-image if it has been shaken up,” explains doctor Sylvie Consoli, dermatologist and psychoanalyst. This can be seen in hospital hairdressing salons, in women treated for depression. And it’s commonplace after a sentimental or professional failure. On the other hand, keeping the same haircut forever shows that you are in agreement with yourself. We found each other, we know who we are. Unless this attitude hides a fear of novelty or a form of rigidity. One establishes one’s hairstyle and one does not change opinions or habits either. »

Quite the opposite of the teenager! It is no coincidence that, at this time when we are looking for each other, everyone plays with hair variations. “Children reclaim their bodies and thus signify their autonomy from their parents,” emphasizes the psychoanalyst. “It’s the little imp that appears in me!” said one of her young patients cheerfully, arriving at the end of therapy with red streaks.

Intoxication of metamorphosis
The session at the hairdresser satisfies more than eight out of ten women. It must highlight them for 89%, and 84% come out with a morale on the rise, according to a recent study conducted by L’Oréal. “I go to the hairdresser about every forty-five days. It’s a playful moment, confirms Nancy. Once pruned my thick hair, I feel lighter. I wear little makeup, my hairstyle is the element that changes my appearance. »

The coloring as close as possible to the natural shade fixes the youth. But today, the active woman is no longer content to cover her white hair, tone on tone. These first signs of aging provide him with the opportunity to dare ostensible sweeps, coppery or amber effects. She gives light to her hair… and to her life. Moreover, multiple transformations do not necessarily reflect an unstable temperament, underlines doctor Sylvie Consoli: “It is important to know how to play with your image. The game proves an ability to take a step back with oneself, a certain flexibility of psychic functioning, a rich imaginary life. Like when you dress up or put originality in your dress. »

Some fantasies reach their limits when entering the world of work. Nancy went from a mane below the buttocks to the military cut, before sporting a green and orange crest at 24 years old. “I wanted to take advantage of the freedom that my last years of study offered me. Now, I adopt hairstyles that last when I get out of the shower, neither too original nor too classic, to match my personality. »

Another ritual gateway, service in the colors has put many men on the “short” side after the cool years. For them, it is time to be presentable, to have the head of the job in order to be accepted among the members of their social sphere. And even if we evolve in an environment where fashion allows daring, we stand out to find in the eyes of others, even a small number, an approval that reinforces confidence and self-esteem.

Because let’s face it: this hair anchored four millimeters into the scalp has its roots in our unconscious! Some diseases, such as alopecia areata (which causes hair loss in patches), involve psychological factors such as a bad separation. Similarly, recalls Sylvie Consoli, we often find in women who tear their hair during attacks of trichotillomania (tic consisting in tearing their hair or eyelashes), a great opposition to the mother and a rather absent father. “Through this gesture, they attack their femininity,” she explains.

For those who interpret dreams, the hair “sheathing up to the neckline”, so dear to Baudelaire, expresses a quest for balance between the virile and feminine forces that inhabit us. “Long hair embodies the femininity that goes hand in hand with protection. It is the water that receives the external elements, remains attentive. It is as powerful as the fire (masculinity) which will confront them directly”, adds Marc Dugast, creator of the “morphocoiffure”, a method based on archetypes following the personality revealed by the shape of the face. According to him, adopting a boyish cut denotes ease and independence of action. Conversely, pregnant women letting their hair grow show acceptance of a return to femininity.

And what about men? Does the myth of Samson and Delilah still reign in people’s minds? “Buñuel or Kojac are not really symbols of ‘wimps’! defends Patrick, in his fifties, a journalist. The Barthez cut brings egg skulls up to date. And the seduction operates… supported by the phallic fantasy of this smooth head. However, anxiety dominates at the sight of these handfuls of hair that remain in the hand during a shampoo. Unlike fashion enthusiasts (minority!) who can expect a regrowth, we immediately feel dispossessed, devalued. “In men, hair loss symbolizes castration,” says Sylvie Consoli.

Inheriting your father’s baldness at 20 can soften the blow. An informed man watches for the inevitable. First reflex: jump on an anti-hair loss treatment. Then like Thierry, a 34-year-old engineer, we resign ourselves. “I even discovered an advantage. As I am believed to be older, I have the impression that I am granted capital-confidence in my career. A Buddhist tune induces wisdom. “The more the cerebral part is cleared, the more the spiritual dimension is valued. But at 18, you need to build a future: you are more attached to material considerations! continues Marc Dugast.
Close-cropped hair also stigmatizes submission and constraint, through the soldier or the convict. Opposed to it are the manes, a symbol of innate wildness and freedom.

Thus Hervé, illustrator, abandoned the mower: “At 43, I feel more free in my head. I let go of more things that have been internalized so far, including from a pictorial point of view. My gesture is more “thrown”. »

Moods also emerge from the stroke of the comb. Strict chignon or ball whose clip neglects a few crazy curls… Simple practical question? Marc Dugast goes further: “To tie the hair with the desire to be clear, it is to mark its will to move forward, to be tonic. Letting them frame the face can, on the contrary, denote a need to withdraw or a depression. “Unless the darling is released in the evening to better transition from serious employee to tempting seductress…”

Whiten in just one night? They are said to be “tired”, “taciturn”, “depressed”. Is it only our hair we’re talking about? Their cycle of growth and fall depends on our hormonal system. Their chemical structure, which contains our barcode (DNA), allows them to capture everything we swallow (food, medicine, drugs, etc.). Knowing that they grow 1 to 1.5 centimeters per month, 6 centimeters in length offers a logbook of our state of health over six to nine months.

Under the effect of an emotional shock, for example, hair can change texture depending on its natural quality and the individual’s ability to overcome nervous fatigue. From there to white hair in one night like Marie-Antoinette before her execution… Impossible, according to scientists. It would rather be a brutal alopecia sparing white hair thus made majority, therefore more visible.

We talk about it on the Psychology forum

“To order your hair is to order your personality”
“For those who know how to read them, it is possible to discover fears,
anxieties, blockages depending on the way the hair is arranged around the face”, assure Michel Oudoul, energy specialist, and Rémy Portrait, manager of a hairdressing salon in Paris. In “Hair, talk to me about me” (Dervy), they offer some readings of cuts:

– Uncovered forehead, with the hair combed backwards, would mark the will to move forward. These would often be people who are not afraid to face life or the gaze of others.
– The parting in the middle would be the sign of a desire for inner balance between yin and yang, anima and animus, feminine and masculine. The line on the left? Attempt to cover the feminine in itself. To the right ? Difficulty accepting the masculine in oneself.
– Fringe : the fear of revealing oneself or a certain shyness would lead to this covering of the forehead. Long, thick, short or tapered, each type of bangs evokes the level of protection that the person needs.
– The free neck: hidden part, the neck would represent the deep self. By revealing it, we show ourselves as we are.
– Exposed temples: synonymous with openness, they would allow you to broaden your view of yourself or the world. Temples covered? Internalized person who finds it difficult to open up. 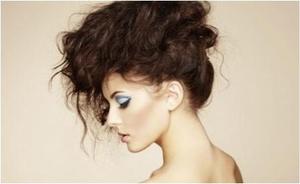 ==> Do you take care of your hair?
Whether blonde, chestnut, ebony, short, long, curly, frizzy, our mane, undeniable symbol of seduction, needs to be pampered.
It is still necessary that she benefits from the appropriate care. To find out if you know how to take care of your hair, take the test.

What your hair says about you