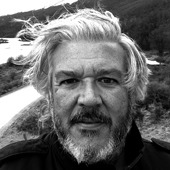 James Plensa (Barcelona, ​​1955). Dress in rigorous black. Slow movements. Hugely successful artist. The interview takes place in a magical space near the Basilica de la Vera Cruz, to which he will bring a distinguished contemporary touch. It gives the impression that the silence that reigns here, surrounding us, is alive, listens and sees.

– How do you feel in the middle of this silence?

– How wonderful, silence makes it easier for you to be at peace, something that is missing a lot today.

– Well, let’s talk almost in whispers, if you like.

– Do you work with the same enthusiasm as always?

– After the time of the pandemic, which was very complex and brought so much suffering to many people, who lost family and friends in a very sad and lonely way, I perceive a new return to activity perhaps with more encouragement than before, perhaps because we have experienced what the total paralysis of everything means. There is a huge desire to do things internationally. In my case, I had the privilege of being able to continue working in my workshop, but I also understood what it means when everything is paralyzed. Now I have returned with a renewed passion for travelling, and making installations, exhibitions and projects. I am very stimulated, very far from falling into a routine.

– Have you slowed down? Commissions arrive from half the world.

– I think I write less and make less than before. I thought maybe it’s because I’m getting older and I don’t feel like it anymore. Not long ago I read some texts by Oscar Wilde in which he said that the older he got the less he wrote, because when you start you have the need to understand life, but now what you need is to live it. That’s right: I no longer have so much need to talk about life, now what I want is to live it. I do fewer projects, but I really enjoy them and I give myself body and soul.

– Did you feel afraid?

– No, honestly I didn’t feel afraid, what I did feel was a lot of sadness… So many people disappeared, the elderly were so helpless… Laura [su mujer] and I were aware of what was happening in all parts of the world, because we have friends everywhere. Fortunately, both my family and I did not have any problems. What I think we need to do now is turn the page and look to the future.

– For the first time he devised a work, ‘La Puerta del Alma’, not only for a Basilica, but for a holy city, Caravaca de la Cruz.

– The Basilica [de la Vera Cruz] It is extraordinary, and what it represents, as well as this holy city, but I have to tell you that what convinced me to carry out the project was the people here, the members of the Brotherhood of Vera Cruz. We developed a project that excites me a lot, I am more interested in spirituality than in religion. They have an ecumenical will that I applaud: anyone from any place, religion and culture who wants to share their spirituality in this place is welcome. They gave me the opportunity to project a door. I don’t want a door that closes, I want a door that when it opens looks like it’s hugging you and inviting you in. A door that would be at the height of the Basilica, but also at the height of my ambition to make this information clear: I don’t want to know where you come from or who you are, the important thing is that you have come and we are together. The hand of a Blessed Christ is the protagonist of the door, which neither rejects nor chooses. When opened, the sculpted hand expands, becoming the Christ of generous love that protects and embraces all Humanity.

– Would you project a work for a mosque or a synagogue?

– If I were commissioned by people as wonderful as the ones I have found here, without any problem.

– And if finally the realization of your project is not carried out? Look at the controversy unleashed with the doors of Antonio López for the Cathedral of Burgos.

– When you agree to develop a project, you also accept that it may be rejected. It is part of life. I have many projects in the drawer that I think were wonderful and that, for a thousand reasons – economic, criteria, because politicians or tastes change… – have not been done. And nothing happens. I really enjoyed creating the project. From now on, it is no longer up to me to decide whether to do it or not. If it is done, he would be the happiest man in the world; if it is not done, it would not be the most unfortunate either.

– I don’t think the people who work with me in the studio said that about me [sonríe], but what is certain is that I try not to be overwhelmed by situations. I am very emotional, and perhaps I have learned to hide them behind a mask, although not very rigid because it is quite easy to destroy it. I try to be calm when I do something that interests me a lot: always send a message of optimism. I think that art has abused a bit of the tragic and terrible message, as if there were no tomorrow, and I am convinced that there is a tomorrow and that beauty has an extraordinary capacity for transformation and regeneration. I have been trying to send this message of optimism for a thousand years.

“Yeah, but it doesn’t seem like circumstances are on your side.”

– The other day I reflected on the fact that, practically, we have always lived in war, what happens is that it seems that it is only war if it affects you directly. The world is becoming more global, and it is more and more evident that we are always at war. It seems that it is impossible for peace to be the common denominator, the moments of peace are so minimal that it seems that they do not exist.

not a single death

– Ukraine, that horror that does not stop.

– I have always thought that the worst thing that can happen is the death of a human being, and that there is no ideology that deserves the death of a single person. Everything we are seeing regarding the Ukraine war is so absurd, so painful. I exhibited in kyiv in 2012, and have exhibited in Moscow several times. I have friends in the Ukraine, I have friends in Russia, where I exhibited for the last time in St. Petersburg, at the Hermitage. It is very difficult for me to imagine that one and the other are fighting each other.

«I think that art has abused a bit of the tragic and terrible message, as if there were no tomorrow»

– In February 2023, the opera ‘Macbeth’ will arrive at the Liceu, for which you will be the stage director, set designer and costume designer. Why ‘Macbeth’?

– I have been reading and rereading this work for many years. ‘Macbeth’ fascinates me, among other things because of the importance of the invisible in this work. Macbeth, for example, realizes that he has not murdered a king, a man, a being; he has murdered the possibility of sleep. In my ‘Macbeth’ there is neither mud nor blood, nor is Lady Macbeth the bad one. We are all a bit Macbeth, a bit Lady Macbeth, a bit Macduff, a bit Malcolm, a bit Duncan. At some point in our lives we have brushed against these characters, we have acted like them. When they talk about Macbeth representing power and Lady Macbeth manipulation, that seems to me to be a very superficial view.

– How do you conceive this character?

– What makes us strong, what saves us?

– I believe that our imperfection and the will to be better. I still read them a lot, and have worked on the 30 articles of the Universal Declaration of Human Rights. I think it is one of the most beautiful poems ever written, but it is a poem. The reality is that we do not apply a single comma of this text in anything. His 30 articles are wonderful, they are of absolute beauty, of the same beauty as the ‘Song of Songs’, which I also keep reading insistently because in it we find the aspiration of absolute love, which we will never achieve either. That going around the walls of Jerusalem looking for the person you love to take her to the room where your mother conceived you…; I think it’s one of the most beautiful things ever written. In the Universal Declaration of Human Rights, each point is a lesson in intelligence, but also a state of desire. I think this is what makes us human, yes, our imperfection and our desire to improve.

– The extreme right is gaining ground.

– When I was very young, I read books that always spoke of History as a pendulum theme, and it seems that they were right. When we have achieved something wonderful, or very good, we suddenly go to the opposite side. For me, for example, it was unthinkable that after Obama Trump could be elected. If we already know how Obama worked, what we should have achieved is that the next one was better than him. Well no, let’s go back! And this happens to us very often. This rise of the extreme right is not their success, it is our mistake; We have done something wrong as a society, just as we are doing it wrong with the climate, leaving our children a world that is no better than the one we inherited. Now the extreme right is winning in Italy, we have the rise of Vox in Spain, Marine Le Pen in France, and even gaining ground in Sweden, countries with a great democratic tradition. It is really worrying.

– Do you still trust?

– I continue to trust, as I said before, that beauty, creation, is a balm that transforms, heals wounds and improves people. But its way of penetrating society is so slow. There are so many wonderful artists, there are so many extraordinary works of art, and yet it seems as if we are impervious to it all.

– What advice did they give you that made you reflect?

– Once the director of the Tel Aviv Museum, regarding Petrarch and the trip, told me: ‘Jaume, always try to be a foreigner’. This does not mean that you do not feel comfortable where you are, but that you should question your position in life. And always be open to new experiences, to let yourself be surprised. I understand that the place where we are born is only a starting point from which to find where and how to develop. I, who have known countless cultures, do not stop asking myself who I am, where I am going…

– Me? In my study. I am very surprised that Laura puts up with me because I am so boring. [sonríe].

«We have always lived in war, but it seems that there is only one if it affects you»