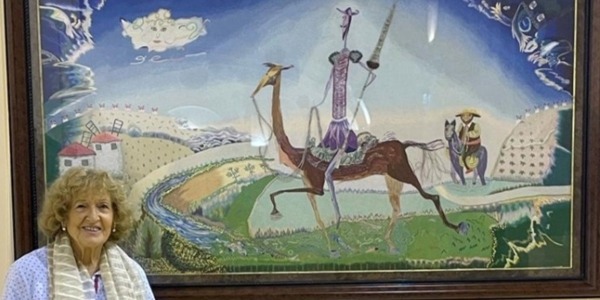 «You have to see it, it cannot be explained with words. If you don’t see it, it’s impossible to get used to the idea,” insists Victoria Puebla. Her pedal machine embroideries are leaving everyone speechless who enters the San Marcos Cultural Center, located in one of the most touristy streets in the old town of Toledo. She has everything from family members and famous people embroidered to landscapes, animals and dreamlike themes. «His is what attracts the most attention because not usually seen; above all to the Japanese”, intervenes his son Jesús Javier Lázaro, who also exhibits photographs and poems in a family exhibition in which another offspring, Ángel Tomás (Ivo to friends), participates with paintings and photographs.

Her mother radiates energy as you take in her ornate manicure, done by her teenage granddaughter Cecilia. «I wanted to exhibit with my children», says Victoria, mother of four children, who has seen her dream come true after six years of waiting, pandemic through: she is teaching the world half-life embroideries together with Ivo, a photography professor at the School of Arts and Crafts in Toledo, and Jesús Javier, who shares paragraphs from his book ‘Contar la vida’ and verses from ‘El verano de los flamencos’ about Africa with the public. “My children also have very nice things”, presumes the parent.

In this exhibition there is a lot of spirituality, says Jesús Javier, “and the place lends itself to it.” Perhaps this is where the title of the exhibition comes from, ‘Sky in flight’, which Ivo came up with and which can sum up the art that the show exudes in three words. Because there is mastery in the 67 embroideries, of different sizes, which have come from the head, hands and feet of Victoria, who will be celebrating her 85th birthday this Friday. Because they have all been made with a pedal machine since 1980, at odd hours and often cold, although she learned to master her passion long before her.

She was six years old when this resident of Toledo, who has lived on Calle Gante for two decades, left her hometown, La Puebla de Montalbán, for the capital of Spain. Since there were eight siblings, her aunt Fermina took her to her house and, at the age of 10, she put her to sew. On the way to her academy, little Victoria passed by another embroidery shop on Calle del Pez and always stared. “I told my aunt that what I wanted was to embroider, but she told me no, because the townspeople didn’t have the money to pay for embroidery,” recalls Victoria, who repeats that “I have to thank Fermina for everything.”

At the age of 15, she returned to La Puebla de Montalbán, began to earn a living by sewing and at 19 an advertisement in a magazine for a San Sebastián academy to learn to embroider by correspondence came across her life. «I had such great luck! I made a sample, sent it by mail to the academy and they returned it to me corrected. But there were times when there was a lot of sewing and I couldn’t dedicate myself to embroidery ». To his passion.

She married at the age of 25 and took the time to finish the higher embroidery course at the same Basque academy by correspondence. The children came and Victoria came up with the idea of ​​making embroidered pictures. She started with the little one, Miguel Ángel, who was 6 years old. «I liked embroidering so much that, when everyone went to bed, I used the machine to do my things. One day, at two in the morning, I saw the photograph of the child on a piece of furniture and I was encouraged. But he only showed it to his little friends. ‘Who is he?’, he would ask them. And everyone answered that Miguel Ángel ». Then he thought that he had not gotten into a “twenty rods” shirt and kept hitting the pedal.

She embroidered her other three children and also her mother, Vicenta, who had given her her machine, a “great” Sigma. «My mom told me to remove wrinkles when I embroidered her face; she, who always dressed in black and to whom I wanted to make colored clothes, but there was no way”, she recalls.

She combined her blessed nocturnal madness with her sewing workshop, where this retired seamstress taught sewing and embroidery, as well as dressmaking. Then, after her work, she locked herself in her world to create her embroidery, even though she was consumed. the picon of the brazier and his feet will remain like icebergs; feet to which I tried to warm them later in the cold bed by wrapping them in the cardigan.

“I was happy embroidering,” Victoria repeats enthusiastically, who picked up magazines at the hairdresser’s to later reproduce characters, such as sarah montiel -has her embroidery signed by her-; Grace Kelly or the Pope John Paul II, whose face he also embroidered on the occasion of his visit to Toledo on November 4, 1982. «Long before he came, I started; I stayed until five in the morning and I arrived in time for them to show it to him – he relates -. They told me to give it to him and I did it with that intention, but at the last minute I regretted it because he was like a son. I have it at home and I don’t regret it.” That papal portrait is now part of a large legacy distributed by the homes of children and relatives.

Victoria has always sewn in her town, because in her apartment in Toledo they would have thrown her out due to the noise of the embroiderer. And this huge hobby has been such that, over the years, Jesús Javier had to buy a machine for his house in Asturias in which his mother could create when she visited him. “She has an obsession,” says the son while his mother smiles. A wonderful obstinacy that has its birthday this Friday, the day before closing such a familiar exhibition.

Victoria Puebla, the art of embroidery is ageless