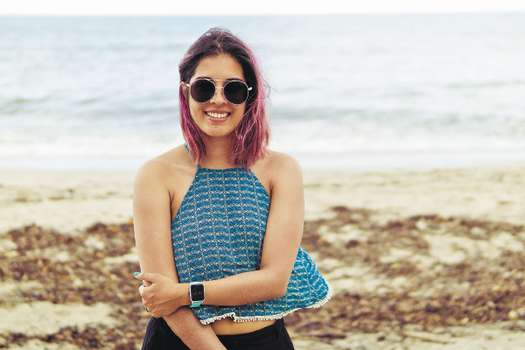 Laura Victoria Bolaño has been a script and philosophy teacher for a decade. She was part of the team that wrote “El man es Germán”.

How has being a librettist nurtured other types of writing?

I did not formally study cinema, but I learned in a more empirical way. I had studied narrative creation and it was created as a symbiosis that maybe later in my life I would not have been able to do. Now, after so many pages and pages, I can find my own voice and my own perspective of narrating. Making movies is expensive and slow, and television is tied to the market, so that limits you creatively, but somehow it nourishes your muscle and your imagination to be able to write other things. For example, The contact It is something that I could not do for the Colombian screen, due to its theme and production. What happens in my case is that the stories tell you the format: a short story, a long story, a short film. If it weren’t for the script, I wouldn’t have the food to strengthen the literary exercise and the same in the opposite direction.

What are your references for the literary exercise?

The subtext, the psychological intentions of the characters, come from philosophical questions that arise from my other work, from moral and political philosophy. I have a predilection for science fiction literature. I always liked Ray Bradbury, Philip K. Dick, British and American literature. Lately I am obsessed with the Argentine writer Mariana Enríquez. I find her literature fascinating, because she recreates terror from the everyday, without it being magical realism. And that is interesting, because Colombia is a country that seems fictional, but it is not. Here there are events that seem invented, but they really happen, it is part of the course of life.

I would think that his story “El contacto” has some of that terror from the everyday. The cult and the armed groups are elements that in a country like this could coincide…

If, according. What happens with stories by authors from other latitudes that border on gore is that for us that is not fiction. In the story in particular I was interested in several things. One, the way in which violence crosses the lives of Colombians, to a greater or lesser extent. Second, this philosophical foundation that questions how we are in the perpetual search for a spirituality that can replace the Abrahamic faith, because that is a placebo effect that we humans have in our lives, we don’t know if there will be something in the afterlife, but the idea makes our existence smoother. In the case of the story, it is a UFO cult, which makes life in a country like this more bearable. And, additionally, the anguish of our generations of what to do with life, before this was somewhat predetermined, we do not want that and it is not easy for us to have it either. There are different concerns of this age that I am interested in exploring.

There is a moment in which the protagonist’s life is at risk, but she is anxious about how to pay the bills if she survives. Where does this restlessness come from?

In the story there is a clear antagonist who is violence, but the protagonist thinks: “If we get out of this, how am I going to face what is coming?” Many times one does not know if it is better to solve oneself or that life solves one. I think it is a very millennial concern, it is something that happens to me. When they talk to me about the future, about old age, for me it is not such a clear image. For me, an idea prevails that our generations will see in the decline of civilizations, and part of that restlessness I tried to imprint on history.

We suggest: How well can pelicans describe Cartagena

A little bit about this question about “living or being lived”…

Of course, one of the big questions in philosophy is whether the universe is determined or indeterminate. If we are conditioned by destiny and we are prisoners of chance or if free will counts. Then I can wait for things to come and resolve themselves or I can build my future and the decisions I make lead to certain results. At least, I think, one must make existence something worthwhile for one.

And how is that done?

Those of us who try to write try to make that anguish, at least, be told. Literature is very therapeutic in that sense. In reality, everything has been autofiction, because those stories that, for example, you find in your journalistic exercise and that you decide to fictionalize have a part of you, your anxieties, interests, etc. And that is why what you write at 25 is not going to be the same as what you write at 35. All are searches and needs to narrate moments. Lucía Vargas, one of the authors of the anthology, talked about that, that she uses literature as a “return to things that happen to her.” She hadn’t thought of it in that conceptual way, but it does make a lot of sense.

If you are interested in continuing reading about El Magazín Cultural, you can enter here 🎭🎨🎻📚📖

“Those of us who write try to make the anguish, at least, counted”

Traces of an ancient civilization discovered in Óc Eo
Families and climate change
Aixa of the Cross. Writer "We go against the system, but we make someone from Amazon work on a Sund...
Tweet
Share
Share
Pin