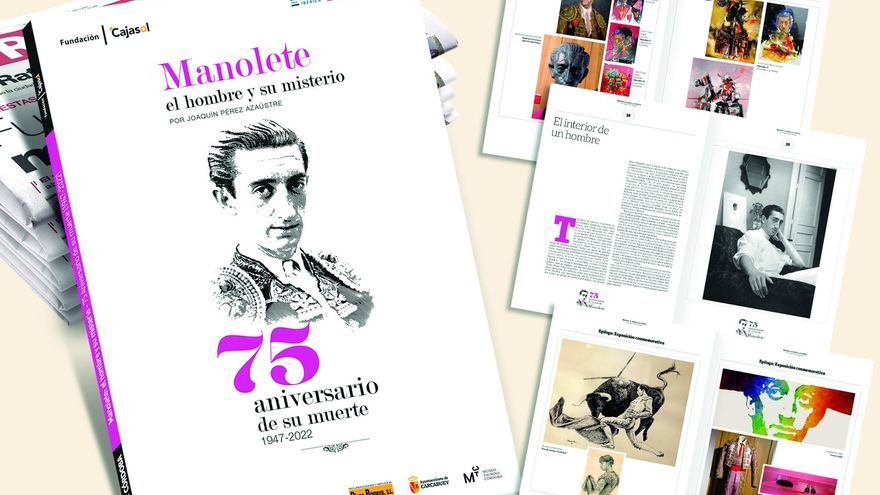 To show the most intimate portrait of manoletethe essence of the character, the soul of the bullfighter. That is the exercise that, divided into 38 shots accompanied by as many historical photographs of the right-hander, has been carried out by Diario CÓRDOBA with the help of the renowned writer and columnist Joaquin Perez Azaustre to make the book that this Thursday delivery for free next to the copy of the newspaper. “This is not a biography or a novel by Manolete, although there is something of an account of his life”, the author clarifies, “what I have been looking for has been encounter the intimate truth of a man who watches us in his portraits». To do this, with a skilful scalpel, the author has used 38 images with which he dissects the character with the sole intention of knowing the story of an exceptional human being who was also one of the greatest bullfighters of all time.

«Manolete is a man and his mystery. He watches us from the myth dimension of him that he has transcended bullfighting and its time. You only have to go into his photographs to intuit that he is still alive, that he watches us from a deep place within himself », assures Pérez Azaústre, which highlights that “with Manolete there is something more. Because of his presence, because of the style that still contains the mystery of his recollection, his spirituality in understanding bullfighting, with that vertical moroseness on the axis of his feet ». In the opinion of the writer, Manuel Rodríguez «he is a brave and profoundly human manas evidenced -despite having served on the Francoist side during the war- the fact that he sought a meeting with the Spanish exiles in Mexico -during the harshest Franco regime-, among whom he will treat the poet John Rejano and former Republican deputy Antonio Jaen Morente».

«This is not a biography or a novel by Manolete, although there is something of a story of his life»

Presentation of the book Manolete the man and his mystery
AJGonzalez

The book starts with the eyes of the bullfighter stuck in the reader and a certainty, that of modesty cultivated by the master through silence and prudence, through the temperance conveyed by his poses and the apparent “remoteness” with which he observes the world. From the interpretation of that look, the reader will be immersed in thethe life story of the bullfighter, from childhood, as an orphaned son who grows up without the physical presence of his father figure but with the weight of his memory and the imperative need to move the family forward, with the same weapons as his father, the cape and the sword.

«Manolete is a man and his mystery. He watches us from his dimension of myth that has transcended bullfighting and his time. You only have to go into his photographs to intuit that he is still alive, that he watches us from a deep place within himself »,

Black and white photographs and detailed description of Pérez Azaústre, that narrates with detail and mastery the intuited soul of the matador, they give volume to a myth now stripped of its best-known side, the one seen from the side of the gallery. Reading the book brings us closer to a young man “who has a hungry face, the hunger that moves the great bullfighters” and that he grows up surrounded by Angustias, Dolores and Soledad, not only the names of his mother and sisters but also metaphors of the heavy atmosphere in which the boy Manuel Rodríguez grew up. With a literary tone that mixes documentary analysis and the fiction that surrounds the novel, Joaquín Pérez Azaústre presents one by one the characters that accompanied in life to Manuel Rodríguez “his mother, Doña Angustias, whom he will adore; the absent father, also Manuel, of whom he barely knows that, at the end of his life, he will fight with glasses because of the condition he suffers from in his eyes; his manager, Pepe Camará, plus a mentor who acts like a father; his nephew Rafael Soria, Calín, who will accompany him until the last afternoon in Linares; his swordsman, Guillermo González Luque, rock’s loyalty; and, of course, his great love: Antonia Bronchalo, Lupe Sino». For the author of Manolete, the man and his mystery, “When a bullfighter dies, what remains is his literature». In this case, the writer enters “into the photographs of the great Ricardo, in a fluid dialogue between word and image, but also between the past and the present to go beyond what these prints suggest, it was about offering the intimate portrait in which I believe, “he said. Who wants to know more details, it is best to read and savor the book.

Presentation of the book ‘Manolete, the man and his mystery’, in the Circle of Friendship. AJ GONZALEZ

Raphael Romerodirector of Diario CÓRDOBA, suffering from hoarseness, could not intervene in the act, but on his behalf, its presenter, Fran Gordónhighlighted the close relationship of the newspaper with the author of the bookwhich began when he was only 18 years old, and thanked the institutional collaboration that has made possible both the publication of the book and the rest of the tribute calendar to the bullfighter.

For his part, the president of the Cajasol Foundation, Anthony Pulido, celebrated the response of the public to the cultural program organized for the anniversary. «For our entity, the set of acts that have been launched are a great example of everything that can be done by way of concerted efforts to boost the cultural industry in this complex context and continue to preserve our historical, artistic and cultural heritage».

The Mayor of Cordoba, Jose Maria Bellido He thanked Diario CÓRDOBA for once again claiming “milestones and figures from the past” in the present, and stressed that the figure of Manolete, in addition to being a sign of identity, “is a icon world that transcends bullfighting and an example of modernity and its own style».

The fifth vice-president of the Diputación, Victor Montoroattended on behalf of the provincial institution, also a collaborator in the events, where he stressed that “Manolete was and is a symbol of our province” and advocated following the example of the bullfighter to “break stereotypes and conformism, be brave and commit to new ways of doing things that involve innovation and progress».

The act, interspersed with a talk by Dr. Manuel Conchaa fan of bullfighting, a lover of the figure of Manuel Rodríguez Manolete and curator of the exhibition organized by the Fundación Cajasol, had broad institutional representation and almost 300 attendees. The book is sponsored by the Córdoba City Council, the Provincial Council, Vimcorsa, Diego Romero, the Carcabuey City Council and the Bullfighting Museum.