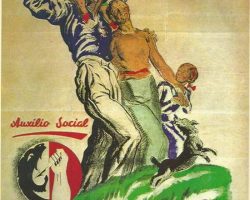 Fernando Fernán Gómez, a genius of our culture who did well in everything he professionally tackled in his life, whether acting or directing films like The Journey to Nowhere, The Strange Journey or The Life Ahead… theater or literature (Bicycles are for summer or his autobiography yellow weather), he made, in 1963, what would be his least-seen title at the time, a film that, just released, was withdrawn from theaters and could not be recovered until after its director died, in 2015. That is why known as “the cursed film by Fernando Fernán Gómez” and the like. The film in question is “The World Goes On”, based on the novel by Juan Antonio de Zunzunegui, a fully fledged social drama, extremely hard and one of his best films as a director.

the world goes onlike another great film from our cinema, the one signed by José Antonio Nieves Conde and with a script by, among others, Torrente Ballester, Grooves (1951), is an uncomplacent vision of Spain after the civil war, the Spain of developmentalism and autarky. The Spain, in short, of Francoism. A Spain that, far from the costumbrismo or folklorism that other filmmakers of the time portrayed, bled from the wound of poverty, misery and social inequalities.

Not surprisingly, at the beginning of the world goes on, after a fade to black after the initial credits, you can read this premonitory quote from Fray Luis de Granada that warns us that what we are about to see is dramatic, perhaps unfair, and ultimately, deeply human: “ You will see the innocent mistreated, the guilty forgiven, the good belittled, the bad honored and sublimated; You will see the poor and humble dejected, and favor will be more powerful in all businesses than virtue”, (“Guide to sinners”, book 1, part 3, chap. XXVIII).

Fernando Fernán Gómez was born accidentally in Lima (Peru) on August 28, 1921, and soon moved to Spain with his mother, also an actress and fervent anarchist. They lived through the second republic, but also the Civil War. In 1936 he joined the CNT actors union and began to intervene in small roles until, ironically, he became Jardiel Poncela, who collaborated until the end of the civil war in the Press and Propaganda of the Spanish Falange and the JONS and he had had to go into exile in 1937 for having been denounced and arrested by the red militiamen accused of having hidden in his house a former minister of the Republic, who discovered him and gave him his first role in Heloise is under an almond tree In 1940.

Coinciding with the recent reissue of his Memoirs, a friend of the filmmaker commented to the editorial: “He felt like a libertarian. He said that communism and capitalism had failed and had led us to an unfair and cruel world”, in public events he always said goodbye with his fist raised and his hands joined and when he died, in 2007, in his funeral chapel and on top of the coffin containing his body, a red and black flag covered it. The anarchist flag.

For his part, Juan Antonio de Zunzunegui, the author of “El mundo sigue”, a Basque born in Portugalete, was an early Falangist who collaborated with the National Press and Propaganda Delegation and also with the Falangist magazine Vertex, reviewing theater premieres. He was awarded all the most prestigious literary prizes existing in Spain and in 1957, the same year that Camilo José Cela took his seat, he became the owner of the “a” chair left by Pío Baroja, who had been his main literary inspiration, and to whom he dedicated his admission speech to the Royal Spanish Academy of Language.

A convinced Falangist and Joseantonian, he fervently shared the ideas of José Antonio Primo de Rivera regarding social justice and the evils of both communism and capitalism at all costs that tried to strip man of all traces of spirituality and were only built on materialism. Like José Antonio, he put man, the person and not the State at the center of everything. All this made him very critical of the regime from almost the beginning, seeing how the principles and values ​​in which he believed, those of José Antonio, were prostituted under the caudillismo of Francisco Franco. For this reason his work, rough, uncomfortable, extremely hard, showing the miseries of that Spain that was not the one he had fought for, joining the National Uprising from the first moment. And that was also what a convinced anarchist like Fernán Gómez seduced from his text, thus uniting a Falangist old shirt and an anarchist libertarian who already had a CNT card at the age of 15, in denouncing the scourges of that society, the ambition, envy, materialism, hypocrisy or sanctimonious sanctimoniousness, which culminated in a terrible ending, no less tragic for being foreseeable.

“While the current terrible economic crisis has ruined or is on the way to ruin the modest producers, and the working class suffers the nightmare of unemployment like never before, the number of benefits obtained by the beneficiaries of the current order of things, the owners of Banking is very high…” 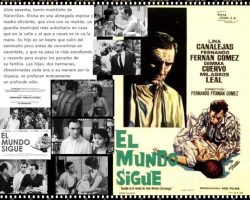 All these are words pronounced by José Antonio Primo de Rivera. There has not been a political, ethical or aesthetic movement in our history like the one he led, whose ideological mortar, the one that gave body to the principles and values ​​he advocated and for which he wanted to fight, was so grounded in man, in the individual as an entity endowed with dignity and spirituality.

The film was prohibited by the censorship in 1963, the year in which shooting was finished, later it was authorized with Fraga in 1965, after softening various dialogues, but those ups and downs with the censorship meant that it was released only covertly and two years after the end of its filming, in the Buenos Aires cinemas in the city of Bilbao, and not in the capital or other large cities and that it was not on screen for more than a few days. Then he disappeared from the map. Only a few spectators had been able to see it.

Only the effort of the son of the actor and director, his granddaughter Helena de LLanos and other people, such as the director Fernando Trueba, managed to have dozens of theaters throughout Spain in 2015, the fiftieth anniversary of its premiere. they will manage to give the world goes on the great premiere that it had never had before and that many spectators, who did not have the opportunity to see it in its day, not only recovered the images shot by Fernán Gómez but also the words written by Juan Antonio de Zunzunegui, so awarded while alive, so forgotten today.

As it is intended to make one of the best Spaniards of all times forget. The one about whom Rosa Chacel said in 1956, being as she was a Republican exiled in Argentina, after having read three hundred pages of her complete works in one go: “Two things are incredible; one, that all this could have gone unnoticed by me, in Spain, and another that Spain and the world have managed to hide it so well. Because it doesn’t surprise me that they killed him: he was made for that, and so that after his death there was silence about his case… ”.

A Spaniard who inspired Zunzunegui’s work like that of so many others, today hidden and unknown to the majority, that man whose eighty-sixth anniversary is the day I write these lines of his vile murder, of his execution, Once again , betrayed and used by those on one side and by the other. The same ones who continue to betray his memory today.
It doesn’t matter, his memory, his inspiration and his example will continue among us. The great Luys Santa Marina already said it in his “Towards José Antonio”: “Against all human logic, with the flow of time, which for days and years almost without feeling, José Antonio takes more and more roots in us and his figure becomes gigantic, increasingly present in our lives, current, eternal, conquering time (…..) to deepen its mark on the soul of Spain…”

The world goes on – SevillaInfo