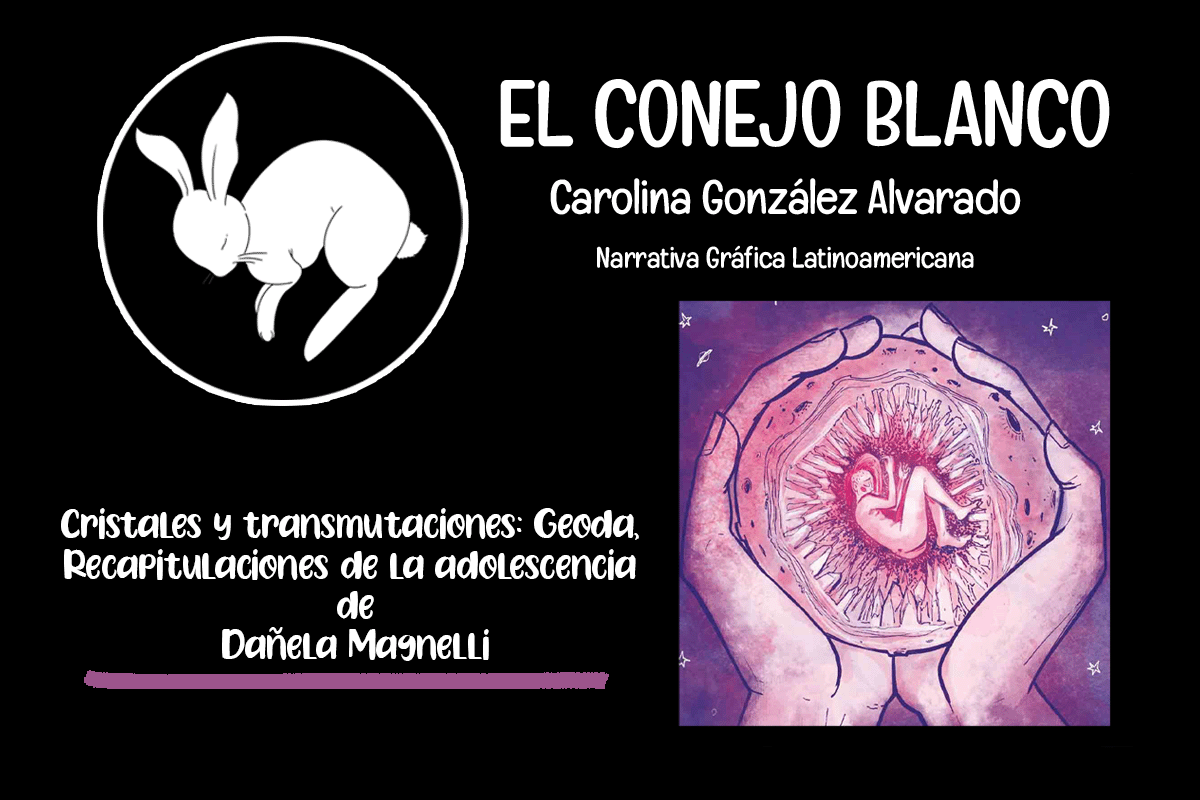 Crystals and Transmutations: Geode, Adolescence Recaps by Dañela Magnelli in the White Rabbit.

Geoda, Recapitulations of adolescence(2021), published by Mafia studiois the first graphic novel of Danela Magnelli. Printed in two pantones, this work is part of the catalog of Mafia studio: a collective of artists and authors of visual narratives, originally from Argentina, which, following the principles of independent publishing, focuses on the publication of graphic art through various techniques that range from risography, screen printing and xylography.

geode narrates the process of self-discovery of the protagonist and exposes the contradictions and complexities that the feminine/masculine pairing brings with it in contemporary society. The story, divided into chapters, refers to a specific age of the narrator and exposes the way in which gender roles condition the body, behavior and identity of the individual.

Appealing to autobiographical details, each of the episodes narrates, through experiences that appeal to the everyday, the construction of the I of the protagonist and how the body influences gender identity. Although the work criticizes the role of gender roles in social dynamics, the importance that the author gives to the body in the public space is notable. In particular, in the chapter titled Pretty girl, 15 years old which recounts the train journeys of the protagonist.

These journeys will be an invasion of the narrator’s privacy. As visually represented on the page, the train carriages coiling around her body will evidence the toll these journeys will have on her. Likewise, the description that accompanies her image will give forcefulness to the violence to which she will be exposed: “The most dangerous thing was rush hour. I tried not to think about it until I got on the train or the train got on me.” Despite the impact that these trips will have on the protagonist’s psyche, one of them would have a crucial influence on the construction of her voice and her relationship with others in the public space.

In an attempt to escape from that confined space where the abuse was concentrated and it was almost impossible to identify the aggressors, the young woman rushed out of the train, but her ankle was trapped between the carriage doors. Her voice, imprisoned by fear, will not be heard until the vehicle starts moving. From this event, which could have ended fatally, she will gain agency and her words will become a way to confront her aggressors while the scar drawn on her skin will be the most forceful painful reminder that her voice will have the ability to rise up in a shout.

Throughout the subsequent chapters, attention will be devoted to the influence of gender roles in the construction of individuality, however, the exploration that the protagonist will carry out on her own identity will be one of the most significant moments of the work as it will represent the transition of a i-fragmented still i-real.

daniela magnelli it takes coordinates from reality to create a visual narrative of the emotional and psychological state of the protagonist. Through memories brought to the present, the author will represent significant moments in the narrator’s life, however, it will be the chapter titled Vortex in which these fragments of the I will materialize in a real-me.

It is precisely in this chapter that the title of the graphic novel, geode, will acquire a symbolic meaning. A geode is a rock that has a cavity whose interior is usually lined with crystals such as quartz, calcite, among others. One of the most interesting features of the geode is its origin, since it is a plutonic igneous rock, the result of the slow cooling of the magma and the depth to which it is subjected; These conditions will gradually allow the creation of large and beautiful minerals.

It is notable that the color palette used in the graphic novel will evoke amethyst quartz, which is found within geodes, and is a crystal associated with spirituality and transmutation. In the graphic novel there is a crucial moment, precisely in the chapter titled Vortexin which the protagonist will have an encounter with her previous identities and, in a process of personal alchemy, she will be able to heal her wounds, face her fears and provide each of them with a magic potion associated with a quality.

The fourteen-year-old will be awarded a vial of strength, the fifteen-year-old an elixir for communication, and finally, the young adult, a bottle of love. It is important to note that these potions have an even deeper symbolic character as they do not come from an external source but from the body and psyche of the main character unfolded in the different stages of her life.

It is precisely here where the metaphor of the geode materializes: just as an igneous stone must remain for a long time in precise conditions to solidify and create these crystals, the I of the narrator must immerse himself in order to discover himself and build his own identity.

geode transits between the world of everyday life and the inner world and it will be from the contact between both that the creation of a real-me it will be possible. In such a way that the denunciation of gender roles, intertwined with daily experiences, will acquire a deeper meaning as those experiences will decisively influence the construction of the I of the protagonist and in the articulation of a particular notion of the feminine.

In this sense, the colors used in the work will be metaphorically associated with the spiritual values ​​attributed to amethyst and, just as the process that gives rise to the geode implies crystallization, the i-real as a protagonist will bring with it an internal metamorphosis in which acceptance and change will be necessary to create one last glass bottle whose content will be the result of new learning.

Cesia, winner of The Academy, between salsa and a spiritual experience: "I had a connection with God...
The promising programming of the Palau de la Música for this 2023
Clean up the coast, finance heritage, do eco
Tweet
Share
Share
Pin