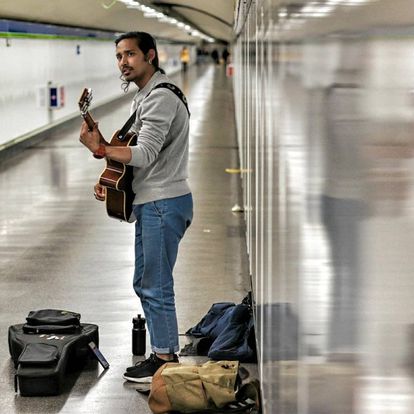 Kishan Adhikari was born in Kathmandu, the capital of Nepal, 31 years ago. In his life there have been many changes, but there are two things that have always remained: music and resilience. This young man has been in Spain for more than nine years and is one of the about 800 Nepalis who live in Madrid. Since he set foot in Europe, she has experienced the difficulties of having a “third world” passport, but she has also achieved great milestones in the world of music and acting.

In 2004, he explains, many young people were getting hooked on heroin in his neighborhood. Some even dying. His mother, worried about his future, supported him to travel to London to study. “Two very young close cousins ​​died of overdoses and my mother didn’t want that for me,” she recalls.

He was 18 years old and had a good academic record. This was the passport that guaranteed him at least a few months of peace of mind as a South Asian migrant in Europe. What seemed like a dream come true soon turned into an obstacle course when he found out that his university had defrauded students. So, he had to look for other options to stay there. “I lost the money I had saved, so I started working to pay for my living,” he says. Soon his residence permit was running out, so he decided to escape clandestinely to other nearby countries. This is how he arrived in Spain for the first time: first Barcelona and then Madrid, where he met his sister, who works as a domestic servant.

Looking for a job was not easy. “They offered me to work in a kebab for 300 euros, freeing only two days a month,” she criticizes. She turned down this job and started singing in the subway. “I’ve been singing all my life and since I was 15 acting in front of people, so I tried my luck. I earned about 50 euros for playing for two hours, ”she says. Adhikari acknowledges that she was very scared. Being in an irregular administrative situation, he feared that he would be detained or deported while he was interpreting. That’s how he earned his living for months and met many people. among them to mimi doubles, now known as Lola Indigo, before her rise to fame. “We spent hours on the subway singing and talking about our experiences, even sang with me a song that I composed“, remember. One day, Doblas told him that he was leaving for a few days to try his luck in a casting, that of Operación Triunfo in 2017. His paths could join, but a role prevented it. “He encouraged me to introduce myself, but being irregular I couldn’t,” he laments.

A colleague from the theater signed up for GOT Talent Spain without notifying him. And to his surprise they caught him

These barriers could not with Adhikari. She continued to sing on the subway and his Spanish improved until he was completely fluent. One day a man was impressed with her voice. Her partner was an actress and she proposed to him to act in the theater where she worked. “It was a challenge to sing in Spanish, but with that job I finally got my residence permit,” she says. But it doesn’t end there. A colleague from the theater signed up for GOT Talent Spain without notifying him. And to his surprise, they caught him. Risto, Edurne and Eva Hache said “yes” to her and highlighted the sweetness of her voice. “They came after the performance and encouraged me to continue in music. They told me that I had a great future ahead of me”, she recounts.

Adhikari began to feel that she was finally enjoying her life in Spain. He was able to work, had a residence permit and spoke the language perfectly. But he hadn’t seen his family for eight years. “To live in Spain, I had to continue contributing and my vacations were not enough to undertake such a long trip,” he explains. So one day he decided to quit his job and spend three months in Kathmandu. Returning after so many years was very impressive for this young artist. “When I left there were power outages for 18 hours every day and when I arrived the power went out throughout the city. I remember seeing my mother in the dark and touching my face, it’s something I’ll never forget”, he says. During those months he took courses on Tibetan bowls and mindfulness or mindfulness techniques that she now practices and teaches in Spain.

On his return, although he did not know it, his leap into acting awaited him. He found a casting where they were looking for actors from Nepal to make a movie. He had never acted, but he showed up to try. And he got it. Adhikari became Ankajithe sherpa from the movie The top, set in the Nepalese mountain of Annapurna. Thus, she met Patricia López Arnáiz and Javier Rey, whom she is very fond of. “I never thought about being an actor, but now it’s clear to me that I want to continue and even direct my own short,” he says.

Adhikari considers Madrid his second home, but believes that his country has “another energy”. The red carpet lights and microphones are actually a small part of his life. Most of the time he dedicates it to working in a chef restaurant. “These years I have learned a lot, although I have only worked, now I want to live,” he says. Likewise, he encourages other people in his situation to follow in his footsteps and try despite the bad times. “I think there is no need to be afraid, I had days when I did not have to eat and others I was on the red carpet,” he underlines. He warns that the downturns are very common, but that the opportunities end up coming. “We are responsible for how we are on the inside, but it is very difficult to control external factors,” he admits.

His latest milestone as an artist has been to be a finalist in the Lalalá program on Telemadrid, in which the best voice in the capital was sought. Now her plan is to go back to Nepal soon and spend a long time with her family. “The streets are chaos, but now I love that chaos,” she jokes. Adhikari hopes to reconnect with the spirituality that characterizes the country of Buddha and continue to move people around the world with the universal language of humanity: music.

The story of the Nepalese Kishan Adhikari: from the underground to the red carpet