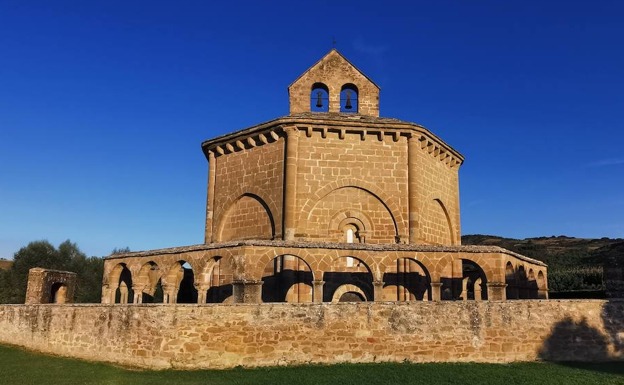 According to The Seven Games of Alfonso X the Wise and Dante’s Vita nuova there were three ways of pilgrimage: by will, vote and penance. In the 21st century there is one more: the magical and legendary. And it is that he Santiago’s road It is an alchemical process in which the traveler-pilgrim, like an alchemist, will discover legends that present to the curious spirit mysteries and secrets to be deciphered, which are a magical-sacred, magical-sacred, and religious discourse, which sew together a symbolic fabric that you have to understand in search of knowledge and transcendence.

Once upon a night in the year 813, tradition and legend tell, when a hermit named Pelayo observed, over the Libredón forest, today Santiago de Compostelasome strange lights. The appearance of the enigmatic luminaries caused the anchorite to go to Ira Flavia -today Padrón- to bring the facts to the attention of Archbishop Teodomiro. Faced with the disconcerting event, they went to the place together, and once there, they found a marble slab, human bones -an ancient Roman cemetery-, and determined that it was the tomb, the remains, of the Apostle Santiago. Legend and tradition were the origin of the Camino de Santiago, the First European Cultural Route, Heritage of humanity by unesco. Today, the Jacobean route, in addition to religion, spirituality, culture, gastronomy or nature, is also magic, mystery and legends, which have been forged throughout its twelve centuries of history. And the following are some of the most important that the traveler-pilgrim will find at the foot of the Camino.

Navarra: Charlemagne, Roldán, the Virgin of Roncesvalles and Eunate

In Navarra -the main entry route of the Jacobean route to Spain from Europe-, the town that is the departure point for thousands of pilgrims every year is Roncesvalles. Its origin and name are linked to the legendary battle that ended the life of Roldán and the Twelve Pairs, knights of Emperor Charlemagne. According to legend, they would be buried in the Silo of Charlemagne, next to the Royal Collegiate Church of Santa Maríaa temple that keeps, in its museum, an object linked to this passage of the medieval epic: the chess with which Charlemagne was playing, according to the Song of Roldán, when he heard the sound of Roldán’s olifante (ivory horn) asking for help.

The ‘Queen of the Pyrenees’ is venerated in the sanctuary, the Virgin of Roncesvalles. The carving was miraculously found by a shepherd after the appearance of some lights and the prophetic dream – he indicated the place where she was hidden – of Bishop Sancho from Pamplona. After Pamplona and the ascent of Alto del Perdón -whose name is due to the fact that here pilgrims who could not continue their journey obtained indulgences in the disappeared hermitage of Santa María- the path reaches the octagonal hermitage of Santa María de Eunate, the ‘Temple of a Hundred Doors’. Its portico, with astronomical references, has a twin, today located in the church of Olcoz. According to legend, he was chiseled by a stonemason in three nights with the help of a witch who revealed the secret to doing the work; take the grail, water from the nearby river and on a full moon night, use a glass and liquid as a mirror.

In Aragón -the Camino’s second entry point from Europe-, the traveler will come face to face with the legend in Villanúa and the Cueva de las Guixasgrotto in which the Aragonese witches met to celebrate their covens, and later, in the Monastery of San Juan de la Peña, the Castle of the Grail. Monastery founded by the hermits Voto and Félix, who found the remains of San Juan de Atarés, the first hermit of the place, in which the Templars guarded the Holy Grail, today in Valencia. The path leaves Aragon and enters Navarra. He does so, before reaching Puente la Reina, where the paths become one, first through Javier and his castle-birthplace of Saint Francis Xavierin which the Christ of Javier is venerated, of whom legend has it that he sweated blood the day the saint died-, and later by the monastery of Leyre, the monastery of abbot Virila, a time traveler, of whom it is said who went out to pray and disappeared for three centuries.

In Puente la Reina -where the two entrance branches of the Camino de Santiago meet-, the traveler-pilgrim will be received by the Cristo de la Pata de Oca, a unique carving that according to legend was given as a gift by some German monks in gratitude for the town for having been cured when they fell ill, and will leave the same for the Pilgrims Bridgewhich gives its name to the city, to which, as legend has it, a little bird would come every morning to clean the image of a Virgin, the Virgen del Txori.

The path continues to Estella, whose origins are linked to the vision of some lights by some shepherds and the discovery of the Black Madonna of Puy, a legend that has been reflected in the city’s coat of arms and in the Al Auroro monument. Later, the route reaches the Monastery of Iratxe, of which San Veremundo was abbot, an illustrious character of the Jacobean route, patron saint of walkers and of the path in Navarra, confessor of García el de Nájera, friend of Sancho el de Peñalén and adviser to Sancho Ramírez, of whom the legend tells that he collected food for the pilgrims and one day, surprised by the abbot with his skirts full of food, piously lied saying that he was carrying flowers, at which time roses fell from his habits. The road leaves the lands of Navarra for Bargota and Vianaterritory of the witch priest Johannes, called ‘Juan sin sombra’ or ‘Witch of Bargota’, who died in praise of holiness, of whom legend has it that he was able to fly through the skies, make parts of his body invisible, appear in different places, coming to be stopped in the 16th century by the Holy Office.

There are two key places and legends that the pilgrim traveler will find in La Rioja. The first, the city of Nájera and the Royal Monastery of Santa María, inside which the Black Virgin of the Jar or Azucenas is kept and venerated, in the same cave where, according to legend, it was found by King García Sánchez III when he observed some lights in the skies while hunting that led him to the cave inside which was the virgin carving with a jug with lilies, a candle and a bell. The second, Saint Dominic of the Causeway, the ‘Riojan Compostela’. Cradle of the saint and builder, the hermit Domingo García, in whose cathedral there is a chicken coop, with a rooster and a hen, which commemorate the miracle of the ‘chicken that sang after being roasted’. It had as its protagonist the German pilgrim named Hugonell, who after spending the night in an inn, was accused of robbery by a spiteful tavernkeeper, being arrested and executed by hanging. After his death, he appeared to his parents demanding justice. The parents went to the commander to tell the facts, who, after hearing the story, stated that his son was guilty and was as dead as the rooster he had on the table, at which time the bird came to life, crowed and flew away.

In the three provinces that the Jacobean route runs through Castilian lands, many legends come our way, but these are key. In Burgosin the capital, that of Santo Cristo, the ‘Lord of Burgos’, who is kept and venerated in the St. Mary’s Cathedral, the ‘Spanish Notre Dame’. It is an articulated carving, made of buffalo skin and human hair, which according to legend was discovered by a merchant floating in the ocean waters in a wooden chest and later given to the Augustinian monks. In Palencia, in Carrión de los Condes, that of the ‘Monja de Carrión’ or ‘Brown Lady’, Sister Luisa de la Ascensión, who is said to have the gift of bilocation and prediction of the future, abbess of the Monastery of Santa Clara. and in the San Zoilo Monastery, that of the ‘Tela de la Condesa’, a Muslim loom-relic that would have wrapped the remains of the saint and that was taken from Abderramán. In Lion, in the Cathedral of Santa Maria, the legend of the secret of the philosopher’s stone, discovered by the alchemist Nicolas Flamel. According to what is said, he would have left it hidden in the stained glass windows of the temple. And finally ponferradawhich was a Commandery of the Order of the Temple, whose Castle of the Templars It is linked to the Black Virgin of La Encina, found while the knights were cutting down trees to rebuild the fortress.

In O Cebreiro a chalice and a paten are kept in the Church of Santa María, protagonists of a Eucharistic miracle in the 14th century, reflected in the coat of arms of Galicia. According to legend, it happened one stormy night in full mass. The priest thought that no faithful would attend the liturgy, at which time a neighbor arrived. During the Eucharist, the sacred forms were attached to the paten as a heavenly sign in the face of the religious’s lack of faith. In the cathedral of Santiago, where the tomb of the apostle is located, the traveler will find at the base of the Portico of Glory -main entrance until a few years ago-, a tomb, that of Archbishop Pedro Muñiz. Nicknamed the ‘Necromancer Archbishop’, he not only consecrated the temple but also, according to legend, he had the ability to appear and disappear, for which he came to be tried by the Inquisition.

Already in finisterre, goal of the Camino de Santiago, everything is legend. In the church of Santa María, the traveler-pilgrim will find the Christ of the Golden Beard – an articulated carving, made with buffalo skin and human hair, which according to legend arrived floating through the waters in a chest – and in the cape, in the Km 0, the old End of the World, will contemplate the oceanic waters where the Celts located the afterlife, the Greeks affirm that the Garden of the Hesperides was and the Romans built the Ara Solis, the Temple of the Sun.