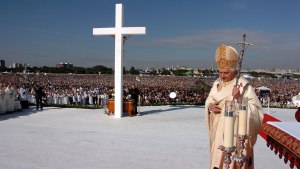 A man of paradox, a gentle and humble pope, Benedict XVI never ceased to surprise by preaching the love of God and faith as an encounter with an event and a Person who gives life.

Benedict XVI died the day the Church meditated on the prologue of Saint John: “In the beginning was the Word” (Jn 1, 1). This prologue refers to the first verse of Genesis and indicates that Jesus is the Word of God who has existed from all eternity. What a beautiful text for the day of his death, he who so loved and sought the Word made flesh! He arrived where it all begins, reuniting in the light of Christ with his family and friends, as he wished. How to take stock of the 95 years of life? Let us note only five points of his spiritual and theological heritage.

The return to God

Giving priority to God in our world where relativism reigns supreme is a defining feature of the pontificate of Benedict XVI. In the interview book light of the world (2010), where he confidently confides in the journalist Peter Seewald, the German pope affirms: “Today, the important thing is that we see again that God exists, that He concerns us and that He respond “. It shows that true faith in God fosters respect for others, promotes peace and values ​​religious freedom. Otherwise, it becomes an ideology serving a political cause that too often alienates humanity.

At the origin of the fact of being a Christian, there is not an ethical decision or a great idea, but the encounter with an event

His first encyclical God is love (2006) surprises everyone, because it gives us its deep mystique. He begins with this quotation which he considers to be the center of the Christian faith: “God is love: he who abides in love abides in God, and God in him” (1 Jn 4, 16). He continues: “At the origin of the fact of being a Christian, there is not an ethical decision or a great idea, but the encounter with an event, with a Person who gives life a new horizon and thereby its decisive direction. After love, he published two treatises on the other theological virtues of hope and faith: “Man needs God, otherwise he remains deprived of hope. »

Center everything in Christ

According to his private secretary Bishop Georg Gänswein, the last words of Benedict XVI, spoken on the night of December 30 to 31, 2022, were: Signore ti amo (in French “Lord, I love you”). His deep attachment to Christ led him all his life to the essence of Christianity: God reveals himself in Jesus who gives meaning to our life. He wrote to seminarians on October 18, 2010: “God is not a distant hypothesis, he is not a stranger who withdrew after the big bang. God showed himself in Jesus Christ. In the face of Jesus Christ we see the face of God. »

He devotes three books to the figure of Jesus of Nazareth and his message, he who came to fulfill the Scriptures. He shows that Christian existence consists in believing that the love of God is among us in the risen Jesus and that we are worthy of being loved, hence the importance of becoming loving souls, as he says in Seewald in The Salt of the Earth “What we really need are people who are internally inhabited by Christianity, experience it as happiness and hope and have thus become loving souls. »

Sweet and humble of heart

A free man, endowed with great intelligence, Cardinal Ratzinger stepped into giant shoes by succeeding his friend John Paul II. Less media than him, he nevertheless marked the spirits by his discreet style, full of sweetness and humility. He had an ability to listen that seduced his interlocutors, which did not prevent him from deciding when it was time, even if it was not unanimous. In his will, written on August 29, 2006, he humbly asks for forgiveness: “To all those whom I have wronged in one way or another, I ask forgiveness with all my heart. »

A man of paradoxes, the great theologian stuck to his motto: “So that we cooperate in the publication of the Truth.”

Having no greed for power, he remained meek and humble to the end, praying and offering what he lived for the Church. Pope Francis often visited him in friendship. During the Vespers homily on December 31, the very day of his death, he evoked the kindness of the German Pope, giving thanks to the Lord for “all the good he has done, and above all for his testimony of faith and pray “.

Concern for the truth

A servant in the vineyard of the Lord, the pope emeritus will have been at the head of the Church for almost eight years, before renouncing his Petrine ministry to retire in prayer. This decision took everyone by surprise and will have a great impact in the history of the Church. We have thus seen two popes, with different styles and characters, but having at heart the unity of the Church and the concern to tell the truth, without separating faith and reason.

A man of paradoxes, the great theologian stuck to his motto: “So that we cooperate in the publication of the Truth.” What a challenge for him to hold together tradition and novelty, old time and new time, discretion and innovation. For example, some reproach him for his condemnation of liberation theology or his closure to the question of the ordination of women. Prefect of the Congregation for the Doctrine of the Faith for 23 years, he was often confined to the caricature of an intransigent “Panzerkardinal”. This cliché did not hold water when he became pope, serving the Church with joy and authenticity, which appealed to young people.

A man of peace and dialogue, he reached out to everyone, without forgetting the victims of sexual abuse whom he met on several occasions. He showed lucidity in the face of the scandals of pedocrime and corruption in the Church. It was certainly one of his greatest sufferings, as it is for Pope Francis. He faced the turmoil by wanting to shed light on this sad page of the Church, hoping that this purification announces a coming resurrection.

The Protestant Reformation: impact and values
A book reviews the life and work of Osamu Tezuka, the "god of manga"
State design and national reality
Tweet
Share
Share
Pin