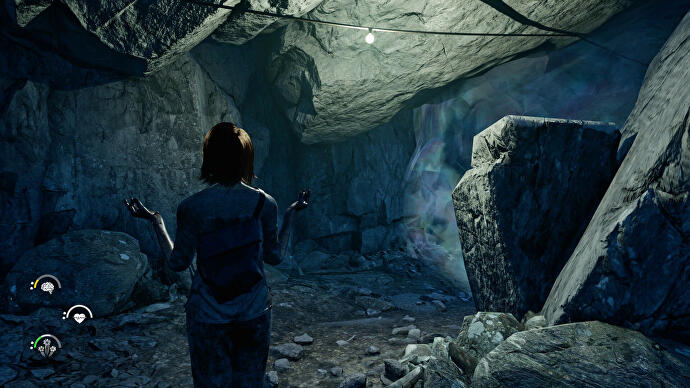 The genres of artistic productions, like culinary recipes, tend to get more complicated as we introduce more elements into the formula. The base of a shooter, like that of a good cake, is not made up of too many elements… if we reduce everything to the minimum expression, of course. A character, a stage, we sprinkle a pinch of weapons and another of enemies and we already have all the essential elements. Now, if what we want is a looter shooter of science fiction with levels set in the different rings of Saturn, it is clear that on our simple base we will have to place some more elaborate elements. It is clear, then, that a greater complexity in our proposal will require that a high level of attention be paid to the elements surrounding the core – and whether we refer to the playable, the design or both – that will support the framework of our work.

So, following this logic, the psychological horror story with touches of folk and reminiscent of the horror movies of the seventies that The Chant proposes to us should be surrounded by mechanics and details of the highest school, right? Well, that’s what this analysis is about.

I was as far away from my environment making analogies about kitchen issues in the introduction to this text as our beloved protagonist, Jess, is in the spiritual retreat to which she is doomed from the first bars of The Chant. In any case, Jess reluctantly goes to the island that hosts him to see if he is able to recover, on the one hand, his mental stability and, on the other, his battered friendship with Kim, one of his best friends from all over the world. life from which it has been distanced. From the weak state of the first we receive clues as soon as the game begins, since we will see how Jess is assaulted by visions of a corpse floating in the water while she goes out for a run. And that the terrible state of her friendship with Kim is intimately linked to these visions is something that the plot itself will gradually let us see. However, Kim is able to convince Jess that the best thing for her situation is to take refuge from the madding crowd on an island whose continent is paradisiacal but whose content casts a multitude of shadows: a community friendly to the consumption of psychotropics, a leader, Tyler , with charlesmanson images and rituals that fool around with forces from beyond. Bad vibes, bro.

How could it be otherwise, the mixture of lysergic substances and forbidden rituals causes one of the latter to go off the rails in a spectacular way, unleashing the energies of the Plane of Darkness on the island where Jess and the rest of the members of the group are located. this suspicious retirement with important indications of sect. What there is no doubt about is that if the Plane of Darkness looms over the protagonists, something will have to be done, and Jess, of course, will be the one to take the initiative. From here is where The Chant shows her hand and, therefore, the vast majority of mechanics and dynamics that support her.

And it is that The Chant, despite what its plot, artistic section and setting might suggest, is quite far from what we could consider a survival-horror in the classic style. And despite the fact that, if we are clueless, more than one scare – and two – can hit us, its much closer approach to the action, the linearity of its scenarios or the simplicity of its puzzles places it in a much closer territory. to a Resident Evil 4 than to, say, Silent Hill 2.

However, The Chant does try to move away from the Capcom classic by introducing its own elements into the mix. It doesn’t take much time with Jess to realize that she is the complete opposite of Leon S. Kennedy, both in skills and in the resources available around her. Although we will be able to collect the objects that we find on the island, these will be far from the classic weapons, ammunition and other destructive elements that we are so used to. Instead, herbs, oils and other paraphernalia more typical of Nature will serve us to create traps, heal ourselves or make mystical knickknacks with which to return to their Kingdom of Terror – or wherever they live – an imposing list of aberrations, each which more unpleasant: giant toads, possessed cultists and vegetation twisted by the beyond that comes to annoy the hereafter.

This trail of hair-raising visions will, of course, take its toll on a Jess who, as we knew in advance, already came to this retreat transformed into a mass exorcism in precarious mental health. Thus, spending a lot of time in the areas possessed by The Penumbra, in absolute darkness or enemy mental assaults will affect our heroine’s sanity and we will have to get away from these situations to, sacrificing spirituality, recover peace of mind through meditation. or consume a good herb that appeases our ills. All this, of course, while we avoid enemy attacks so that our health – that of a lifetime – does not drop to zero and we see our protagonist die, at the hands of some improper entity of this reality.

These ideas – the fragility of the protagonist, her unorthodox weapons and having to pay attention to three meters linked to each other -, added to an incontestable artistic direction, which serves as a counterweight to an improvable technical section, should have been enough to leave in a good place the proposal of a title without excessive pretensions. However, its playable immediacy ends up being a factor against it if we add to this obvious errors when it comes to posing the enemy AI – a large part of the opponents limit themselves to patrolling their area and will not chase us if we leave it – or they will ridiculous it can be that we are able to meditate a few meters from an enemy who is the embodiment of our own traumas.

In short, The Chant is a title that ends up throwing as many lights as shadows on its striking initial approach. Despite the fact that it introduces interesting mechanics and ideas and its artistic section borders on a very high level, the simplicity of its dynamics and the obvious flaws that it drags will dissuade those who are eager for experiences close to horror with greater depth. However, players who want a direct title, with folk overtones and with references like the ones we have mentioned, may find the removal of The Chant a good feeling.