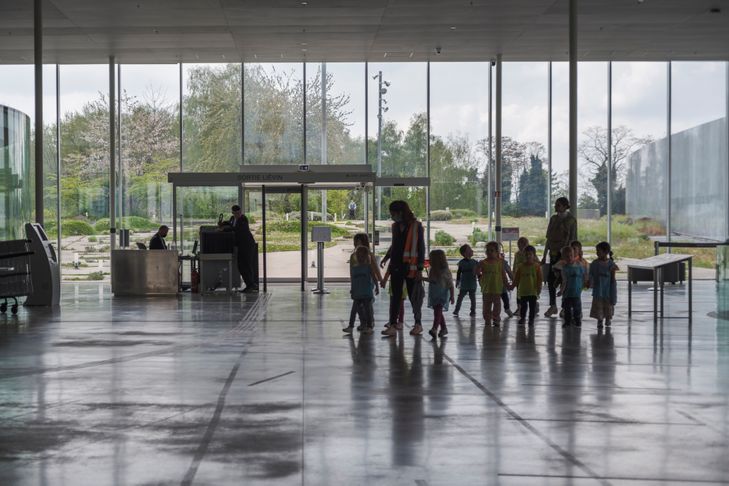 “Welcome to the neighbors cafe!” » This November morning, around twenty residents of the district responded to the Louvre-Lens invitation. Évelyne, mediation project manager, details the festivities for the 10th anniversary of the museum, on December 3 and 4, the day of Saint Barbara, the patron saint of miners.

The organizer of the neighborhood center evokes an upcoming workshop with a writer, where everyone can imagine a dialogue with their favorite work. “What would you say to scouting around the collections exhibited at the Galerie du Temps? », says Évelyne, certain of the appeal of the 200 masterpieces on loan from the Louvre. Frank, a former worker in the plastics industry, cannot resist it. ” In the beginning, I thought this museum was not for me, he confides. Then, little by little, in the Galerie du temps, I discovered all these old objects. To think that men carved this with very simple tools fascinated me! »

At the Louvre-Lens, 20% of visitors are workers or employees. This is 6 points more than the average for French museums. Here, 18% of the public also say “little or not accustomed to visiting a museum”. So, to break the ice, Marie Lavandier, its director, went into overdrive. “The image of the Louvre is intimidating and at the same time, in the mining area, it carries immense hope, she explains. This forces us to rethink the use of the museum. »

A museum committed to social priorities

As soon as he arrived in 2016, the scientific and cultural project was overhauled, to involve all the employees but also dozens of inhabitants of the agglomeration. And after a year and a half, five commitments have been defined, well beyond the traditional cultural and educational mission of the museum: to fight against exclusion, against dropping out of school and for access to employment, against illiteracy, against gender inequalities and against health inequalities… “Here, the importance to be given to those around us is crucial”, insists Marie Lavandier. In the agglomeration, 25% of the population lived, in 2018, below the poverty line.

To meet this audience, often removed from classical culture, the Louvre-Lens has removed fences around its 20-hectare park. Every summer, he organizes dozens of sports and leisure activities there for all those who are not leaving. During the last All Saints holidays, its mediators and reception agents went to two large shopping centers to offer games, a virtual reality visit to the Abu Simbel temple, presentations to young people of museum trades, etc.

The Louvre-Lens also chartered an “Egyptobus” to present its “Champollion” exhibition. Nice coincidence: on November 9, the museum welcomed its five millionth visitor, Lou-Anne, 11, who came with her mother, after crossing paths with this Egyptian caravan. A “brigade of switches”, trained to advertise the museum through small sketches, even intervenes regularly at the post office, in buses, at the university or at the hospital. “We are a bit like missionaries! Everything is good for humanizing the museum and breaking down barriers,” underlines Gautier Verbeke, who directs about thirty mediators, the largest battalion of the Louvre-Lens.

The free time gallery is another magnet. Without it, 27% of those who pass through the doors of the museum declare that they would have given up their visit, like Jean-René, a retired resident of the mining town.. “I have never seen the temporary exhibitions, he confides. I wasn’t used to this sort of thing. » Making the public feel at home here is sometimes down to the details. At the Louvre-Lens, you can enjoy your picnic in one of the transparent bubbles in the reception hall, read a comic strip in the media library, attend a concert or watch a film.… Even the reception staff’s attire has been changed to more casual sneakers and a T-shirt with the words “welcome” in different languages.

“Here has become our home”

As for the range of activities on offer, it ranges from “guided jog” in the park at “the awakening of toddlers” going through a session “tattoo” for teenagers and “sound naps”without forgetting “disguised weekends” at each temporary exhibition! “Here, it has become our home. They don’t look down on us.” explains Martine Germa, delighted to have been able to exhibit at the Louvre-Lens with her Liège association Femmes en avant, for International Women’s Rights Day in 2016. Since then, “Every year, on March 8, we host workshops there. We created a game on gender equality with young people…”reports the former school principal.

The Cité Jeanne-d’Arc, a mining district, is attached to the museum. / PABLO BAILLEUL

Building on this participatory approach, the Louvre-Lens even associates visitors with the design of its own exhibitions. “Some curators are reluctant to have to modify their texts on the explanatory panels after proofreading by these test groups, but this dialogue is rich in lessons for us”, insists Marie Lavandier. With the help of an association for the fight against illiteracy, other texts “easy to read and understand”written without Roman numerals and in large type, have been added.

Here, 100,000 schoolchildren are welcomed each year. And the museum multiplies the projects with external partners: social centers, prison establishments, hospital center of Lens Liévin… Nurse in child psychiatry, Denis Martel is delighted: “Our teenagers, isolated, a little phobic, often find it difficult to venture into the public space. They have found a protective place in the museum. » The Louvre-Lens even plans to create an exhibition space in the new hospital which will open in 2026! Another original collaboration with Pôle emploi has made it possible to welcome young people looking for work, long-term unemployed people, to the museum. “Accompanied by a psychologist, we work with them on how to document a work, how to present it in public”, says the director of mediation. A way to restore trust.

The museum has just taken a further step with an “Intimate and Me” exhibition, entirely designed with around ten students sent by the Local Employment Mission and young school dropouts. Still juvenile blonde face, Maxence admits having “At the start, it was difficult to take over the project”. A year later, here he is perfectly at ease describing this creative adventure at the “neighbours’ café”. His dream ? “Practicing a profession in the arts or in the social sector. »

A festive weekend. Animations, workshops and scintillating lighting: the Louvre-Lens is having fun for its 10e anniversary. On Saturday December 3, the Carabosse company will ignite a musical stroll in the park before a DJ set by Alex & Annie at the Stage. Sunday, December 4, it is Rosemary Standley, the singer of the group Moriarty, who will conclude the party.

A photo report. Photojournalist, Pablo Bailleul carried out a report with the inhabitants of the mining town, close to the Louvre-Lens. Their sometimes delighted, sometimes critical or even hostile reactions to their cumbersome neighbor are brought together in a beautiful portfolio:

Ten years of the Louvre-Lens, betting on a museum for everyone