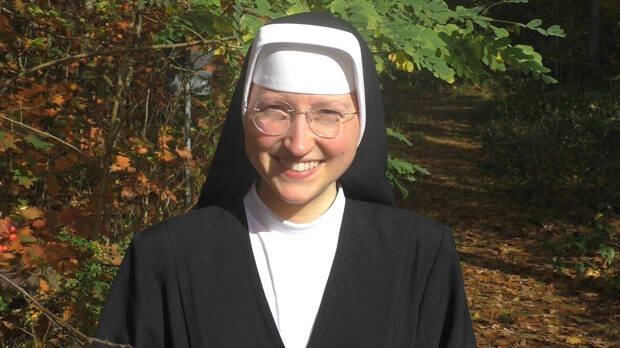 On her way, between lights and shadows, she has tasted the joy and certainty that God has everything in his hands.

The Liturgy of the Hours, the prayer of the Rosary, the Holy Mass and the work as an educator are part of her daily life. But this was not always the case, because Sister Veronika – whose birth name was Franziska Gresik – grew up a Protestant.

An only daughter, originally from Bayreuth (Bavaria, Germany), the family occasionally attended religious services. “Faith did not play a special role,” says Sister Veronika. Nonetheless, she enjoyed praying every evening, as she had learned to do as a child.

After finishing high school, Franziska began studying social work in Würzburg. At that time, she “seeked fulfillment in my tasks, in my circle of friends, in my family,” she says. But in the intimacy of her soul she longed for something more from her life. “She felt that there was always a void, despite all the good that I was allowed to experience.” Before beginning her studies in Würzburg, she went on vacation for a few days with a friend who was Catholic and who later would be her Confirmation godmother. There Franziska discovered in the testimony of this friend, the valuable and real dimension of veneration -love, reverence, respect- that Catholics express to the Virgin Mary, the favorite mediator to reach Christ and model of the worship of God. As a sign of that first awakening to the Catholic faith, since then she began to wear a Miraculous Medal around her neck. After that trip and fulfilling a long-cherished dream, she went to Ireland for six months as an au pair.

God has everything in his hands

Far from her friends, her land, her family, Franziska in Ireland experienced the certainty that the Virgin was with her at all times. Her innate curiosity then led her to investigate the “miraculous stories” of Mother Teresa and the “Virgin Mary of Guadalupe”; It was so that she discovered the prayer of the rosary that soon -after getting a little guide book- she began to pray it. To the rhythm of the Hail Marys, of meditating on the mysteries of the rosary, he spiritually experienced abandonment from faith, liking that “not everything depends on me, but that God has everything in his hands, that I can entrust myself to Him”, he points out. Her relationship with Jesus began to grow, she “became more personal and more alive,” she confides.

“This was my path to the Catholic Church. In the process, I also heard testimonies from converts and sisters on YouTube who moved me a lot with their words,” he adds. As he progressed on her path of conversion -he recalls-, her longing for the Eucharist and to give her life entirely to Jesus grew in her.

Time passed, he received the appropriate formation and was sacramentally incorporated into the Church, receiving the long-awaited First Communion and Confirmation. She had a good job, she was Catholic, she liked the benefits of receiving the sacraments, she felt grateful, but she, Franziska, needed more of this mystery, God, that she was just beginning to like.

“One day, while sitting on the sofa, this desire to leave everything for Jesus became powerful in me again.” And she came to mind a quote from Saint Teresa of Ávila, who said: “Only God is enough!”. With the will to search for answers and thanks to several unexpected events, Franziska finally traveled to meet the community Schulschwestern von Unserer Lieben Frau (Educating Sisters of Our Lady) in Auerbach (Germany), with the intention of proving her vocation. “I immediately felt at home, I really liked the community of the sisters and the joy they radiated.”

The Eucharistic and Marian seal of spirituality that identifies this Community of consecrated religious was gravitating to Franziska. And it was during an hour of adoration that she was able to have clarity to make a decision. She remembers that in praise of God in the exposed Blessed Sacrament she prayed the verse “I adore you… You, God, who have loved me!”. Then, she asked him what she wanted and what she needed it for. In the serene silence of the soul she had her answer: “I understood that He was calling me to this community”. Many thoughts raced through her mind, but her decision to leave her job, her apartment, and move to Auerbach to get to know the community better, gave her great peace.

Today, Sister Veronika -professed on September 5, 2020- lives in abandonment to the will of her beloved, God. The most important thing for her -he comments- is her prayer, her intimate relationship with Jesus. “From there everything else derives. In this way, our actions can become fruitful for all those who are entrusted to us. Life in a community of sisters is also important, because in coexistence you learn a lot. I am happy and inexpressibly grateful to belong to the Catholic Church, to which I converted very consciously”, he concludes.

Sister Veronika was a Protestant. The thirst for the Eucharist, the Virgin and the prayer of the rosary guided his conversion